When reading for fun, do you usually choose fiction or non-fiction? Do you have an idea why you prefer one over the other? 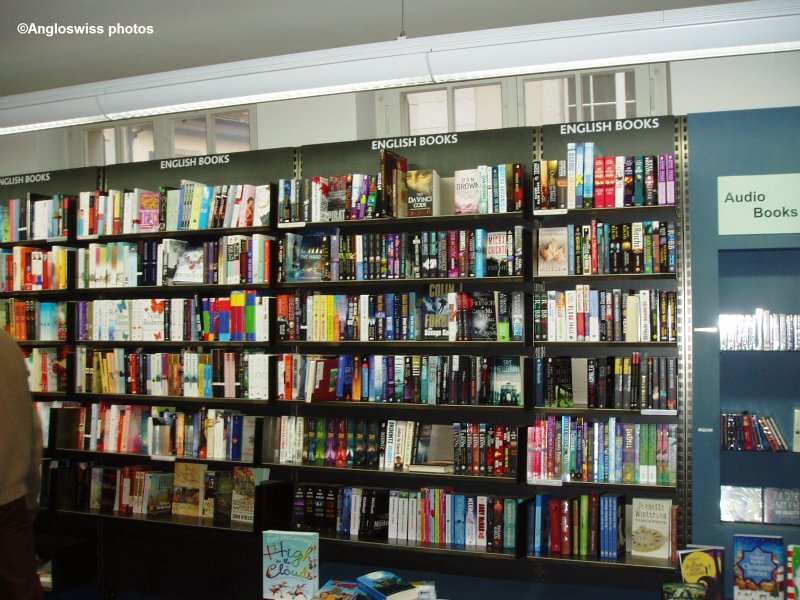 Reading for fun? Yes, I suppose I do, but it is an ernest task reading a book, although reading books is almost a thing of the past. The photo is of our local bookshop in the Swiss town of Solothurn. For the English section in a German speaking environment, it is quite large. They cater for a bit of everything, although if there is a certain special book you need, then you order it. Delivery in a few days usually, and the order can be placed online with no postal charges – a very good service and one I often used.

Today this is for me a thing of the past. Upload the book you want from Amazon to your Kindle (usually) if the price is right. It takes a few seconds with their so-called Whispernet. If the app is on your iPad, all the better and you have your own little library in your hands.

I have been reading since “The Cat Sat on the Mat” my first school reading book. My cats never sit on mats, but we got rid of the mats as we have tiled flooring. My cats do not even sit on the floor (somehow beneath their dignity), they prefer a comfortable chair, bed or place in the shadows outside. The person who told the first story I read in the Beacon Readers series was not in the picture. However, due to my hunger for words, facts and wanting to know more I progressed to the stories of “Janet and John”. They were part of my life – was this fiction or fact? The author did not seem to find this important to know, but after a while I found that Janet and John led a boring life. They lived in such perfect harmony together, never an argument and according to the pictures in the book their surroundings were something like Nirvana. Always blue skies, a perfect place to play and they never had an argument. I think this was fiction, but at the beginning I was just eager to continue to book three. That had a  cover with chickens. I thought at last I would discover how to roast a chicken after Janet’s father demonstrated the sordid details of killing the chicken.

I am diversing. So were these books the facts of life? No, they were the books that were kept somewhere in another bookcase that I discovered when I realised that there was something called non-fiction.  There was a lot of talk about eggs being fertilised, but the books (in the 1950’s) never told you actually how it was done and mum would put the book away and tell me I was too young for that sort of thing. My thirst for knowledge was stifled in my infant days.

As the years passed I was a regular visitor to the library. The family philosophy seemed to be “why buy books when they are free at the library”. I was fascinated by Sherlock Holmes. Imagine my disappointment when I discovered he was not real. Now and again I would borrow an illustrated encyclopedia from the library. Did dinosaurs really exist? Of course and I knew more about them than our pet cat Whisky. I heard about an author called John Steinbeck in my early teenage years and discovered his books at the library. I read them all. John Steinbeck died in 1968. I remember mentioning it to my mum. “Who’s he?” she said. Wise words which shows that my background was steeped in literature.

The school rescued me to a certain extent, where I learned there were classics, but we had to read those books for an exam, so that destroyed my interest from the beginning.

Today I read almost everything, be it fiction or non-fiction, although more fiction. My last non-fiction was half of a book called “Darm mit Charme” which is a german book, translated into English “Intestine with charm” from a young German lady who studied medicine and tells you the true facts (including the less digestive ones) about the recycling process in the body with all the details. It was a best seller in Germany. I stopped half way but intend to finish the book. That is the advantage of non-fiction, you can stop and do not miss part of the story. Ok, the events in a digestive system are not exactly exciting, but it was described in an interesting way.

Another non-fiction I enjoyed was “The Great Stink” telling of how Sir Joseph Balzagette cleaned up the sewage system of London, a book I gladly recommend. The area where I originated, in the East of London, was a stunning example of a sewer at the time and typhus epidemics often broke out in the 19th century.

Otherwise I read Stephen King sci-fi, I am a great fan of Ken Follet who writes novels with the accompanying historical facts. Mr. Swiss is also an avid reader and we often exchange books, although he downloads English books on his iPad in German, I prefer to read in the original English. It is quite often that we have the same books in two languages. I can read German perfectly well, but I prefer a German author. I like to read original books, although the complete Kurt Wallender books from Henning Mankell I read in German as I cannot speak Swedish and Mr. Swiss already had them in german.

Something tells me to stop, otherwise I will be boring you all about my taste in books, which is probably not yours. Curling up with an iPad in the evening is more fulfilling for me than looking at some TV programme. I have just finished Stephen King’s “Under the Dome” and it is running on the TV at the moment. Even Stephen Spielberg helped out with the film. I decided not to watch it until the book was read. The book is now finished but I have already progressed to a free upload of an English book “The Ghost in my Bedroom” by Heather Jones. Not a long read, but something to carry on with and keep me out of mischief.

Enjoy your next book, have a good read and don’t forget to mark the place in the book where you stopped (if your have a real one with covers and pages).