How are you at receiving criticism? Do you prefer that others treat you with kid gloves, or go for brutal honesty?

Before I start to write my immaculate words of wisdom on this theme I want to say HAPPY BIRTHDAY DAD. Yes my dad is 99 years old today. Born in 1915 when there were no computers, not even television, just something called radio, he grew up in the East End of London. In 1939 his country needed him in the army to fight a war. He was not really asked if he wanted to, but he joined in with all the rest and did his bit. After the war he got married to the lady he met once in on leave, who became my mum. He now lives in London. He can no longer walk so well, but is very well cared for in his own apartment and can still manage to have an argument with me on the telephone, although he does not hear so well. We get on like a house on fire, not always having the same opinion, but that is the spicy part of my dad.

Here we are together on my last visit sometime in March. 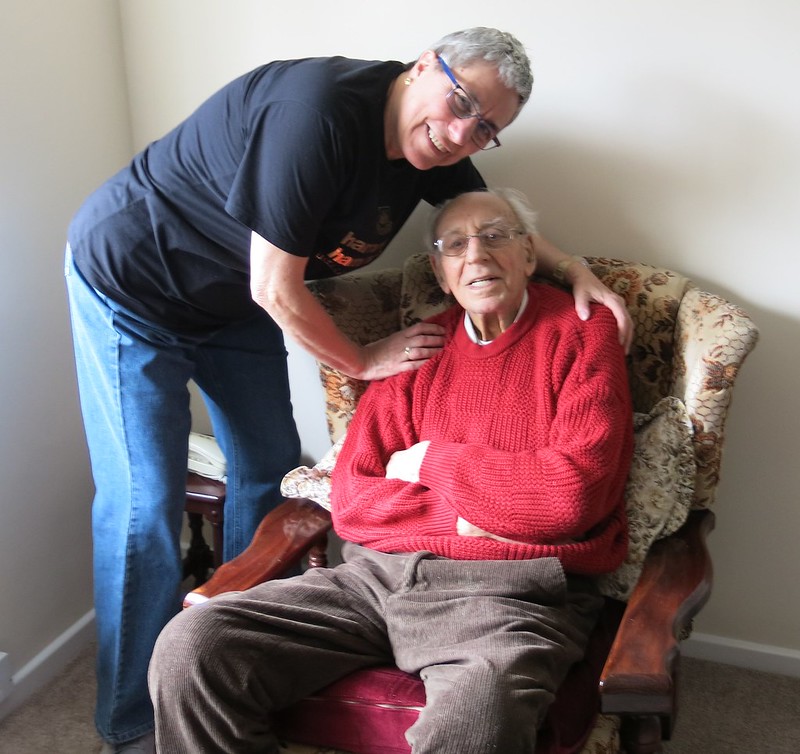 And now to the daily prompt, which will be rather short. I generally do not receive criticism as I am so perfect and I am really too old for criticism. If someone wants to criticise me, then it is their problem not mine. There is simply nothing to criticise on me. I do everything correctly. I always say the right thing at the right moment. Now and again I might be misunderstood, but these are really misunderstandings. If someone finds I am not saying what I should or doing what I should, then it is their problem, not mine.

As I said, it very rarely happens and if it does it is not my problem. Of course it might be that one of my felines disagrees with my methods. Yesterday evening after a tiring day at the Angloswiss mansion I was ready for a quiet evening reading a book in my favourite armchair, the one that fits the luxury curves of my streamlined body. Do not disagree, I hate people that disagree with me, do not forget, I am perfect. Anyhow one of my felines had decided to choose my armchair for a long sleep: one of those ten minute lick wash, turn three times in a circle and settle down sleeps with the head resting on the legs in a curved position.

This was my chair, so I spoke in meow to my feline Fluffy. Fluffy ignored me and continued sleeping. Was I to sit on a lesser comfortable chair whilst my place was occupied by one of my four legged meow speaking friends? I picked up Fluffy with care and carried him to another chair, just as comfortable for a feline, but not the chosen chair. Fluffy awoke, made some negative noises and immediately left the second choice chair where I placed him, as if to say “No, not with me. I sleep where I want to sleep.” I took my rightful place in my chair and Fluffy had the expression on his feline face which I could define as “if looks could kill”, but luckily feline have short memories and Fluffy eventually curled up next to Mr. Swiss who was resting his legs which he now had to share with Fluffy.

And now I have to leave you all. I have a telephone call to made to London to wish an elderly gentleman Happy Brithday.

Daily Prompt: Handle With Care – I am perfect, at least I think so