Are you a picky eater? Share some of your favorite food quirks with us (the more exotic, the better!). Omnivores: what’s the one thing you won’t eat? 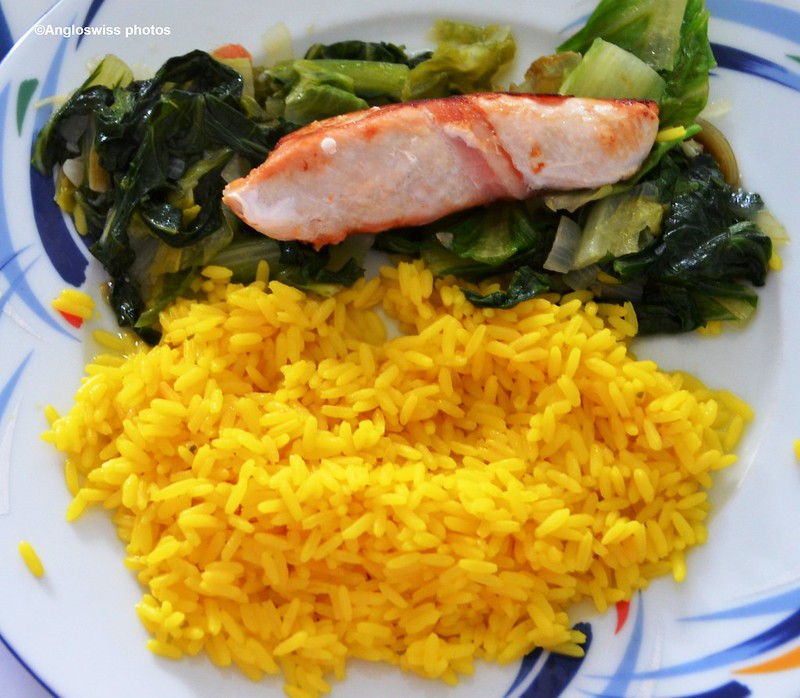 One of my 5 star menus: saffron rice with chicken breast on a bed of cooked lettuce. Just something I “knock up” for Saturday lunch usually.

Some people live to eat and others eat to live. When I was younger and the extra bulges and kilos did not seem to play a part in my sexy curved figure I would live to eat. I stuffed it all in me: sweet, sour, meaty, veggy, spicy – who cares. If the taste was right I would eat it. As the body lost its curves, everything sinking towards South, I had to have a rethink. Not that I was really bothered, but when I realised that even my feet were expanding, I decided something was wrong somewhere.

A further problem was that my digestive organs no longer behaved as they should. They even refused certain foods. Drinking my usual cup of coffee after lunch was not advisable. It had a negative effect on my recycling process, so I converted to tea. I, of course, examined all possibilities of changing my diet, but as I was responsible in feeding Mr. Swiss and Son No. 1 (Son No. 2 having moved out) I could not only cook what I liked. There was also a diabetic problem, but even that can be overcome with plain common sense. Other factors were also to be taken into consideration. Am I an omnivore? This question sent me to Google/Wikipedia as I did not know if I was or not, this word not being in my vocabulary. It seems I am. I eat vegetable, I eat meat, I eat almost everything. I have to know what it is, where it came from and how it was cooked; one of the reasons that being invited to a meal in a restaurant is not my sort of thing. You never know what the restaurant people do with it, until it arrives on the table.

I am not fussy about killing a salad or carrot, and eating meat is no problem. I can eat vegetarian, I can enjoy a steak and above all, I can be grateful that these foods are available in my country at a price that one can pay.  I think being fussy about food today is a little out of place. Ask someone in an African country with famine, they would be glad for our leftovers.

If you asked my late mum if I was a picky eater, she would definitely say “yes”, but mum could not cook and had no idea that there were other spices available except for salt and pepper. She was under the impression that cooking meant boiling water with the vegetable until the vitamin content had been completely destroyed, or roasting meat in the oven until it was dry enough to prove that it was cooked. Who am I to criticise, but she made it easy for me to be a picky eater. Her food was tasteless and to compensate the dryness of the meat she served it with a gravy made from a packet. Dad loved it, but I did not.

I have no food quirks really. What comes on the table is eaten and as I cook most of it, it is almost an occupational hazard. I do not like veg that is cooked until it is soft and mashy. I like it to have a bite. I like my steak to be medium, not bloodless, but not vampire style. I will not eat tripe or calamares, but this has nothing to do with the taste, or that it would “turn” my stomach. It has to do with the fact that I never really worked out how to eat it. It reminds me of eating rubber, you chew and chew and chew and still there is no breakthrough. It is transformed in swallow sized pieces, but has not real fulfilling taste.

Today we had mashed potato, veal ragout cooked with carrots, celeriac and leek and garnished with fried musrooms. I used white wine when cooking the ragout. I do not really like mashed potato. It does nothing for me, but Mr. Swiss does (in small doses) and it seems son No. 1 eats everything, except for mushrooms and green veg – he is autistic so has his small disagreements with certain food. One of the reasons why I fried the mushrooms separately, I garnished the meal with them for those that do not have an allergy to mushrooms on the plate. Although I do not like mashed potato, I made it all the same (from real potatoes, mashing it myself) Just because I do not like it, it is not a reason for not cooking something that the others like.

As far as exotic is concerned, if the price is right why not?.I used to serve salmon, but now only buy the tested kind or not at all. I am perhaps picky when I see the modern methods of mass farming. I suppose we are lucky in a way, we have a choice. One day perhaps the world will run out of food even in our areas and what do we do then? Perhaps the title of the promp will be “Mouths Shut” because we will not have very much to fill them with.

I hope you all enjoy you Sunday dinner despite my negative remarks. I just ate a piece of the Apple Tart Mr. Swiss baked yesterday with some whipped cream (the piece before last – I reserved the last piece for Mr. Swiss). I don’t feel guilty about it, my apple tree is full of apples.

Daily Prompt: Mouths Wide Shut – Huh? My name is Angloswiss and I am an omnivore