Who did you idolize as a teenager? Did you go crazy for the Beatles? Ga-ga over Duran Duran? In love with Justin Bieber? Did you think Elvis was the livin’ end? 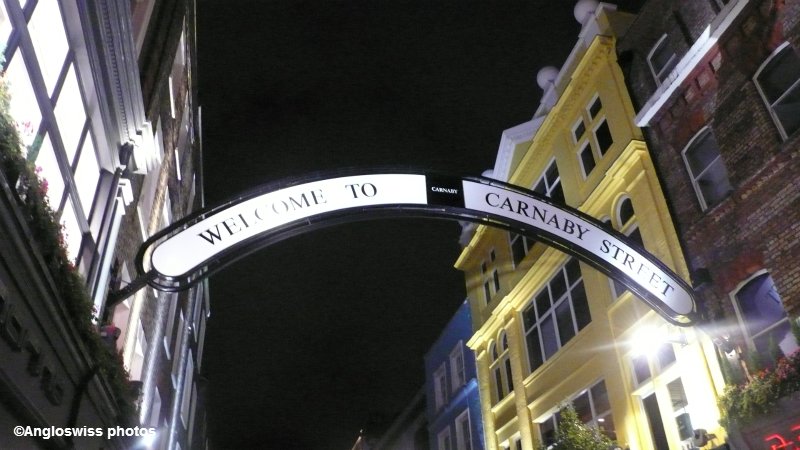 I was a teenager in London in the days of the Swinging Sixties. The Beatles, The Rolling Stones, Mary Quant, Vidal Sassoon and of course Carnaby Street: the centre of the fashion world at the time. I took the photo in 2009 on a visit to London, probably out of nostalgia, a memory from the past, but I remember it well. The Stones were then at the beginning of their career and played in a London club in Soho, the Marquee. I must admit I did not go there, never saw them play live but they were part of my background, as were the Beatles. The Beatles originated in Liverpool, so that was sort of being in another country.

As I had not yet met Mr. Swiss, he was not one of my idols. He is 8 years ahead of me and I somehow think if we had met on a London street, he would have walked past, and it would not have bothered me. At that time I had other things in my head, like passing my GCE exams at school and discovering how to hop onto a London bus with a tight mini skirt and stiletto heels and of course Saturday nights. Oh, sorry, that was a prompt a few days ago, but not from the past. Of course you spent Saturday evening in a large dance hall where there were two bands, having a look at the male talent available, or perhaps down at the pub. The pubs in the East End of London were packed, lots of smoke (at that time it was not so unhealthy, just an occupational hazard) and beer bottles on the floor. There was a pub known as The Blind Begger in Whitechapel where Ronnie Kray shot George Cornell, just a simple gang war thing. Mum was not so happy that I visited this pub now and again.

My hero of the day, was not a musician, not a singer, but ….. a journalist; Swinging Sixties and the characters that were a sign of the times. I was more enthralled by the excitement of the day and Kenneth Allsop was my hero. I was a teenager, and he was already almost 40 years old, appearing on a daily TV programme called “Tonight”. There were a team of journalists running the programme but I was somehow taken by this bloke; always neatly dressed in a striped shirt and tie with a button down collar, very fashionable.He was not God’s gift to the female dream, but he was OK. He had that certain something which I found attractive.  He interviewed them all, well-known politicians and his most famous interview was with the Beatles. He impressed John Lennon to write the song “I’m a Loser”

“The final piece in the puzzle was journalist Kenneth Allsop, who met John on March 23, 1964 and told him that he rather wished Lennon’s lyrics were as personal as his recently-published first book, In His Own Write, and not always about young romance. A hurt Lennon, determined to prove Allsop wrong, wrote “I’m A Loser” soon after. (The song does deal with a broken relationship on its surface level, however.)”

He was also a well-known jazz critic, swing, bebop, modern and had a weekly programme on the radio, of which I was a big fan. This must have paved the way for my meeting with Mr. Swiss, a preparation for the mutual jazz feelings. Although Mr. Swiss understands more than I do. I have even got to the stage where I know who Gato Barbieri is. You have never heard of him? Do not worry, he does not appear so much today.

Being basically a journalist, Kenneth Allsop also wrote a few books, perhaps the most well-known being “The Bootleggers”, facts about the prohibition time in Chicago.  I read this many years ago and I believe it is now out of print. He was also a naturalist, one of the first environment protectors perhaps, and also wrote a few novels in this connection.

It is only today that I know more about this Kenneth Allsop from a book “The Broadcast Life of Kenneth Allsop” by Mark Andresen which I have in my book collection. There was a tragic end to his life when he died at the age of 53 due to an overdose of drugs. It may have been suicide, not really proven, but he was not in good health at the time and suffered from pain. I was already away from England at the time, living in Switzerland with family, and my hero worshipping days had been replaced with scenes from real life.

There were others of course. I read many books about Garibaldi, a sort of freedom fighter of old Italy, wanting to reunite the country which was somewhat divided in the 20th century. He was an adventurer. I think the reason was because everywhere I went in England there were pubs called “The Garibaldi” so I decided to find out who this bloke was. I was always a victim of curiosity. Another hero was Fidel Castro – this is serious, before you have the idea that I was a fully-fledged member of the communist party and hoping to become a spy for my country. Che Guevara was in at the time, I mean he was a good looker, and Fidel was one of his mates. I decided to find out what was behind all this and read a few books about it. I am still not sure if Fidel was good for Cuba, but living on the other side of the world, he was OK. I know there are many Cubans that will not agree, but I am only talking about a teenage idol for me and not my life’s philosophy.

So there you see it. If my dad had been working for the British foreign office, perhaps MI6, I might have become a spy for Russia, accompanying Kim Philby, Burgess and Maclean on their escapes to mother Moscow. However, I was just a teenager in the East End of London hoping to leave one day and marry a Swiss. They were well known for having gold bars under the mattress – unfortunately there are always exceptions to the rule.

Teenage Idols of the Swinging Sixties