Do you find it easy to make new friends? Tell us how you’ve mastered the art of befriending a new person. 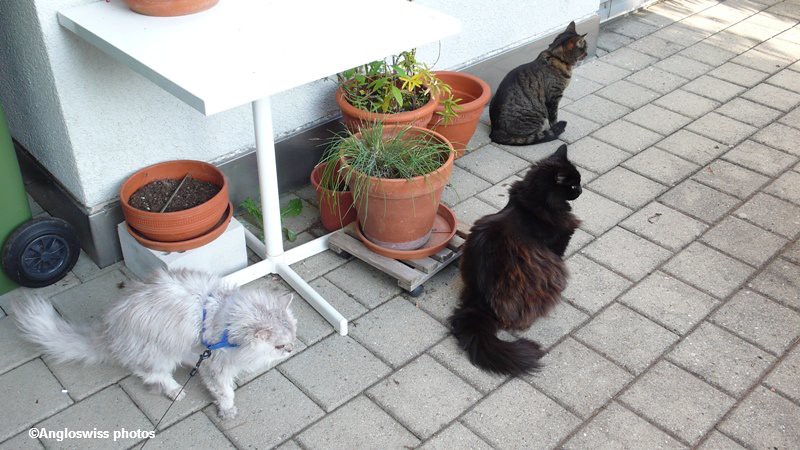 Felines are not the friendliest of animals, in fact not being friendly is one of their trademarks. They do not even face each other when sitting. It might be that a male feline wants to be friendly with a female feline. This can be problematic. Basically the female does not show any signs of “wanting to get to know you”. If the relationship does develop then generally the female swipes the male with a heavy paw on the nose afterwards to show that she still has things under control. The female then moves on to another male cat and the result might be a litter of lovely kittens each one resembling its father, but not resembling each other. The two felines on the right of the photo are sisters from the same litter. Admittedly the black long furred one, Nera, does resemble her mother and the tabby feline probably resembles the father. Who knows? Perhaps both resemble the fathers. On the other hand the white Selkirk Rex feline, known as Fluffy, resembles both his mother and father. It was a planned get together, mummy and daddy both being Selkirk Rex cats, so nothing was left to chance and they had no choice. Perhaps felines are sensible, no discussions, no pretence, they do what they want to do, and no feelings involved.

We humans have to complicate everything. We involve it all with feelings. Befriending someone is not something I would involve with “mastering the art”. Either you find someone sympathetic or you do not, so why does it have to be a strategic event. At my age I do not walk around wanting to make new friends, it just might happen. The true friends are perhaps the ones I still have from my childhood, teenage days, with whom I still have contact, but these friends are mainly in another country, England.

So, I do not make a study of making friends, I just let it happen. I was in England a couple of weeks ago and as my father has now moved, I had to take another bus route to visit him. I was staying at my friend’s house and travelling to and fro with the bus (now that is a friendship lasting already 56 years from our school days). Taking the bus was complicated as it was a different bus route to the one I was used to. I knew it, but at night everything looked different. I eventually arrived where I wanted to go, but not without problems. I am deviating again. I had a memmorable bus trip, the bus was crowded as usual but being a grey-haired golden oldie I could take my place in the seats reserved for the old and frail, at least that is what I did. London is a cosmopolitan town, all nationalities and on one of my journeys I entered a conversation with the lady sitting next to me. That was interesting. She was not a golden oldie and It was obvious that her origins were not so English. She told me she was from Nigeria but had been in London for many years, after at first spending a spell in Manchester. Our conversation developed, both of us learning something from each other. Not that we departed as bosom buddies, but such experiences remain.

My next bus conversation whilst in London was when I sat next to a lady, also not being originally English. Somehow we began to talk. This is not surprising for me, I seem to get involved in conversations most of the time, and some even say I talk a lot. Anyhow, this lady’s origins were in India. This was up my street, having spent my first two years living with a half Indian family in Zürich, Switzerland. I was well acquainted with the food, and many other things. This lady originated in the Punjab, one of the very much Anglo parts of India many years ago. We spoke of many things, political, culinary and I think if I had stayed in London, a genuine friendship might have developed. She asked me my name as I was ready to leave the bus and I asked hers. We will probably never meet again, but another one of life’s positive experiences.

Friendships just happen, they are not planned, some sort of invisible connective wire is in the air and it is a feeling you acquire.

Talking of bus journeys, part of the road for the No. 174 bus in London passes by a sort of bird sanctuary with a small lake, lots of green fields and generally a wonderful place for observing nature. I have known this area for many years. It is now known as the Chase, and at one time there was a public house (pub) there serving drinks for the thirsty wanderer. Today the pub has disappeared and replaced by a very nice house. this might be a hotel. Anyhow after I arrived back in London I read on Facebook, where I am a friend of the Barking Dagenham Post, the local newspaper, that an unsuspecting walker discovered a human leg in the lake. This leg must have been floating around whilst I was passing the area on the bus. The story went further. There was a bloke missing in the area for a couple of months, so the police went to work and found the other body parts. Three people are in arrest and my bus was sailing past this area at least once a day – now that is food for thought. Just by coincidence the bus passes the local cemetery a little way further down the road at a bus stop called Crow Lane – another suitable name for a place with a cemetery.

So if you want to be my friend, that is OK. We are all online people here, will probably never meet in person and what could maybe better. We do not have the complications in the relationship that might disturb our mutual understanding.

Daily Prompt: Why Can’t We Be Friends