Are you a night owl or are you the early bird? What’s your most productive time of day? When do you do your best work? 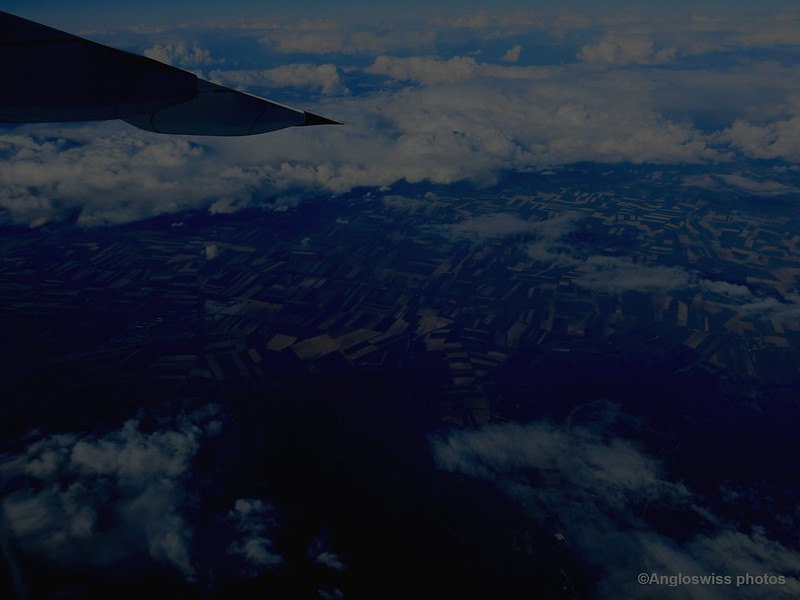 The view from a plane over the farm lands of France – actually it was daytime, but you can do everything with a little touch of photoshop today.

It all depends on me, my mood, my current occupation, my state of mind. What’s work?

There was a time when life required duties to be carried out and completed. A company would not wait for me to arise in the morning, I had no choice. Be there and do it were the orders of the day. This accompanied with family organisation, multi-tasking was required. Was I a night owl or early bird? I was that what life required of me. I am not going to boast about being an early morning creation. I love my bed, soaking up the confinement of the sheets, resting my weary head on a pillow and then it happens. Somewhere in a distant place a bell rings, a siren, an explosion. My brain cells begin to tick, habit forming takes over and I leave my bed for a place called work. This was in the far gone days before I became a golden oldie.

Whether I was productive at this time, I am not sure. There were times when my head began to nod at my desk, generally after lunch. Something was missing in my life, perhaps the two hours that had been stolen in the early morning hours by the sound of the alarm clock. Perhaps I should have retired to bed an hour earlier to remain fresh and awake during the daylight hours.

I should have been a vampire. They have such a quiet life, sleeping the daylight hours away in a coffin, a coma similar sleep, drifting amongst the memories of the ghouls and undead, never growing older. My teenage beauty and charm would have been preserved forever. Problems do not exist with an alarm clock, they depend on nature: the rising of the moon. Oh what a life, no need to sit in an office during the day and pass the time carrying out orders. One vampire problem is a fresh supply of blood. If you are lucky your midnight flight will take you near to a blood bank and then the problems are solved. The blood is clean and pure, all tested for some sort of human diseases which might occur. Vampires do not have an easy life today: unprotected game roaming the street in the dark hours of the night is subject to an unhealthy style of life. There might be addicts, alcohol or drugs and no self-respecting vampire wants to become high after a refreshing drink from a welcome neck. It would disturb the diurnal activity of sleep (diurnal=daylight – found it in Internet). A vampire with insomnia is an unhappy vampire. Sun rays might alight on the vampire suffering from insomnia during the day and that would be fatal. We all know the sad end of Dracula – he was stabbed in the heart, although had he suffered from a sleepless day the sun’s rays would have done their work, and his body would have become a pile of dust, swept away to the next dustbin.

However, I am not a vampire up to now. There are a few strange bats flying around in the area where I live, no reports of vampire bites or of undead walking in my garden.

There is a remark about productivity in the daily prompt title. Today I just produce a clean apartment, cooked food and a daily prompt. That is the story of my life. During the night I sleep, although there are times when a full moon appears and …….. Ask my felines, they sometimes accompany me.

Daily Prompt: Because the night is when you sleep or…..