Have you ever become obsessed with something? Tell us about something that captivates your attention like nothing else. 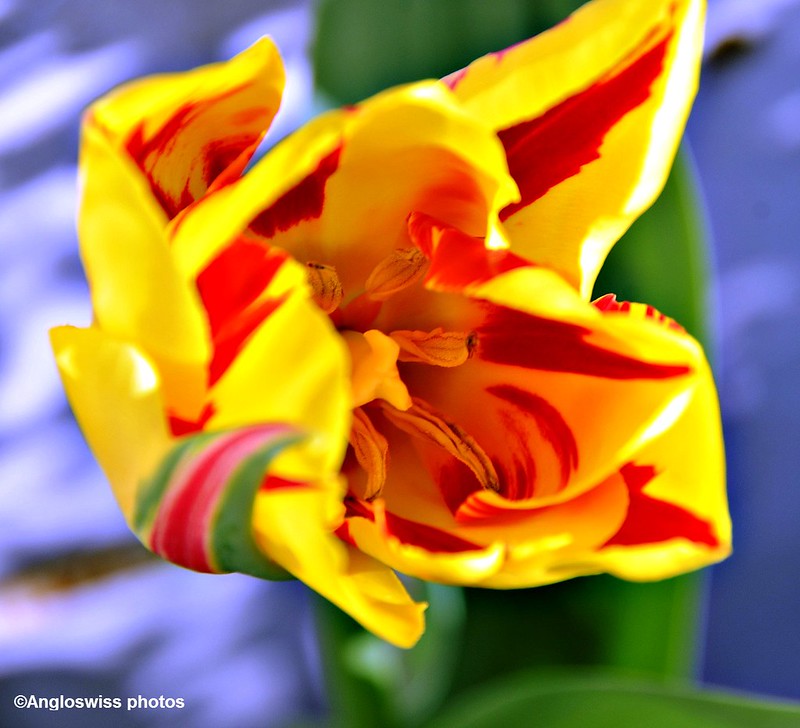 At the moment I am a little obsessed with my new fantastic tulips that I planted some time in autumn. I decided, being a golden oldie, it is time to cut back the back-breaking pains and aches of replanting a garden show annually. Perennials are the new theme for my garden. You plant them once and they appear regularly every year with no problems. No more digging on your knees, no more preparing flower beds, just a single planting session and nature takes care of the rest. To ensure that my flower show would be worthy of a position in the world’s Switzerland’s best, I chose a tulip that would emblazon a trail in the memory, leave a marker in the landscape – at least in my landscape.

I planted two sorts, in harmonizing colours and very tall: this is the tallest type in the photo, the smaller, but also big, are not yet ready to blossom in their full glory, but are well on their way.

Of course I am also captivated with Mr. Swiss who attracts my attention like nothing else, but as that goes without saying I will not bore you all with the facts. Let it be sufficient that we have put up with each other for the past 46 years and probably will continue to do so (unless, of course, Brad Pitt might ….. – no forget it).

So, being a person full of obsessions, I am not yet finished of course. I could tell you all how I am currently obsessed with the “great new look of the daily post”, but as my comment No. 3, which I posted yesterday, is still waiting for moderation, perhaps I have overstayed my welcome. I just happened to mention that I am still waiting for the great new form of posting Pingbacks and made a threat comment that I might give up with the daily prompt. This does not seem to have had an impact on the WordPress team. They are not shaking in their shoes or tearing their hair out in frustration, knowing that Mrs. Angloswiss might leave the group forever, so I am slowly giving up. I no longer receive my daily e-mail with the latest subject of the prompt. If you cannot beat them, join them, although it is becoming increasingly difficult to join when you cannot find them in this “great new look of the daily post”. Something has come to my obsessed brain’s attention. There are an average of 50-60 submissions on the daily prompt since the new design, there used to be at least 80-90, or am I wrong? Many familiar names are no longer there, but….. the Russians are still appearing regularly. Perhaps they might take over eventually – I will have to start learning the language again.

There is a danger that even Vladimir Putin might want to infiltrate Europe. There was an interesting article in the local Swiss Sunday Newspaper today (Solothurner Zeitung). There used to be a law in Switzerland, many moons ago, that every household should have emergency rations in case of a war, famine or other such catastrophes. Over the years this law was either forgotten or deemed unnecessary. I do not know, it was before my time in this land of banks, cheese and cows. Anyhow a politician, a military man (of course) said this should be re-inactivated. It seems with the threats from other countries, we might be under siege. So Swiss citizens are now emptying the shelves in the local supermarket. Supplies of oil, lentils, chocolate, coffee, tea and basic essentials for survival are being bought, although I am not really a fan of lentils. There are also ready boxes of immediate Swiss Cheese fondue that can be bought, which would be more patriotic and more to my taste.

Yes we Swiss are ready, when Mr. Putin and his army arrives at the Swiss borders we will beat them, being a country of strapping William Tell lookalikes armed with our crossbows and Swiss Fondue protecting the borders. We do have a Swiss army, but the regulars only serve three weeks per year until they have fulfilled their quota, so it will depend who is serving. Room at the barracks might be limited. At least we will have no problem with attack by sea. We have no sea, no ocean, just a few lakes and they are reserved for our tourists. I am not sure about the Swiss Navy, I think we have one ship sailing around the ocean, probably registered in Liberia.

Of course the Swiss Airforce is not to be ignored, although at the moment we have just bought a few new planes from the Swedish which are still being tried out. I am not sure how far this project is, but there was a flight of one or two being watched by a crowd of Swiss armed with their cameras. Otherwise this model, known as Gripen, Swedish,  is still mainly on the drawing board. I found this link on Internet Vote for your New Airforce Plane and it seems the democratic Swiss will be voting on this issue on 18th May. We had better hurry up, Mr. Putin is ready to pick up his fortune on his Swiss numbered bank account.

On these wise words I will now leave you to ponder about my tulips, the great new look of the daily post and the Swiss Vote on 18th May for their new aircraft (not forgetting Mr. Swiss who is now on a comfortable chair in the sun, with his iPoddy thing in the ears listening to the latest jazz and reading his iPad – we are very “I” everything at home). My iCat is just preparing for an afternoon sleep on the chair opposite.

Daily Prompt: Can’t Get It Out Of My Head

Pingbacks may follow tomorrow morning Swiss Time, if I find them, if I have the time to work it out, and if they still exist in this great new look of the daily post.