Ever have an experience that felt surreal, as though you’d been suddenly transported into the twilight zone, where time seemed to warp, perhaps slowing down or speeding up? Tell us all about it. If you haven’t had an experience in real life that you can draw from, write a fictional account of a surreal experience. 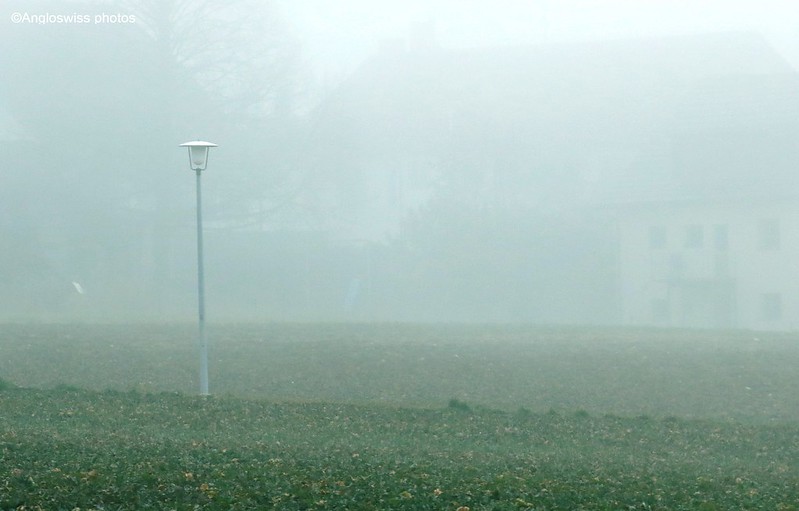 I take the camera everywhere. You never know if one day you will have the opportunity of taking THE Photograph. The one that will make you famous, the one that will be be put on the front page of a magazine called “Photographer”. So, OK, I dream on until that day when it happens.

I was actually in the moving car and was snapping away, Mr. Swiss was driving. It was a misty day and what the lens captured was more luck than judgement. I arrived home and downloaded the results on the computer. It was then that a photo appeared with a lamp post. I know lamp posts are not the thing to stay in the viewer’s memory, not exactly Pulitzer prize worthy, but it might be the success of the year, what the Pulitzer people were searching for: a Swiss lamp post in a Swiss field taken with a moving camera.

“Where did you take that photo?” asked my other half.

“On the way home from the shopping trip, just near the monastery.” Our town has a  cathedral, and a few monks that live in the monastery.

“But what is that house?”

“What house? There is no house near  the monastery, It is just field of green grass.”

And sure enough I saw the faint outlines of a farmhouse. I also did not remember seeing a farm near the monastery. The monks were quite self-sufficient. They had a few cows, some chickens and even planted all sorts of herbs and vegetables, so it certainly was not part of the monastery. I decided to have a closer look. Later that day I took a walk to where the photo originated. The mist had cleared although everything seemed to be covered by a sickly yellow light. The lamppost was now, well just a lamppost. Nothing special and in the background was …. nothing: just an empty space, a large field.

It was then I met a monk walking towards me on the path. He seemed quite ancient, and his walk was slow and careful. He looked at me with his rheumy eyes peeping out of a patchwork skin, flecked with brown stains , and I wondered if he was actually able to let me have some information, although quite frankly he would have played an ideal role in “The Walking Dead”. He greeted with a quavering shaky voice and I answered with a “hello”. He stopped and looked at through me.

“You are searching?” he said

“I know all, you want to know where the farmhouse is.”

“There is no longer a farmhouse here. It burnt down to its four walls many years ago. The devil takes his own eventually.”

“There were demons at work. The farmer knew this and he we  warned him, but history repeats itself. His rooster would not crow and his barn was infested with bats. Ask not, just accept. ”

“But I have a photo of the farmhouse on my computer: a white building with a large attached barn.”

The monk gazed in the direction where the farmhouse would have been.

“This photo was taken at midday today?”

“Fifty years ago, to this day, the farm was food for the flames. Its existence is nevermore. The farm had to go forever.”

But the monk was no longer there, the mist had appeared again and there was nothing to see, perhaps just the faint outlines of a farmhouse. I think I read too many horror books, now where did I read the word “nevermore” – a poem by Edgar Allen Poe about a raven?

Of course, when I arrived home I took another look at the photo. What photo? Even my computer decided it did not want to be possessed. All the photos from my morning shooting session were there, but there was no photo showing a lamppost with a farm in the background.

Pingbacks in the Twilight