Have you ever named an inanimate object? (Your car? Your laptop? The volleyball that kept you company while you were stranded in the ocean?) Share the story of at least one object with which you’re on a first-name basis. 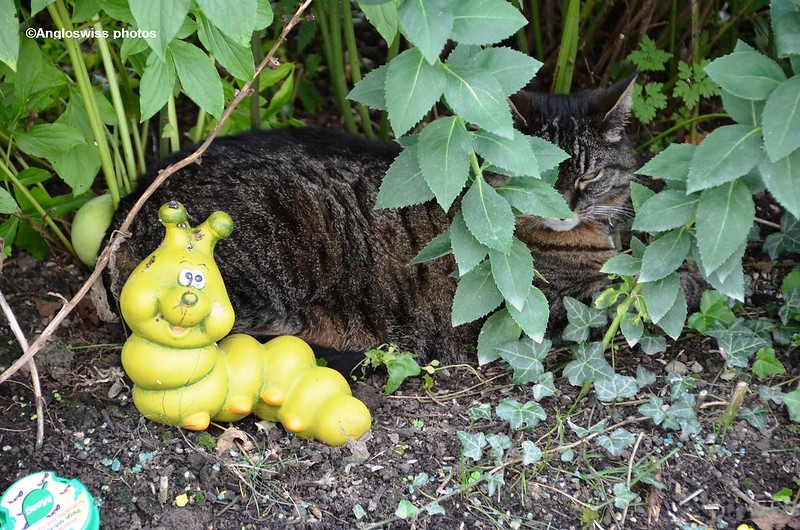 “Good morning caterpillar.”. No answer, he just kept smiling, a permanent grin. Even Tabby found he was boring.

I also greeted my computer this morning. “Hi cybi (nickname for cyber), where shall we go today?” The computer flickered a few lights, made a soft noise as if the wind was blowing through the bytes and my favourite sites were there. My computer gave no answer, so I decided what am I doing talking to an inanimate object that has no feelings? It is disconnected when I am not using it, and if it was a living thing, then I would have killed it, and I am not a murderer. There are times when I give my computer colourful names. The expressions are known as profanities and it is usually when it makes a mistake and a file is lost, or it is slow in reacting to my commands. On the other hand there is a saying a bad workman always blames his tools, but I am sure that Bill Gates made no mistakes.

When I was a little girl I was constantly given dolls for birthdays and Christmas. I was not the doll type. They are boring and so they were left in a corner, ignored and nameless. Of course there was the doll that said “mama”, but not very long, because I wanted to know where the noise was coming from. Her voice was removed; she was silent and eventually was placed in the corner with the others. I was also convinced I was not her mama. This doll was definitely possessed. There was a blue teddy bear. He was not even given the name of “Bluey” or “Ted”. Bears are not blue, it was totally unrealistic and so his fate was sealed: another corpse for the doll cemetery.

I had a Mr. Potato man once. It was all the fashion at the time. It arrived in a box with plastic body parts like arms and legs, and there were facial features in plastic: three different types of ears, some eyes in various colours, and a couple of noses and a mouth. You mounted an ordinary potato on the main frame of the body and decorated the potato with the eyes, a nose, a mouth and ears to form a face. Some might have given him a name, for me he was just a potato with plastic body parts. It was quite fun and all the rage at the time. After a while he was neglected, forgotten and all that remained was a strange smell coming from the box. Mr. Potato man had either shrivelled, or began to decompose and mum found I was not yet responsible enough to adopt a potato when she threw him in the garbage.

Naming a car was superfluous. It already had a name embossed on the chassis or a plaque. The first car was called Fiat 127 (he even had a number), then there was Fiat Panda, followed by Fiat Uno and the last in the line was Fiat Punto. I did not christen them; it had already been done before I bought them. Perhaps I missed something and should have given them real masculine names like Mario, Carlo, Maxilmilliano, Alberto etc. all in the Italian style. It seems my cars were born manufactured in Italy.

Then the Swedish gang arrived. Their first name was also Volvo followed by various numbers. Apparently the numbers were the key to the strength of the individual Volvo according to Mr. Swiss. It sounded so Swedish, I decided if I gave them other names they would feel like displaced persons cars, searching for an identity, so I left it with Volvo, although I discovered that Volvo is latin for “I roll. Our Volvos did roll. Our Volvos are no longer with us, they did not die a human death, feeling neglected without a name like Gustav or Kurt, they were exchanged at the garage.

If I name anything it must be something realistic. I often name insects in the garden, although basically only spiders. Spiders usually come alone, hovering in a web and forming packed meals out of those insects that fly into the nest. All my spiders are called Fred. As I rarely have more than one spider to observe, one name is sufficient. All the other insects are either too numerous to deserve a name (ants and firebugs) or die as soon as I think about naming them, such as flies. Flies have a short life and even shorter if I am successful with the fly swatter. Slugs do not live long enough in my garden to warrant a christening service. They either melt after a salt shower or go on a Kamikaze flight over the garden hedge.

Why do we all have to have a volleyball? Sounds like something from a film. I never played volleyball, was more the jigsaw puzzle type, but there were too many pieces to name.

Daily Prompt: The Names’s The Thing – I have a bad memory for names

11 thoughts on “Daily Prompt: The Name’s The Thing – I have a bad memory for names”