When was the last time a movie, a book, or a television show left you cold despite all your friends (and/or all the critics) raving about it? What was it that made you go against the critical consensus? 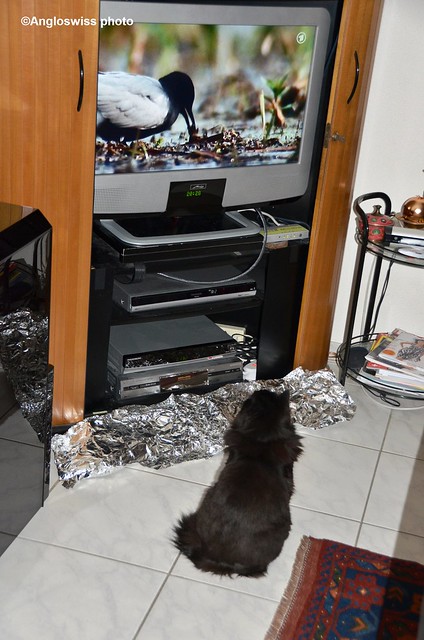 Even our departed feline, RIP Nera, liked to watch the TV. She was not bothered about happy endings, as long as the story line and pictures fitted her sharp senses. Watching a duck made her mouth water, and if it was a tennis match, she would follow the ball carefully from left to right and now and again make a leap to catch it.

We are fussy, we like it to fit the mood and the likes and dislikes. The last time a TV show left me cold was probably yesterday, the day before yesterday and two days ago etc. etc. You see what I mean, I have given up with TV. In the good old days when it was still in the learning phases it was a method of relaxation until it sent me off to sleep. I was a mum, multi-tasking and sinking into the armchair in the evening to see what TV had to offer. I was not fussy and was soon sleeping whilst the wildest programmes were running in the background.

The present day situation has not changed very much the difference being that I am now wide awake, being a golden oldie and only doing what I want to do, and choose television as entertainment. Over the past few years I have discovered it no longer entertains and that the ideas are slowly disappearing. The suspense of a police drama, a murder, a spy thriller have dwindled into a sameness. The names are different, the actors are different, perhaps the victim is shot instead of poisoned, but it is all dying a mysterious death and the colour of blood remains the same. Even the vampires all look alike. Admittedly the have grown a little more horrific, they might have a chunk of arm between their teeth,  the possibilities of film have improved. There was a certain charm watching the crew members of Starship Enterprise in the past stumbling around a mysterious planetary landscape, mainly constructed from painted cardboard and meeting extra-terrestrials with plastic ears and masks. It was a fascinating world of make believe and it was fun to watch. Today the actors stand in an empty studio, move according to the director’s orders and all around them there is a sort of X-box surrounding. When they deliver a punch to a watery substance in the klingonic form, they are punching the air. It is all computer generated effects.

I was thinking about watching the new film of Noah, the guy who built the ark with the animals, but it has been subjected to a lot of critic. The story had been changed (does anyone remember what really happened at the time?) and it seems that there are even a couple of animals that were a figment of the director’s imagination. I believe there was a discussion with Pope Francis, although I do not think he was actually there when the ark sailed. Who cares, I might even enjoy that film. Bruce Willis has made the impossible the possible with his reckless escapes from the clutches of the bad and the ugly, but to an extent that it becomes boring.

To sum this up, I no longer really watch television or films. They no longer make them like Casablanca with Humphrey Bogart and Claude Rains. They were the good old days where you knew what was going on and did not have to ask your colleague “What did he say” (not understanding the garbled slang and words).

I am a reader of books, good or bad, but I have my opinions. I write myself, am too lazy to write a book. I like to see the newest editions, read the critics and based on this I download my choice. I get quite a few good free offers from Amazon or at reduced prices and as I usually read a book just once, that suits me. An Author has to think up the plot, create the characters, describe them that they exist for us and that is not easy. There are bad writers and good writers, but they still have to work for a result and spend time on creating a novel. I do not put them in good or bad boxes,but more good and less good. I have read so many books, some have disappointed and others not. The not-so-good books are usually those on cheap or free offer from Amazon from unknown authors, but even those books had to be written. All the more when a book is really classified as a best seller, one of the best and you read it (perhaps not such a cheap price) and are disappointed. This happened to me a couple of months ago when I downloaded The Goldfinch by Donna Tartt on my Kindle. I was prepared for a good read and it was for about two-thirds of the book. The last third was a weakening of the plot and the end was OK, but just OK. I love happy ends. I know everything cannot end happily, but to just let it dwindle to a nothing was not my idea of a successful ending to a story. Everyone to their own taste, but this was not mine. At the moment I am reading Fall of Giants by Ken Follett. I like his books and above all I could download it free on my Kindle. This is a real bargain as it is a monumental book. I know I will not be disappointed and am now 75% through.

One thing I am sure about. When I eventually write my epic novel full of excitement, great descriptions and a super story, I am sure you will not be disappointed. The problem is I hardly ever have time to write it, I am too busy doing this Daily Prompt.

Daily Prompt: Matters of Taste – As long as it’s my taste

14 thoughts on “Daily Prompt: Matters of Taste – As long as it’s my taste”