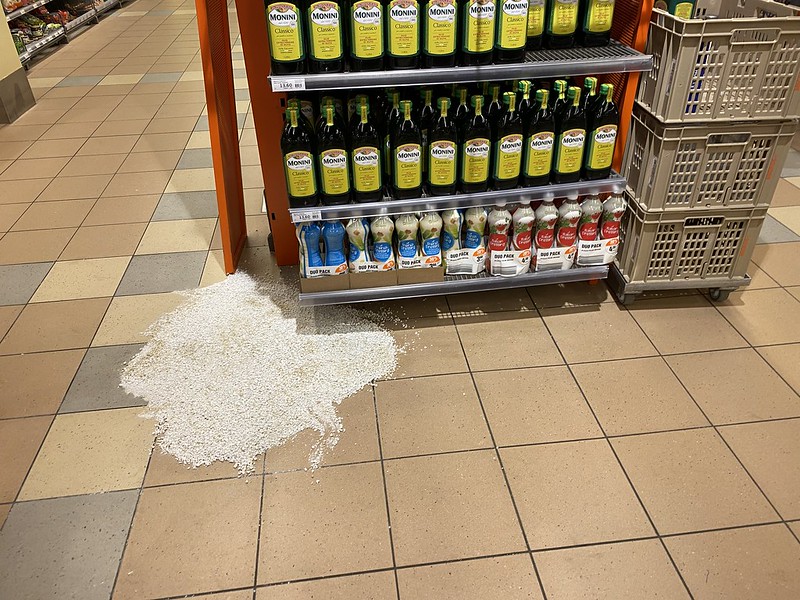 I missed all the fun. When I arrive in the store this afternoon the mess had already settled on the floor. I think someone had smashed a bottle of oil and they had spread small absorbing stones over it to make it safe for everyone.

And I am now at home and settling down for a nice quiet week-end.

“Come on boys and girls, no spitting, on your best behaviour. We will steal the Christmas show from the donkeys now. They have had enough opportunity to be in the spotlight. And who said that guy rode on a donkey, it could just as well have been a llama.”

“There weren’t any llamas where that guy lived: too flat and hot. We llamas prefer it a little cooler in the fresh air of the slopes.”

“So what are we doing in the middle of town in a market Pablo?”

“Obvious Diego, the food is good, fresh hay every day and a trip up the mountain now and again.”

“Ok Pablo, so now get up and stop laying around on the floor. Be a genuine llama. No Pablo, no spitting absolutely no spitting. Donkeys so not spit. Ok just spit at each other, but not at the humans. No-one rides on a spitting llama.

“OK Diego, but I am settling down here. I don’t like those little humans that keep pulling my tail and telling me to he-haw.”