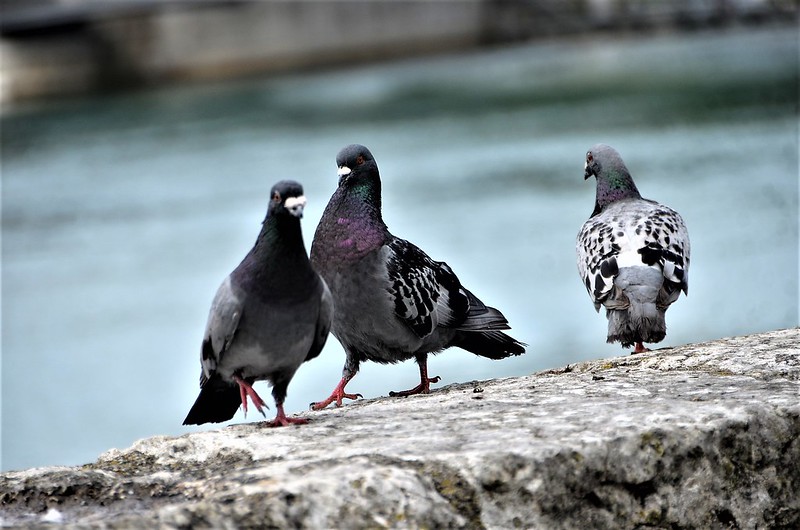 “What’s the matter with him?”

“The usual. Since he got that chequered look on the feathers, he thinks he is something special. He even hangs out with the crows.”

“Really, they put up with it?”

“They don’t. He was even sharing his bread pieces with the sparrows this morning.”

“Disgusting, how can a pigeon be so sequacious.”

“Must be in the breeding. I heard his father was a  dove.”

“She thought she was something special having a dove as a boyfriend. When the egg hatched she had a right shock. She was expecting something white and shiny, and instead she got a chessboard.”

“And now he doesn’t want anything to do with us, typical.”

“Wait a minute, hold your peeps he is looking at us.”

“Listen pigeons, do me a favour. If you lose any of those rainbow feathers on you chest, can you give me a few.”

“You must be joking. There you are strutting around showing of the black and white square look and now you want to add some of our rainbow feathers.”

“You don’t have to be so ubiquitous about it: typical common town pigeon. I am off and when I return you will be jealous of my new look.”

“To the chickens of course. I had a deal with the rooster for some hamburger bits and pieces I got from the MacDonalds on the corner. The chickens love them and in return the rooster is giving me some tail feathers. Then you will all be jealous when I sit on the roof.”

“Us jealous, never. It might sound a bit strange when you start crowing instead of cooing.”