Recharging has become a way of life. I think this was my very first mobile phone and that had to be regularly recharged. Today the phones just seem to do it themselves. I have three points in my apartment with leads ready to be attached to my telephone, according to where I am. I usually listen to radio on my iphone.

This morning I had an urge to visit the bathroom, as usual when I awake and at the same time my alarm sounded. That was too much, so after the bathroom visit I went back to hugging the duvet for a while, with my iPad for company. It keeps me up to date on the world. 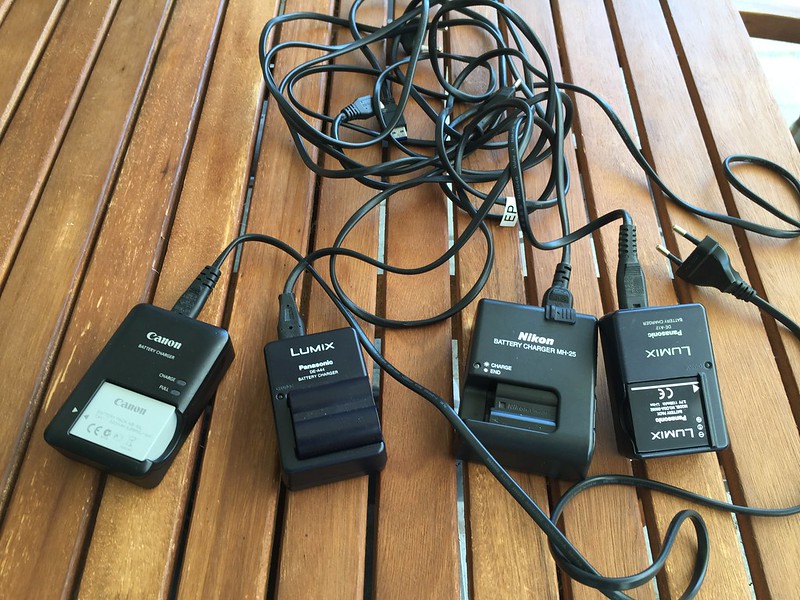 You would think in super modern times as ours, that somehow certain electronic manufacturers would put their heads together and organise a common denominator for recharging cameras for example. I have had a few cameras since digital took over. This is only my selection. I did not bother Mr. Swiss to let me have his selection for a photo. It would have annoyed him, he would have asked questions such as “Why”, “What are you going to do with them” and “Not now, I have other more important things to do”. I could have told Mr. Swiss I need them to complete my group photo of camera recharging appliances to emphasise a blogging point, but he probably would have shaken his head and told me to forget it. In this case you have my four various rechargers. I bought a new camera this week, another Nikon. Did it have the same charger as the Nikon in the photo? Of course not, why simplify matters when they can be complicated.

My camera batteries are always fully charged, for the simple reason that I have two for each camera. One is in the camera and the other on standby. My new camera has a new system. The recharger is a plain and simple plug device. The battery is inserted and the device plugged into the socket. No more cables, it is all cableless. Admittedly I needed a few minutes more until I actually discovered how it all worked. Of course Nikon tell me that their newest camera recharger lives longer in the camera – who knows? I did notice that since I am using my macro lens, I need more power than normal, although that would be my previous Nikon model and I have two batteries.

Life can get very complicated with just a camera.

There is also something similar in a computer. Apple computers are no big problem. I rarely need a power supply when I use it because the batteries are charged for at least 8-10 hours before I have to reload them. My Windows machine is a different kettle of computer. If I forget to hang it onto a constant supply of electricity, it tells me after 1-2 hours, I am hungry, give me power otherwise I will die. The telephone is better behaved. If I happen to wake in the early morning hours, it gets its breakfast supply. It is on the bedside table, and all I have to do is to reach out, fumble around on the floor until I find the end of the lead and plug it into the telephone socket. This is all done in complete darkness, but I always seem to find the connection: practice makes perfect. My iPhone then recharges itself up to 100% silently next to my bed. When I am ready to rise and shine, it has its daily 100% dosage. The iPad has other requirements. It needs more, but it has to wait until the telephone is charged. This is no problem, as I do not need it urgently. Whilst I am having my daily shower/wash it is hanging onto power. At the same time the LBC (Leading Britains Conversation Radio) is in action to catch up in events in my old home town. My iPad recharges and also transmits – the wonders of modern comuter technology.

So where does it leave us, the human elements? All sorts of improvements are being made. I saw on the TV that a plastic foil is being developed to place on your arm and you can operate all sorts of various daily helps. It will tell you the time, the weather, probably your blood pressure, pulse and temperature if necessary. It might even be incorporated with the radio station and the ipod or whatever. But what about us, the golden oldies, those that need resuscitation after the night. Where is the device we can touch and all our body functions will be rejuvinated  as it used to be before we got things called arthritis, rheumatism, giddiness and movement problems. Even doing the housework is strenuous. If you have approximately 10 different ways of recharging your camera, why can you not have just one simple way of recharging the human body? I am not asking too much, just a model for the over 60 year olds would be enough as a start.