I really cannot remember the last time when I promised anything. My time is running out and what is the point. I might not even be here to keep the promises I might make, and I forget most of them in any case. I lost the belief in promises a few years ago, just turn my back on them. I have been disappointed too much in life.

You cannot believe politicians because they only promise when they want to win votes. When they have got the votes they forget their promises. 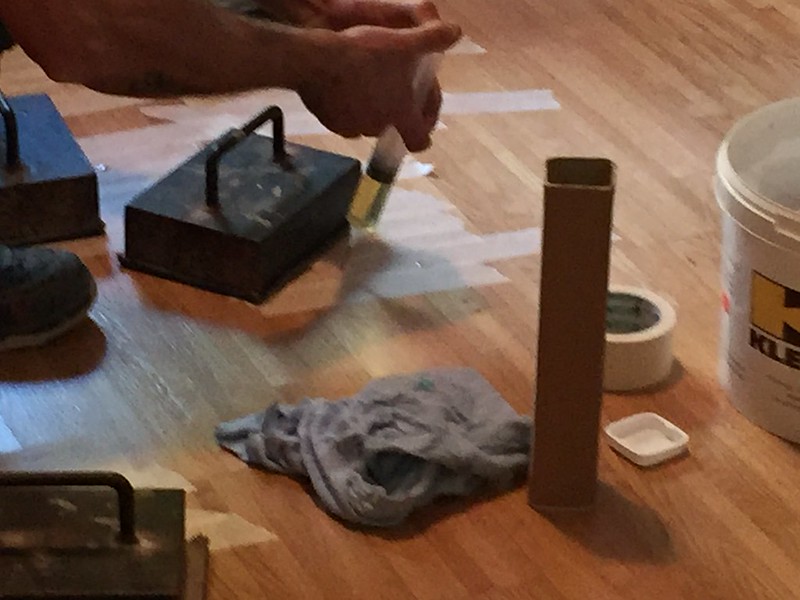 Our wooden floor was making a noise when we walked over it in one place. This meant that the wood was no longer airtight and had begun to float on the surface. If you do not get this sort of thing repaired, you eventually have to replace the complete wooden floor which can become quite an expensive job. One  bloke had a look and gave us a price where it seemed he was going to replace the floor with gold coated wood. This was one promise that we were not interested in and he seems to have forgotten it in any case.  Now we have another bloke who said all it needs was an injection of glue, leave it to dry, and that will do the job. The floor is 18 years old and as we are two olden oldies it makes no difference as long as it holds for the next 18 years, afterwards who cares.

As this bloke  was working in the house in another appartment he came along this afternoon and did the job. He bored a few small holes in the wood and with a sort of hyperdermic syringe filled with glue and did a few injections into the wood. Half an hour later he was finished leaving us with a few weights on the wood to keep it flat as the glue was drying. Tomorrow he will return and smooth over the wooden surface and finish the job.

What else am I suppose to say about promises? I don’t do promises because I would probably forget what I promised in any case, and basically the only profession that really uses promises is so-called politics. Promises are made to be broken and politicians are the experts.

Mr. Swiss has just promised to make one of this famous Swiss apple flans, so I have now moved out of the kitchen to let him get on with it. The room with the floor repairs is my usual computer room in the afternoon, but now I have to avoid the floor until tomorrow so I moved into the kitchen. Now Mr. Swiss has taken over the kitchen with his apple flan preparations, so I am now in the living room. Those laptops are wonderful. You can move anywhere with them.  I hope that the living room remains free, otherwise I will have to go to the bathroom, although I am sure I could make myself comfortable there in a quiet corner, there is always a seat.

Anyhow I promise to return again tomorrow, although do not bet on it. Promises are there to be broken. I think Mr. Swiss promised me something about 47 years ago and I promised him the same, but I cannot remember what it was. I cannot ask him at the moment, he is busy making an apple flan. He is now dealing with the logistics of the oven and temperatures combined with time – this is all a work of precision.