I spent my 50th birthday surrounded by memories of Paolo Conte and I even found my memories in a cupboard which I really thought I no longer had. I will be 70 years old next December and we are now talking about 1996, my 50th birthday. They grey streaks were already there in my hair, but I was still a working woman as the Swiss state considered I was still able to fight the good fight daily in the office.

Now to Paolo Conte. He was actually an Italian lawyer, but would compose songs and play the piano. It was probably a side line at the beginning, but he soon made his name, I discovered him and eventually had a Paolo Conte record collection of his songs. I loved listening to this guy. Now and again he would mix a little bit of english into the words, although he spoke pigeon english and I spoke pigeon Italian, so I knew what he was singing about. To give you an idea you can listening to the video, or not – your choice.

One day my friend in the office asked me about Paolo Conte and said she would like to listen to one of his records, whether I could lend her one. Of course and I gave her a selecion which she seemed to be quite happy about. 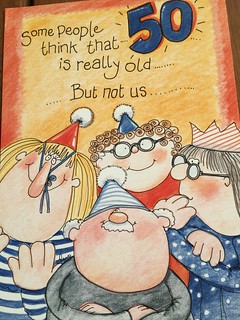 Some weeks later I reached my 50th birthday. I was congratulated, given cards and we probably drank something on the occasion and food was supplied. It was office custom, I was working at the time with a great bunch of people and there were no problems. It was a time when the economic situation was OK, there was plenty of work for everyone, and there were no big ideas about streamlining the work, taking away the pleasure and spoiling the fun. 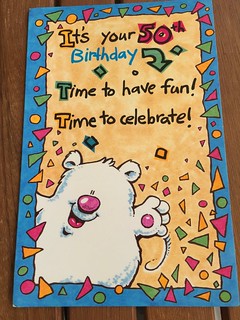 I got a few birthday cards from various companies who were our agents and naturally from my company. I even found the cards at home, lingering in a place waiting to be re-discovered after 20 years.You are only 50 years old once in your lifetime so make the most of it and treasure the memories.

Today I am glad I saved these memories. The cards bore signatures and some of the people I still meet today, although we have all moved on. Some are retired and have become golden oldies like myself. Others are still working but in other places. It was a good time and I often look back with good feelings. Some of those working in other countries for our agents I meet in Facebook.

And now back to Paolo Conte. I was actually surprised that my girlfriend in the office had discovered the advantages of Paolo Conte and pleased. that she wanted to listen to his music. It was then that a strange envelope appeared on my desk, a couple of weeks before my birthday. It  was a very original card with a copy of the record cover I had given to my friend to listen to on the outside and inside there were greetings from my office colleagues with an envelope. Inside the envelope were two tickets for a Paolo Conte concert. He would be playing in Bern, in the concert hall, and the tickets were for me and Mr. Swiss to go and see him. The concert was already on 27th November hence the early delivery of the card.

My boss is originally Italian and I also knew his family quite well. Of course he knew Paolo Conte, especially as his mother was also a keen fan. Must be something with us women and Paolo Conte! He had also organised two tickets for his mother and himself as well. and so on that memorable evening we made our way on the 40 kilometer journey by motorway to Bern. Of course it was one of the early snowfalls of the Winter season and as we drove further the snow fell thicker and thicker until we arrived in Bern and parked our cars in the Station Parkhouse. Driving through bern is not advisable in the evening, especially with snow. We caught a tram and arrived at the concert hall.

It was a fantastic concert. Paolo gave his best, he had a good backing group. My boss and Mr. Swiss enjoyed the music, my boss’s mother and I absorbed the music, it was an evening never to be forgotton. We made our way home. The snow was now coming thicker and the motorway was covered in snow. Mr. Swiss does not like driving in Winter conditions at the best of times, and neither do I. My boss had no big problem with his car, although snow is not exactly his favourite and his mother remarked “that it had to snow when Paolo Conte gave a concert in Switzerland”. It is when it begins to get colder and freezes and putting your foot on the brake no longer works that it can get precarious. I think Mr. Swiss still talks today about the evening we went to Bern to see Paolo Conte – not because of the music, but more the weather.

We survived, and it was really something I have never forgotten. And of course here is the card, together with the used tickets which I also kept in remberence of an unforgettable evening with Paolo Conte. 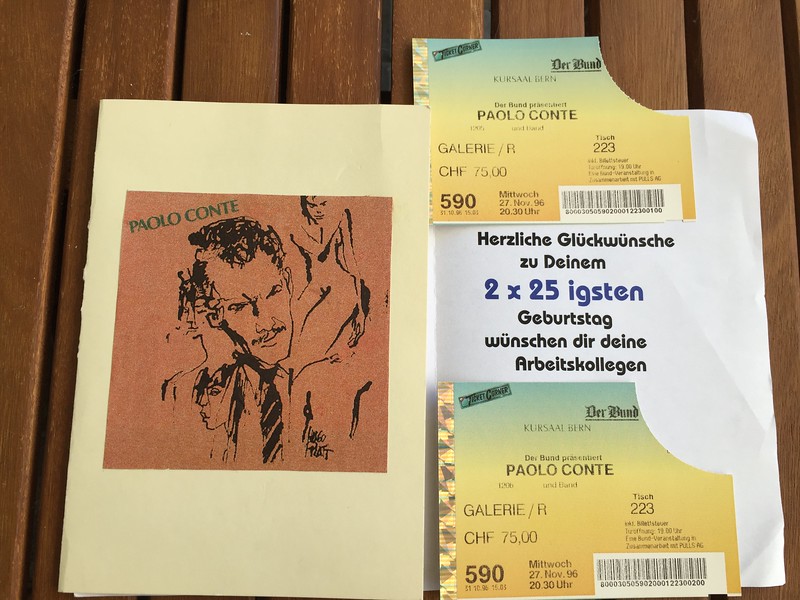 I just checked. Paolo Conte is still going strong and is 79 years old.