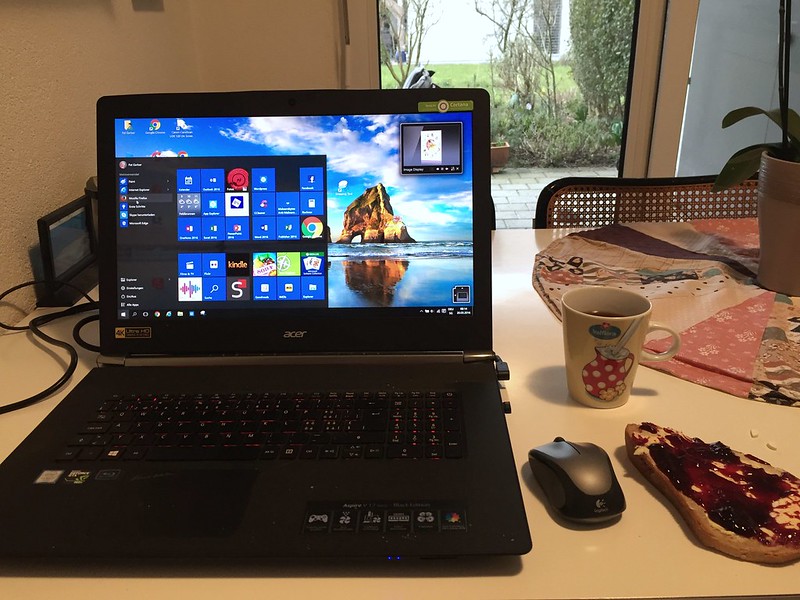 On the 20th March 2016 the morning looked no different to another morning, except the outside view reflected the beginning of Spring. It must have been a dismal morning, as the light was switched on in the kitchen. So what do we see? Yes, it is a frugal breakfast. Just a slice of bread and jam and a cup of tea, without sugar or milk, stirred to make sure the flavour of the tea bag explodes in the cup. If you look carefully you can even see the tablet that I was then taking on the table next to the bread. The computer is waiting for the first work of the day and I had just warmed it up. I also have an Apple computer, but that is generally reserved for the afternoon and quick starts in between, if necessary.

Morning is not a special event at my home. Just warming up for the daily chores and checking what happened during the night  in my online world. 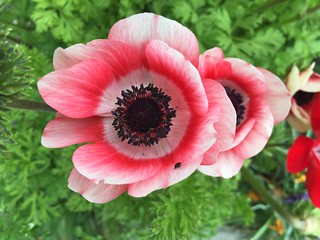 And another Spring morning dawns on Feldbrunnen in the Kanton of Solothurn in Switzerland.

The sun is shining and I can hear the merry sound of the neighbour as he pours water onto his new lawn. I should be doing the same today. I think the last time it rained was at least a week ago, although it seems tomorrow there will be a shower. I noticed that my lawn is showing some yellow patches, although Mr. Swiss assured me they have been there for some time.

As you can see from the photo, my anemones are flowering in competition with each other. I created a new flower bed last Autumn, clearing away the Vinca, the little blue flower covering plants, which had decided to slowly take over the complete garden. I planted various spring bulbs and decided on anemones. I was surprised when the first leaves began to appear already in December. It was a mild Winter, but I was worried that they would die of frostbite before they had a chance to survive. Luckily it was a milder Winter than usual and the anemones maintained their leaf status. As soon as the warmer weather arrived the first buds appeared and now they are all flowering.

Today is bathroom cleaning morning, so I will be busy. I think of all rooms to clean, it is the most annoying. Too many tiles to wipe over, but why cry about spilt milk, I really only need 45 minutes. I like to time my cleaning programme, as I then know it eventually comes to an end.

And now to wipe the jam from my keyboard and table. I used to eat breakfast cereal, with the disadvantage that my computer keyboard had the milk stain effects and it resembled a Picasso creation. Since I eat bread and jam for breakfast, my fingers tend to stick to the keys and my mouse has a sticky base, although nothing that a damp cloth can remove.

These are the words of the day, keep safe, and remember even a computer wants to look clean and shiny, otherwise it feels neglected.

Yes well my first thought every morning, not just this morning is “What’s the time?” It seems that golden oldies do not need as much sleep as the rest – so I read once. I am very good at sleeping actually, but not very good at waking up, especially if I awake too early. Thus in the mornings my first thought is usually how much sleep did I get. Today I found I awoke at five in the morning, meaning almost six hours, which is not bad. By the way I did not write my first thought down anywhere, at that time in the morning my co-ordinative movments do no co-ordinate for a writing session. However my brain decided to tick a little further, hoping that I would fall asleep again, and I realised that today was the day for the fresh sheets and duvet covers (which Mr. Swiss usually does with a little help from me). Also it was the day when I clean the kitchen. No big deal as my kitchen is cleaned regularly and the big job is usually done every Thursday morning, meaning that the big job is not so big any more.

There was a little plus today. Mr. Swiss and I were having one of those “let’s live as if you move every week” days, so we were organising. I discovered a chest of drawers in the cellar full of junk, so with some friendly persuasion from me to Mr. Swiss, he actually cleared it all out yesterday and this morning was the morning when we were organising and filling it up again  – fun. So I had more thoughts this morning before arising. Did I fall asleep again? I think so because the next noise I heard was my son going to work, and he leaves at about 6.50 every morning for work.

I turned over and continued my happy thoughts that I do not have to go to work any more and the next time I looked at the clock it was 7.45, I decided five minutes more, why not, and then I arose. Oh how great to be a golden oldie, retired, and do what you want to do, but duty calls. First of all remove sheets, duvet covers and cushion covers from bed, leaving Mr. Swiss a clear path for doing the rest. Eat breakfast, have a look at the computer world, clean the place up, a visit to the bathroom and I was ready to go. I was not really going anywhere. The kitchen was waiting for its weekly clean which I, of course, enjoy tremendously.

Mr. Swiss decided he would start sorting things out to put into our hobby room downstairs.

“What shall I do with all these CD’s?” he called.

My answer “nothing at the moment I am cleaning the kitchen.”

“No deal at the moment I am cleaning the kitchen. Just leave them on the desk.”

It was then that Tabby cat decided to have a look at what Mr. and Mrs. Human were playing at. Mr. Swiss had prepared a trolly to remove items to the basement. Tabby somehow got the idea that the trolly was intended for her.

She soon decided that the noise and movments from the cleaning operations were not perfect for feline ears, so she decided to have a sleep with her sister who was already in her private nirvana.

When my kitchen cleansing operations were finished, I decided I would have a look at the CD situation. Unknown to my other half, I had already planned the new place for the CDs, so they were put away out of sight in a cupboard .

Mr. Swiss eventually disappeared to the hobby room in the basement with a trolly full of various magazines he did not want to throw away, some books which no-one had really read in the last couple of years and other various unwanted items, although you never know. They might come in handy.

Of course I was keeping track of all the movements this morning, after all I had a Daily Prompt to write.