If you could relive the past week, would you? Would you change anything? 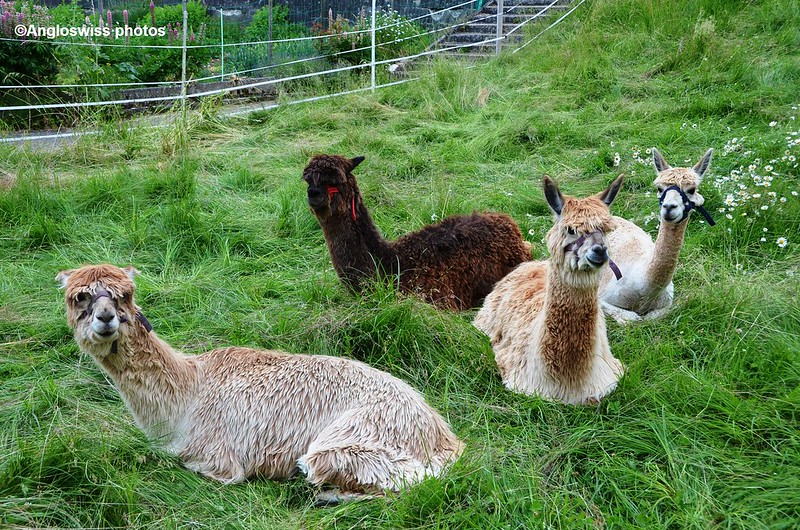 We do not really do groundhogs in the flat lands of Switzerland. If you are lucky and in the higher regions, like the pre Alps you might be enjoying a lunch break on a slope and suddenly a marmot might raise its head and give a signal to his mate. Then No, 2 marmot will stand up on his back legs, appearing from a hole beneath a rock and give an answering whistle. Soon afterwards No. 3 and No. 4 appear and eventually you are surrounded by 20-30 whistling marmots. As I said we do not have them in the lower areas, but I met a group of llamas, or where they alpaca, when I was on a week-end excursion to a village behind range one of the Jura mountains.

A jazz colleague of Mr. Swiss lives there for part of the week, in some sort of cultural centre and they were having an open day with drink, food and some entertainment. It was then I spotted the llamas sitting together watching the action. Generally they just sit, eat, walk around and give a spit now and again. Not the most polite of animals, but are a photo worthy in my collection.

Our groundhogs are called meteorologists and appear daily on the television with the weather forecast. I often have the feeling that the groundhog has a better sense of weather than the weather experts, and Mr. Swiss has been known to use strong words when they tell us that we can look forward to a sunny day and it rains all afternoon. I suppose they are only human.

The WordPress gurus ask me, via one of their disciples, if I would like to relive the past week. If a parcel had arrived containing a WordPress t-shirt, size XXL, I would have said yes, definitely. It would have meant that I would possess two WordPress t-shirts size XXL and Mr. Swiss could have had the other one. How great we would look on a shopping trip in the local supermarket, each of us wearing with pride a WordPress t-shirt. In this case I would be glad if they were in two different colours, preferably one black with gold letters (for me) and one white with blue letters (for Mr. Swiss).

Otherwise I would not like to relive the past week, under no circumstances. We have something in German called a “Hexenschuss” which literally translated means “witches shot”, known in the medical jargon as Lumbago. Yes I am not only a golden oldie in name, but also in person. My body is not spared from the aches and pains of age. It was two evenings ago when I was sitting in my comfy chair outside on the porch reading. I decided it was time to go inside, as I could only read by the built-in illumination of my Kindle app on my iPad. I stood and noticed although my legs were straight; my back had decided to remain warped. It was only with great pain and biting my teeth together that my back decided to return to a straight position. I recognised the cause of this great pain immediately: Mrs. Angloswiss had a touch of lumbago. No, it was not a touch, but a complete 100% painful attack. I crawled inside and continued to read my book.

Luckily I spent a peaceful night as the horizontal position does not have such a negative effect when a witch as myself receives a shot. The next morning I arose, after a five minute test and realised I could walk. I sat for my breakfast. This was a mistake as I had to stand afterwards. This lumbago is not new to me; it is a common ailment if you happen to be a witch combined with golden oldie status. This afternoon I attended my weekly Tai Chi class. I was sure that slow careful movements, as is normal in Tai Chi, would be no problem. The movements were OK, but the standing and waiting for the next movement was not very positive. We are all golden oldies in our group, average age from 70-80, I am one of the youngsters, and so I searched for advice. Our leader is a doctor, but unfortunately she did not have a hypodermic syringe filled with pain killing medicine in her handbag. She told me in four or five days it will disappear. I am now on day three, so only two days to go at the most.

The past week can come again, but perhaps without the lumbago attack.

I was searching for a reason for this ailment and decided it was because I decided to rid my garden of a plant called Lilly of the Valley. They have nice green leaves and in May stalks with little white flowers appear. They are very pretty. It all began with one or two plants that adopted part of my garden. They have now taken over, after five years, and I decided it was time to pull them out. The pulling out was not so difficult, they came willingly, although through the same constant movement of bending and pulling, I believe the witch struck in my back. There are still approximately 20-30 plants to go, but I will wait until I have exorcised my lumbago.

And that is the situation somewhere in a small village in Switzerland where Mrs. Angloswiss is sitting on the porch typing one of her dynamic blogs. Will be back tomorrow, if the witch does not kill me in the meanwhile.

Was this the reason why my back decided to divide into two halves since the week-end. I ascended the steps to our cathedral to get a better photo of the main street on market day. Holding onto the stone railings I managed to descend again.

Now I have problems. Mr. Swiss said it is lumbago, in german the translation would be the witch’s shot. It’s not the first time I have had it an I know it takes a couple of days, about a week, to go away. I am ok when in action, but sitting down and standing up again is a problem. At the moment I feel like this bloke on the statue in front of the cathedral. And he does not look happy at all.