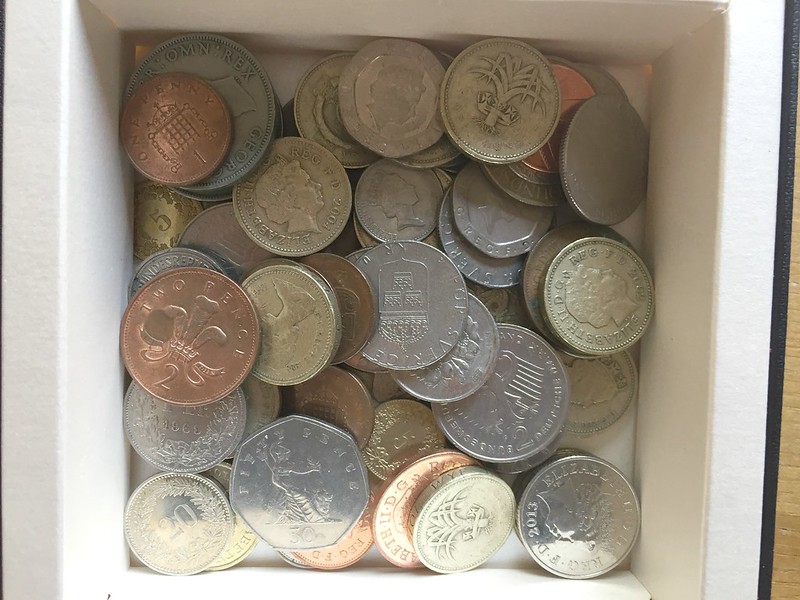 Being a Brit I would visit my dad in London once a year when possible. I live in Switzerland. We never had a Swiss-exit because we decided from the beginning that we did not belong in the EU, only geographically. For this reason the Swiss kept their Swiss francs. The Brits were always something completely different and although they agreed to belong to the EU, probably beause of the wine prices being  cheaper,  they kept their English money, as well as their pints (english beer should only be served by the pint apparently).

The result of my many back and forth travels to London was to acquire a fortune in english change. I grew up in Great Britain with a money system that was quite unique. Decimal? Why do it easy.  Tens and hundreds, even thousands, were too complicated for the british. Why should it be so easy. Our original monetary system was composed of pennies, being 12 of them to a shilling, and a pound which was logically 20 shillings. We also had guineas (21 shillings)  but not as a coin, just as a price. These were the basics. Of course, we also had halfpennies and farthings (quarter of a penny), threepenny pieces and sixpence, as well as half a crown which was 2 shilling and sixpence. Imagine growing up in an english education system and learning it all, but I could do it. None of that adding zero to siplify addition and substracion. Why do it the easy way when you can do it more complicated.

I left London in the throws of the introduction of a decimal sysem. Switzerland no problem, they had decimals with their Swiss francs for some time.

After the decimal system had been abolished in England, there we still some of the old coins in circulation, but they had different values. The Brits had to get used to it, but for my once a year visit I had a mixed purse with various generations of english coins, some decimal and some that had become decimal and some no longer existant. If I bought anything in England at the time I did not have a clue what I had in my hand. The shop assistants were very helpful, and I felt like a complete idiot. My country, but no longer my momey.

I kept two purses at home in Switzerland. My daily purse with the Swiss money and a second purse containing english money for my visits to England. My father passed away last year, and I no longer have intentions of visiting London. Mr. Swiss was a business man and travelled to England now and again, the result being he had also accumulated a fortune in english change.

This week we had a sort out and he gave me a bag full of english change. My english purse was now full and so I had to transfer it into a box – see photo above. It is not a fortune. My No. 2 son will be going to Edinburgh this year for a conference, so I will probably see if I can pass some on before he goes. 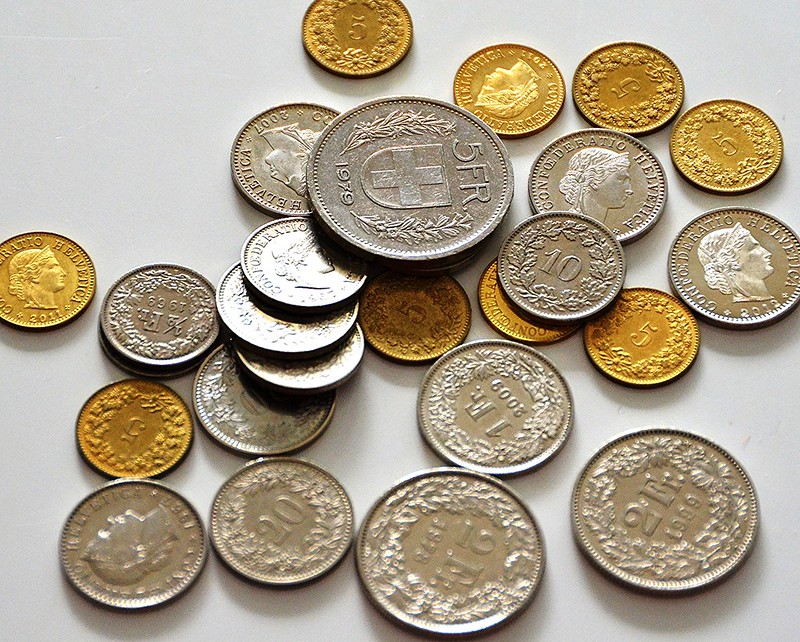 Daily Prompt: Not quite a Fortune 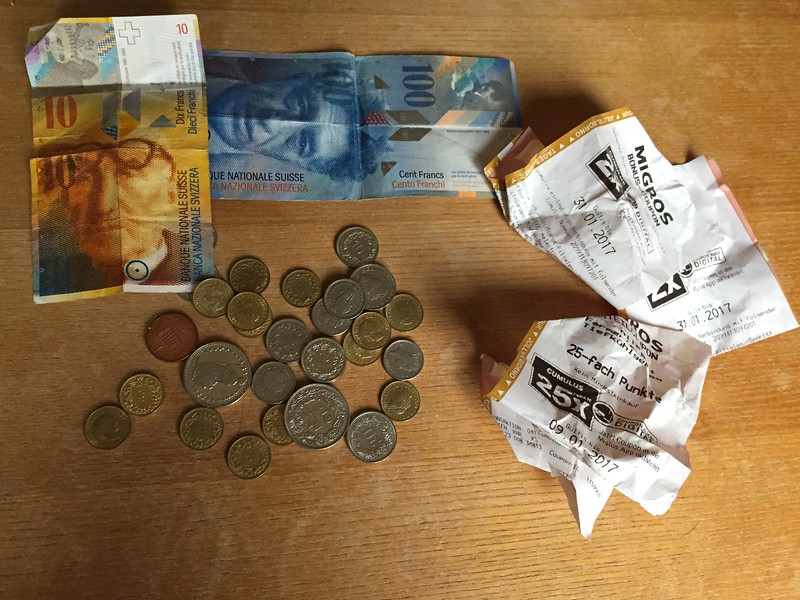 I suppose it depends how you look at it. That is the contents of my purse today: approximately 114 Swiss francs and twice 2x Cumulus points with 25x points if I happen to buy Farmer’s Best deep frozen vegetable, which I do now and again if it has to be quick and I run out of ideas. It is not a fortune, but it is enough. The real money is in the bank – we all have our own systems. The Cumulus points are a supermarket system and I am sure that your supermarkets also have their own system. They are not really giving anything away, because at the end of the day it is all calculated. I have discovered that arriving at the cash desk to pay the bill is becoming a financial puzzle. We would lay down the money and the assistant would give us the change, like real money that would jingle and make your purse bulge.

Purses now only bulge with some bits and pieces, but mainly credit cards and now the lady at the cash desk asks if you have anything to redeem, meaning those points you have printed on a cash receipt. You get 2x Cumulus points if you add one of these receipts to the money, meaning that you will have double the normal points on your balance. At the end of the month the supermarket sends you cheques based on these points which you can use as money in your supermarket and we are all convinced we are getting someting for nothing. We are getting something, but not for nothing, because we paid at the cash desk to let the points add up, thus known in our market as Cumulus, they cumulate. If you do not have these magical 2x receipts, then you get them all the same, but only 1x.

Recently they have began to issue these points 25x for certain items. This now means that shopping is not only a financial puzzle but a question of logistics, organising what you buy, because it depends on whether you get apply an extra 25x cumulus points receipt if you buy the right thing. Are you following me? No, it does not really matter, because I think most of us have lost the thread on the way. I often lose it at the cash desk. You used to choose the goods, pay and go. Now you are confronted with searching through your purse, or perhaps your jacket pockets to see what other special extras you might have (apart from being given the special sticky stamps for your card if you are collecting teddy bears – Christmas thing). You no longer need a purse and money, or even credit cards, but a mini computer to be able to sort it all out.

Fortunes have become digital. I do not blame my dad, who was a centenarian, and kept his money (real money) in his pockets or in a box. One of his main statements was “I don’t want a bank account” as if it was the crime of the centuary. “I don’t want a cheque book” was another phrase he used. He was sure that a cheque book was a fiddle, a scheme where the banks were cheating you.  I do not blame him. His whole life was based on cash and a weekly wage. His pension was paid into an account, but he would have it collected in cash. Sometimes he lost count of how much cash he actually had at home, but he knew what his fortune was. It was in paper and coins. We have moved on of course. Modern day life is all money shifting by digital methods.

We have made progress,  until the day when the computers die.

Daily Prompt: It is only paper