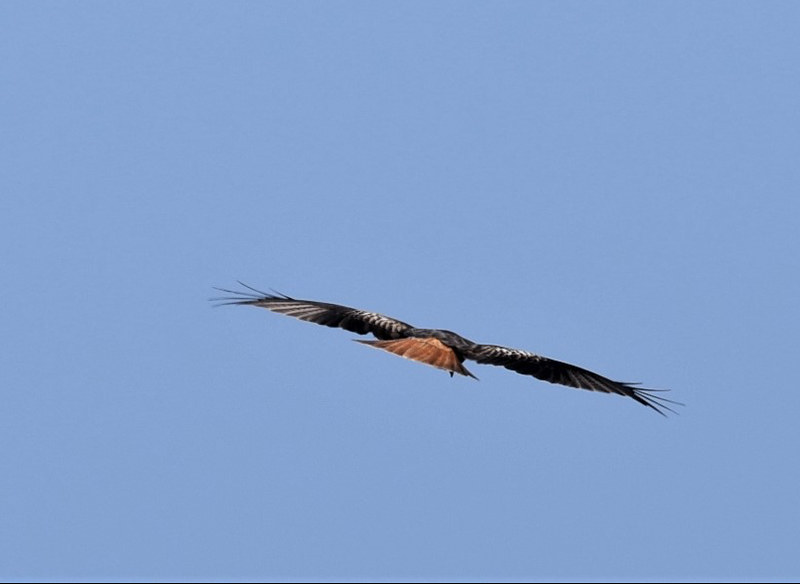 Meet the red kite. Not that I am a bird expert, but seeing the title of this prompt reminded me of one of the few times where I really got a chance to take photos of a bird in flight. It was in 2017, one of the last journeys that Mr. Swiss and I did. It was not so far away, just up a local mountain, the Balmberg,  which even had a road to the top and a bus, although we went by car. Mr. Swiss saw the Kites first of all, recognising them by the forked feathers of their tail. It was a Milan in German so I had to look up the english name. Being a Brit from London town,  I only really knew pigeons and sparrows. 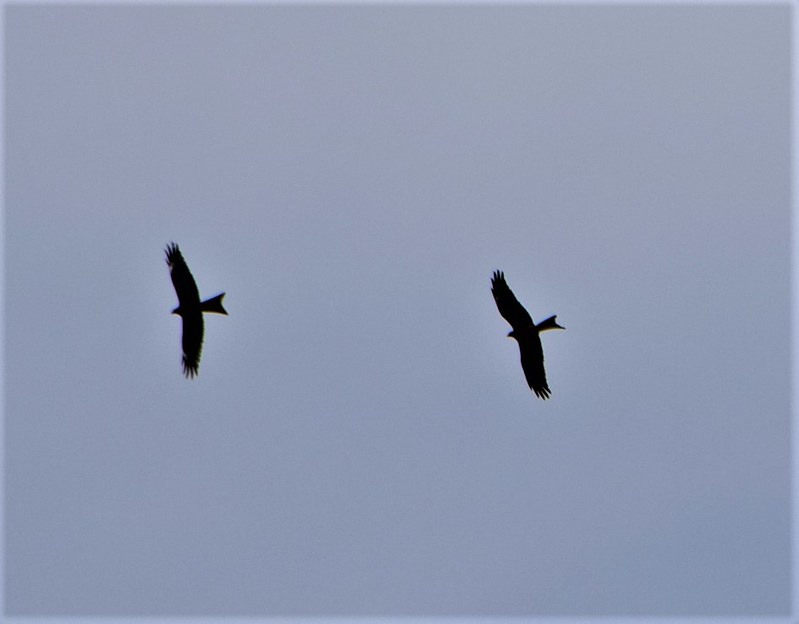 And then we saw a pair flying above our heads. 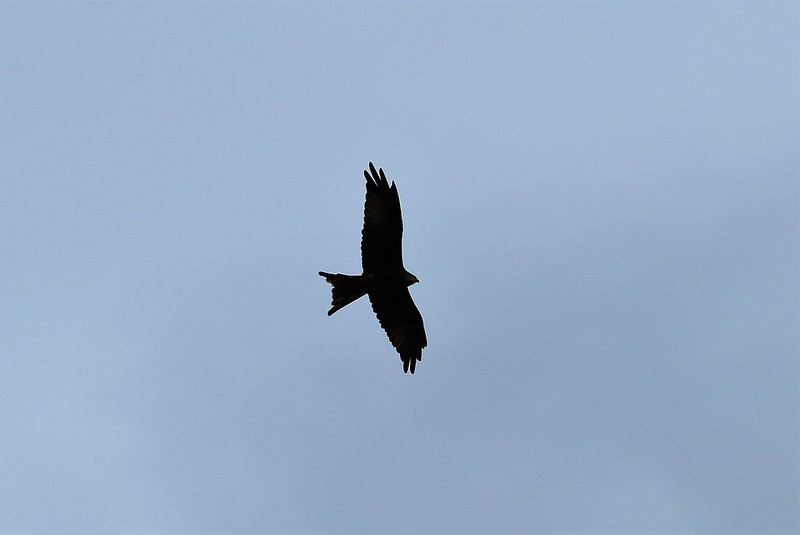 The are quite big birds and I was fascinated. 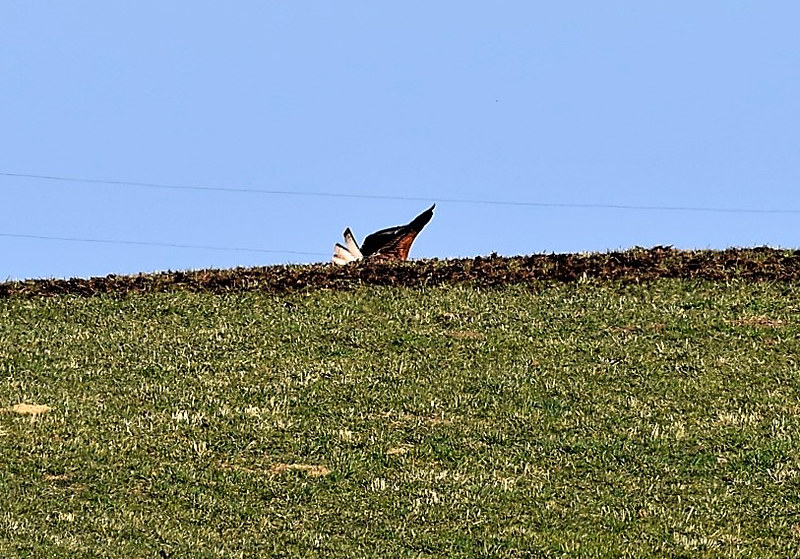 And this one decided to land in front of me, although a bit of a muddled photo. 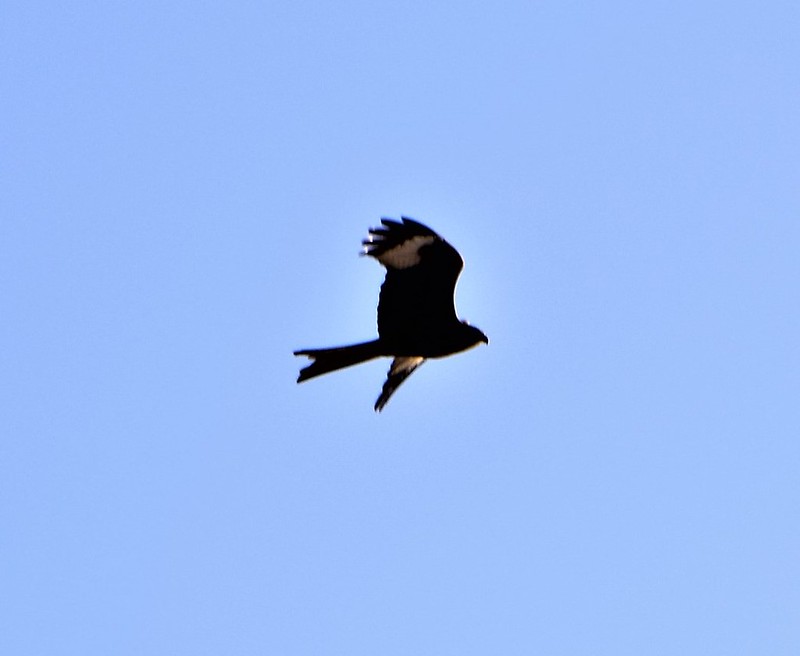 And that was my experience of taking photos of flying birds. Of course I have made my experience with local swans and ducks, but that is more luck than judgement. Swans you can hear before you see them, sounding like the take off of a jet plane, but the kites were alone with me on a mountain and it was a flying show they were offering. The more they flew, the higher they got. 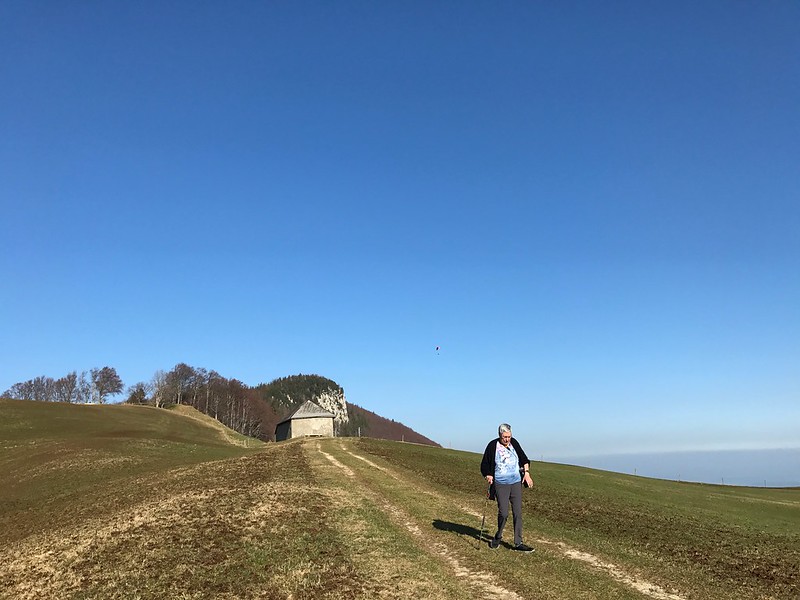 And that was a great memory of a day on the Balmberg. I might go again once, but next time I will be driving the car and I am not so keen on driving up mountains, although in Summer it is quite a good drive. It is only half an hour away from where I live, if the going is good. Now and again the big birds might visit us in the lowlands, so look out for the forked tail.

When faced with confrontation, do you head for the hills or walk straight in? Was there ever a time you wished you’d had the opposite reaction?

I was once in this situation. Waiting for the train to take me to Zürich Airport where I was flying to see my father in London. There was a crush at the doors when the train arrived: everyone pushing. I had my wheelie case with me which I had to lift to board the train. Eventually I pushed my way through, sat down and began to organise my handbag with the tickets. Unfortunately, in the pressure,  a thief had stolen my purse. I had no credit cards, no train ticket and no money. The only thing left was the plane ticket but what was the point when you have nothing else, so I called the whole thing off. If I had taken my time would this had happened? Who knows but probably not.

This was a physical confrontation, but a psychological confrontation can be just as bothersome. It depends on how you feel, who the others are, and whether it is worth it I suppose. I tend to “head for the hills”, in the way of not saying very much. Just let the other party talk themselves into a void, keep your mouth shut and let them get on with it. That is the best way I know, but is that the way I do it? Not always.

I notice that as I approach the platinum oldie stage, from the golden oldie stage, I now ask what is the point of arguing. I am not very good at arguing in any case. If I lose my temper I also lose the thread of the argument. It is really some sort of competition we humans have with each other, “I will have the last word” and then we have won. With the years I realise it is just not worth it.

One of my favourite confrontations is in the local supermarket. This might be a Swiss sort of thing, but sometimes I have to be careful not to laugh out loud, but please bear in mind I have to do all this in the local lingo, Swiss German. Of course I speak it more or less fluently but an accent always remains. Here is the situation:

I am buying meat at the butchers and there is another lady standing next to me. Now I have not made a psychological analysis of who was there first, I do not really care. However the lady next to me has done this. Perhaps she is older than me, perhaps she had an argument with the neighbour before she left her house, or perhaps she had killed her husband because she found out he was cheating on her.

All of these things are hypothetical of course and me? I am just standing and waiting my turn under the impression that I was there first; just an automatic human reaction. The butcher looks at me (I may even know him) and he asks

“Whose turn is it?” not wanting to annoy anyone.

I probably am under the mistaken impression that I was there first, so I open my mouth to tell the butcher what I would like.

Suddenly, as if coming from a machine gun, the lady next to me says “I was here first”, emphasises her point with a firm nod of the head and looks at me with a sort of dagger-in-her-eyes stare.

What do I do? Do I speak even louder and say “I was here first, wait your turn”, do I throw my bag at her or do I say nothing. In the meanwhile the butcher is confused. “What shall I do” he is thinking. “Shall I ignore them and let them get on with it or shall I go ahead and serve the lady I was sure was here first” (knowing it was me in any case). Of course he says nothing more and hopes, even prays, that the lady that spoke first will give way to the lady who now has decided to take over and get served first.

In the meanwhile I have to do the right thing, which in my eyes is not right, and tell this arrogant b***h standing next to me “Sorry, that is ok, go ahead”. She then stands even taller than before and places her order with the butcher, a righteous undertone in her voice. The butcher makes a sigh of relief, I keep my mouth shut, but glare at the same time towards the self-righteous lady standing next to me, and let her have her way. The whole process cost me a few minutes of my time, no nerves (I remain cool) and she is now convinced she was right and the butcher is thinking “women!”.

So that is how I do it. There is no point in charging like a bull in a china (butcher’s) shop. Everyone is happy and carries on as if the world is ok. Perhaps the lady who won now goes home and tells her husband how she won the battle of the butchers, if he is still alive. She might still be working out how to convince the police that she did not kill him after all.

Summing all this up, it is something like a parliamentary debate on a smaller scale. A lot of blah, blah, no-one really believes what you say and the survivor is the one that talks the most and loudest. For me it is just no so important to wish I had done it otherwise. I am just quietly amused at the stupidity of some people. After all – I am always right (aren’t I?????)