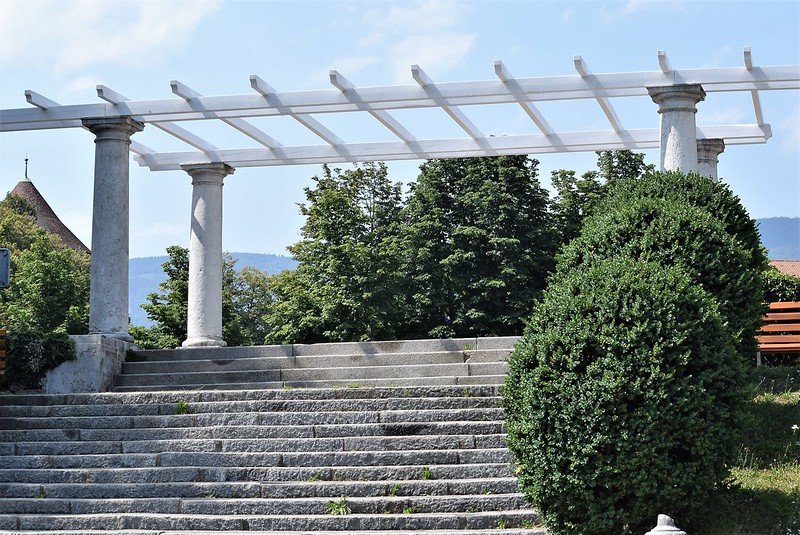 Sometimes you can have too much to choose from. Here are the bushes and the geometric design of the stairs and trellis in a park in the local town of Solothurn, Switzerland. 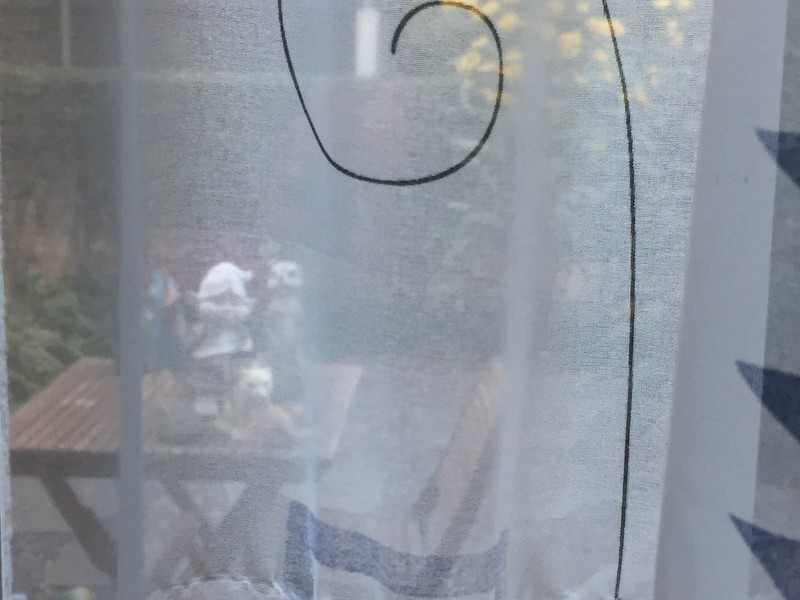 I used to have a curtain, before we changed it to the modern stripy stuff. It seems we had some spectators looking through the curtains. 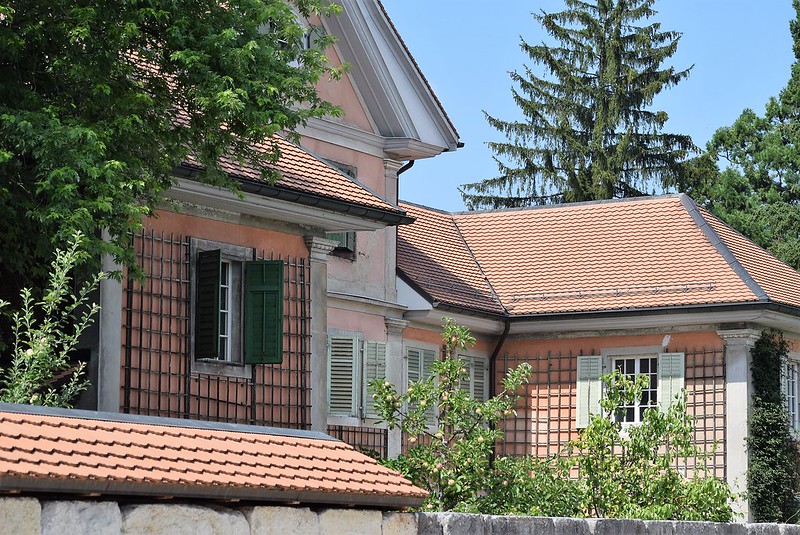 I happened to take a photo of this house a couple of days ago on one of my famous wheelies in my chair. This also seems to cover a bit of brick, a bit of red and a bit of wall, and there are even a few bushes growing. No curtains, we tend to have blinds, but there are windows. 🙂 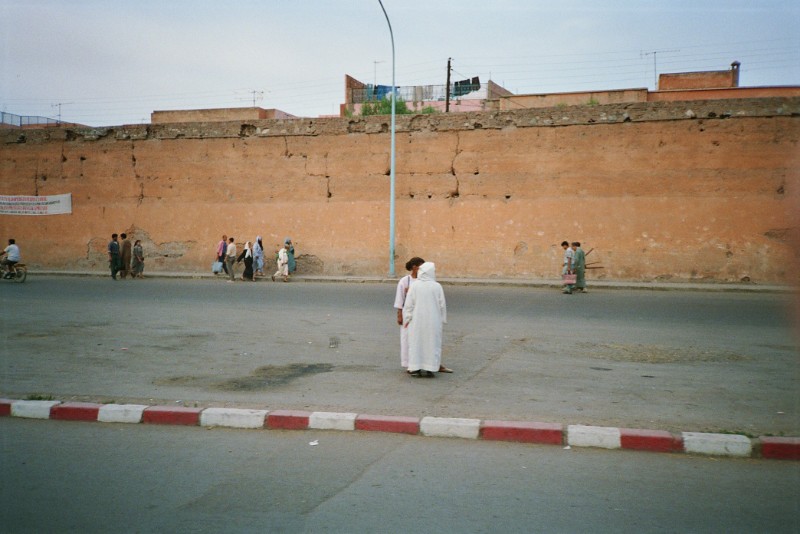 I never really know where to go with these one word prompts. Do not get me wrong, I like them, gives food for thought and you can go in which direction you want to. What do you do in this predicament? Having about 16,000 photos online I used the tag “brick” and got two windows. I am not always so exact with my tags, but probably the windows were in a brick wall. I then progressed and entered the word “wall”, walls being mainly built with bricks, and the above photo appeared. It is part of the wall surrounding the town of Marrakesh in Morocco. The whole town is enclosed behind this brick wall and I wondered is it to keep the people out or in? You never know? As you can see it seems to be a meeting point of people probably on their way home after visiting what was enclosed within the walls. This was in 1990, and perhaps the wall has now been extended since to include those that managed to escape.

My memories of Marrakesh were red brick everywhere, even the earth was red. I decided to discover why. Internet has a lot of information about Marrakesh, its red earth, red walls and red everything, but I did not find an explanation why it was red. Perhaps they tipped a few barrels of red paint into it to make it famous as the red town. 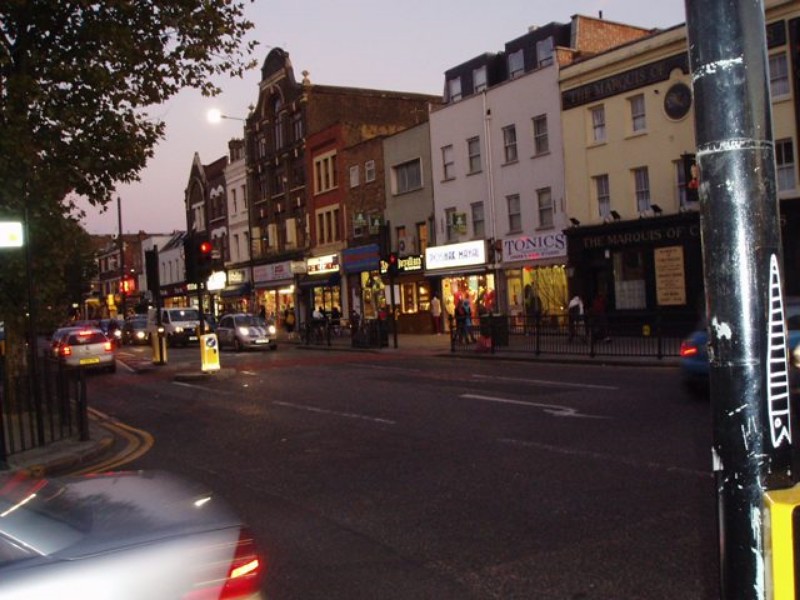 I grew up amongst bricks, they were everywhere as in the photo of Bethnal Green Road in East London. Now and again a tree might have fought its way through a creack in the cement on the streets, even a stinging nettle, or if you were in luck, a daisy. Brick dust was in the air, especially after a storm. It was then wet brick dust that you inhaled into your lungs. We had a few parks, which were also surrounded by brick buildings. Our house was made of bricks, but it was definitely not the House that Jack Built, more like something pieced together with the bricks that were left over.

My playground as a kid were brick, the ruins of the buildings bombed in the war. There were bricks everywhere. We would even collect them an make piles of them as kids.When you arrived home mum would take one look, and then she would scrub your face with a damp flannel to remove the grime of the street. I had brick dust on my shoes and under the finger nails, it was all part of life. Even today, if it rains in our local town, the smell reminds me of the years gone past. Of course our bricks in East London were old and dirty and they had cracks and holes, but they were nostalgic.

Today’s bricks are more solid and the red colour has become a nice sterile grey. This is a wall in the making. It became part of the parking lot at out local supermarket. Notice the clean sharp lines of the construction, nice and straight and parallel. You only get perfect brick walls like that in Switzerland. 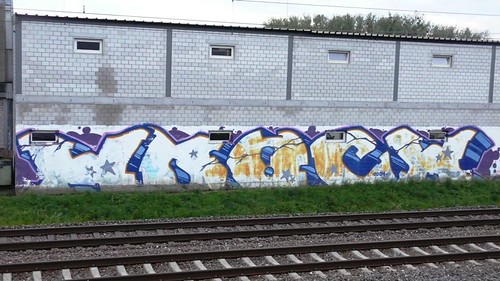 Of course there are some people that just cannot look at a plain brick wall without having to do something to improve it. This wall was near my office window in the village of Bellach where I worked for many years. As you can see the railway runs next to it, part of the line from Zürich to Geneva. The artworks, or graffiti, just appeared one morning. No-one knew who did it, but it was probably a budding artist with a few tins of spray paint that wanted to try his talent out on a brick wall. It broke up the monotony of looking at a plain brick wall I must say.

Walls can be very interesting, according to what you do with them. 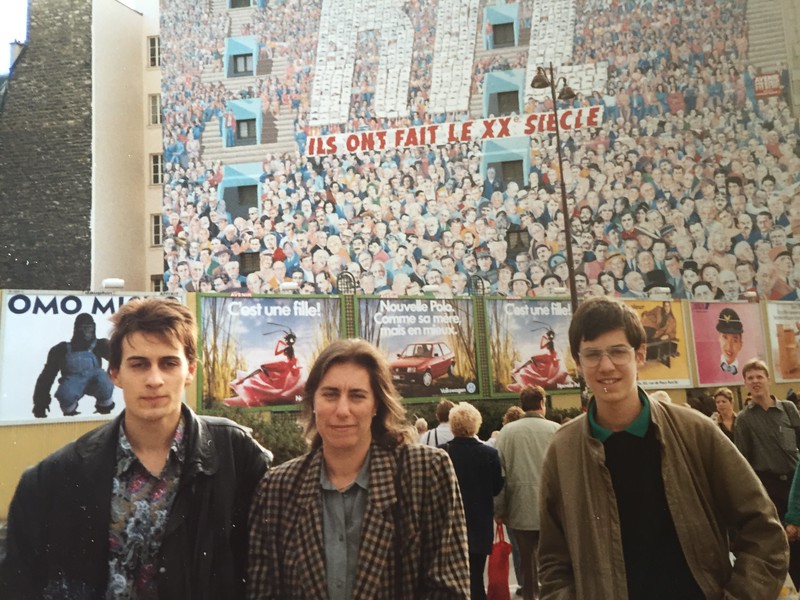 This is a family photo of me in the middle and no. 1 son on the left with No. 2 son on the right taken in Paris just around the corner to Bir Hakim Metro station near the eiffel Tower when I was young and lovely and had no grey hair. We were staying in a nearbye hotel and I always marvelled at the wall of painted faces that you can see behind us when I walked past, most of them known personalities. Mr. Swiss and I visited Paris again in 1990 and the faces were gone, the whole site was rebuilt unfortunately, but it was a work of art and all on a brick wall.

So we have now done a complete tour of brick walls. I noticed in our local supermarket you can buy bricks for a few francs each, they are always useful to have laying around. You might want to throw one through the jeweller’s shop window, or just as a hobby collecting them, after all they are just another brick for the war (yea I got that one in thanks to Pink Floyd).