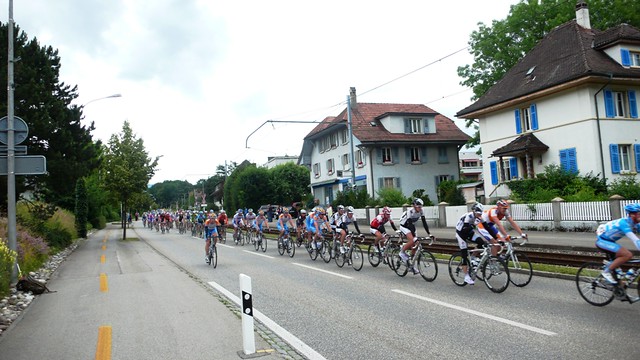 This is the national bike race, the Tour de Suisse, when they drove through our village some years ago.

Anyone can ride a bike, that is anyone except for me. I really tried, from the age of standing on my own legs when all the other kids were proud to have their first bike and I was still walking. Mum could not ride a bike, but she never had one and so she probably decided that it would be far too dangerous for me in case I fell and killed myself or broke something.

My own kids had bikes, they had to take the bike test at school where they drove on a certain route locally and there were miniature road signs. A policeman would be watching to see that they did it all correctly. Even my autistic son took the test and passed. He can ride a bike. In the meanwhile i never gave up. Of course, it was all a matter of balance. Peddling was no problem, just push one foot after the other, but you had to stay upright and not wobble to one side. I remember when Mr. Swiss took me with him on the bike to give me a lesson. I was then about 40 years old, but still could not stay upright. I knew someone with a bike shop and he said he would teach me and I said if we were successful I would buy my first bike at his shop. I never bought that bike and I do not think he still has the shop.

If a bike had three wheels there would be no problem, but two wheels? No, never. My wheelchair has four wheels and two auxiliary wheels for helping to go up and down the kerbs on the road, but it also has a motor. I am a perfect wheelchair driver, no problem. And yes I did try with a motor scooter. I was sure that the increased speed would keep me upright, but it became a Mission Impossible (I am sure Tom Cruise was copying me).

Of course I can drive a car it has four wheels. The only problem with my first driving lesson was the steering. The instructor sat next to me and knew I had an idea of putting the gear in and driving by balancing the clutch with the gas pedal. Unfortunately he did not say anything about the steering and on my first journey he took over the steering wheel and I did the rest. I passed my test after about 90 driving lessons, but it was always the steering, so let us not talk about balance.

Oh did I tell you I broke my leg at the  beginning of this year? I told you my legs are not attached to my body and somehow in my construction they forgot to put a right and left indicator in my brain. It is all a matter of balance. At least my neurologist gave his permission to drive a car, but only an automatic. He said as my left leg no longer does what it should it makes not difference. With an automatic I only need my right leg. My only problem is lifing my left leg to get it into the car 🙂