At least I think they are mums. Just a little too small to be a fully fledged dahlia.

It was a great night with the boys in the local bar. Unfortunately the next morning left him with a hangover and quite a giddy head. It was certainly the wrong formula for plowing the fields and sewing the seed. It all happened during carnival time, a few months ago and now there is the result. He was wondering how to explain  to the farmer that the wheat was not growing in neat rows.

I just live in a tranquil place. I sometimes wonder if people actually live here, or whether it is all scenery for a TV show.

I should really give myself a push in the morning to sit down and eat breakfast and see what the computer is doing, but I just dither around fiddling with various stuff until I actually sit down and begin to do something useful. I actually start with my iPad some time very early, but then I am still in bed, and make a sleep break now and again. Anyhow this morning has got to a good start, sun shining, blue skies and ready to go.

Yesterday I was planning on an adventure in the afternoon and Mr. Swiss decided we could go for a journey together. Walking along and holding hands is no longer in the programme as it used to be. He goes by scooter and I choose between my scooter or wheelchair. I decided on the wheelchair yesterday as it was full power. 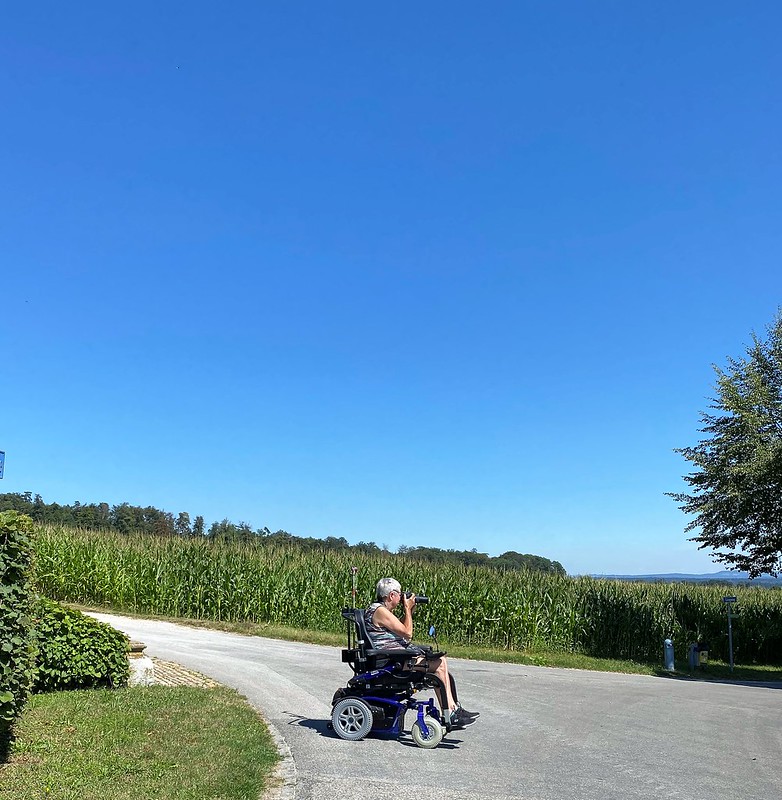 I even had my own photographer with me taking photos of me taking photos: something completely different. Here I am next to the corn field by the local castle. He is still getting the hang of photography on his new iPhone 11, so I had to give him a hand with uploading them.

I am not sure if the birds are now preparing for their migration to warmer parts, but there was a real demonstration from a flock in the air yesterday.

The geese pair (or perhaps some sort of duck) are quite active. It seems to be mother on the left and her kid on the right that still has some fluff.

There were also a couple of chickens walking around. I think this one is a rooster, but am not sure. It seems to be something special

Now and again I had to leave Mr. Swiss to his own devices as I was busy capturing a few photos. He also took a few photos but is not as adventurous as I am.

When we got home I was busy uploading my photos. Suddenly I saw this arrive on the open garden cupboard door. As my camera was without its card as I had it in the computer, I took a quick photo with my mobile phone.

I could see it was a dragon fly, but really big. We generally just have the damsel flies but not the real thing. Of course I had to have a look to see what it actually was. I found it in the computer named as a Golden ringed dragonfly. It seems they are the biggest species to be found in the UK but I found nothing about being in Switzerland. The eggs are laid in mud in water and need 2-5 years until they emerge as a dragonfly. I had never seen one before and it seems to be something a little rare. He stayed awhile before flying off to discover the world.

Today I am off shopping in the afternoon for the week-end food and in between will be ironing the bed linen that I washed yesterday.  The trials of a housewife. Now I must be off for a circular tour of the apartment. Already Friday, the days go so quickly. Have a good one, and try to take it easy, which is mostly easier said than done.

And here I am disappearing into the distance.