I am still fascinated by this white newly decorated old kiosk which was actually closed seven years ago in the underpath as you go into town. It has now been re-opened in the name of Zarte, a current artistic happening in our town. I was passing through yesterday and got into a conversation with the young man that seems to be responsible. The complete design in in white and all the articles are white, so I asked him what the idea was behind it.

He laughed and asked me what I thought would be the big idea. The only thing that came to my mind was something to do with washing powder making everything white. He then explained that although it was an art concept, it was also at attempt to bring the closed kiosk back to life again and arise interest in the population. I remember it being a kiosk and he told me that it was closed because it was simply not making any turnover, very people visited it. He said since the exhibition he has three people that have interest in doing something with it, but nothing concrete. He found the best idea would be a bar and I told him we have enough bars in our town, and in the corona days it would not be a good idea. And so he asked me for my ideas. Of course I had none at that time, but told him I would think about it now that I know that it might lead somewhere.

He said he would be there until September, so I would have plenty of time. In the meanwhile the young man is taking photos and mounting on some of the lamps in the underground passage.

Here is one of them, and it certainly adds interest to the underpath. He also took a photo through the mirror of my wheelchair with a reflection of the kiosk, but it has not  yet been mounted on the lamp. In the meanwhile at least there is something of interest in the old kiosk which had mostly become an opportunity for various graffiti designs. 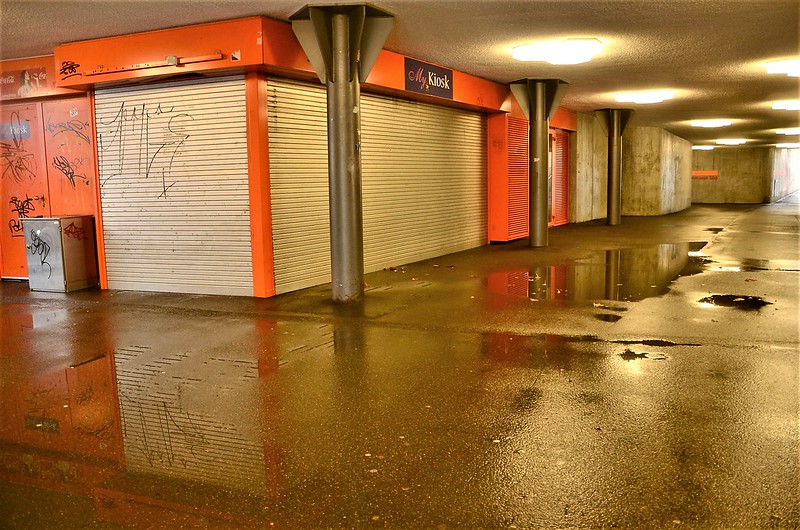 The new place is behind the grey blinds which are now at last raised again after seven years.