A cloudy morning today, but at least it did not rain during the night and it is also not raining now. I think the day will develop into a sunny one. It is a relaxed Friday today with the normal morning chores. This week my son’s bed is on the rota for refreshing with clean sheets, so I can leave him to it. I am in a tidying mood at the moment, although not too extreme. My porch now looks better after I cleared away the various objects laying under the table. I have even organised my watering cans, meaning filling them with water with the various sorts of fertiliser I have: one for cactus, one for my potted calla and one for the rest. Plants also need food now and again.  I now have the garden cupboard to finish. I began a week ago and did half of it. Now I have to tidy the other half to make it uncomfortable for a new mouse home during the colder days. I had two living there last Winter, and did they make a mess.

Yesterday I did an hour’s tour of our part of the village. I did not want to go far, and had no shopping to do in town. At the end of the path we have a meadow reserved for a few cows. I was not sure if they had returned this year, but they were there. They used to be the only cows in the village with real horns, but it seems that this year the farmer had decided they should remain hornless.

It’s a shame really, a cow is not so interesting without its horns. The reason is apparently they can be dangerous and harm each other. I find it ridiculous. Human finger nails can also be dangerous if the grow too long and sharp, but we do not remove them at birth, so why remove the horns on the calves before they even start to grow. We once had a national vote in Switzerland, a referendum, that the cows should be allowed to keep their horns. I voted yes, but unfortunately the majority did not, so we still have many hornless cows.

Trees are flowering everywhere at the moment and I noticed this strange tree yesterday. I naturally did a search for the name and it is apparently a bottlebrush buckeye, another tree not really common to our country.

Our statistics for corona virus reached another bump in the levels yesterday and this time the cause was one of the towns in our Kanton. Apparently a group met in a restaurant and one of them had the virus, the result being that the daily statistic for Switzerland increased to more than 100 new infections and there are 300 in isolation being tested.  Sometimes I think if it were not for the stupidity of the people the virus could be kept more in check. A week ago we had an average of 20 new cases daily. and now this.

And now to move on to my vacuum cleaner and mop for some occupational therapy. Keep well and safe everyone. I leave you with a view I saw yesterday on my wheelie through the village over our local countryside. 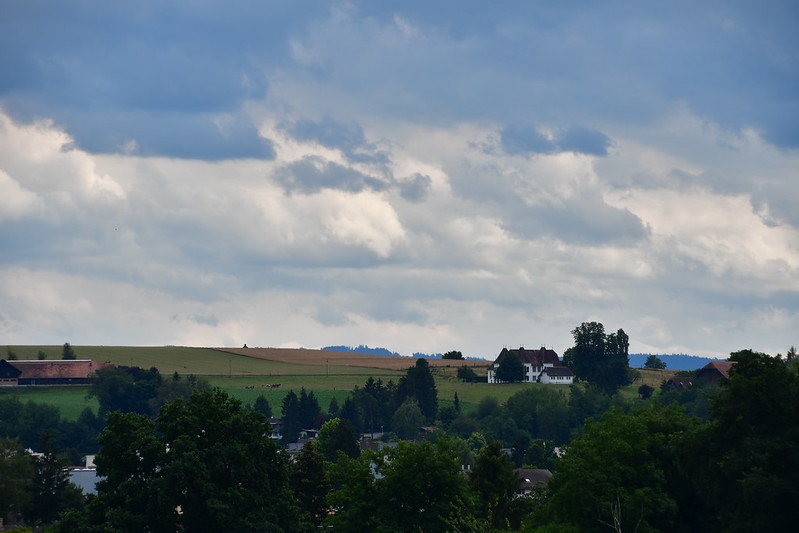