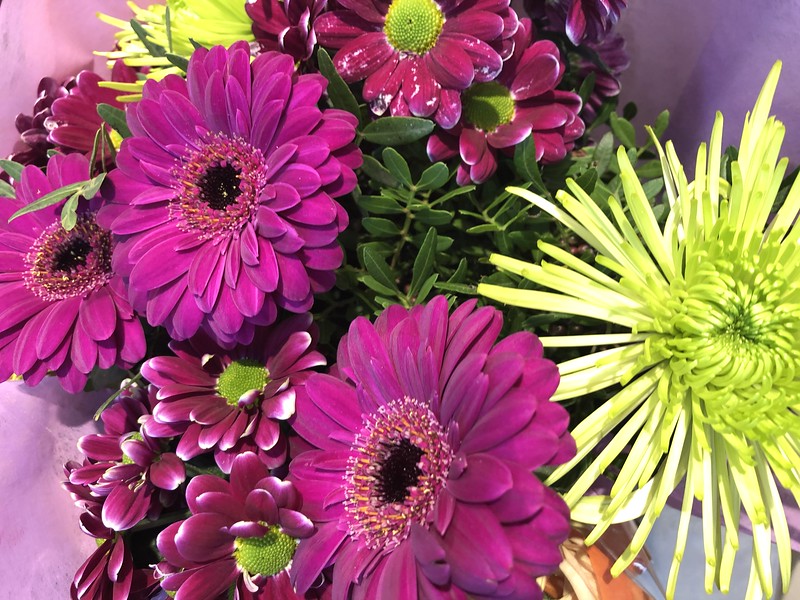 A bit of a mixture here, but the one on the right is definitely a chrysanthemum, I think. The red ones might be gerbera, but they fit in the landscape of the photo.

You asked for it, so you got it. A fresh arrival from my telephone camera as I am sitting outside on the porch. As you grow older you no longer have such a peaches and cream complexion, and it resembles more the Great Wall of China, but who cares. Photos often show more than you want them to. 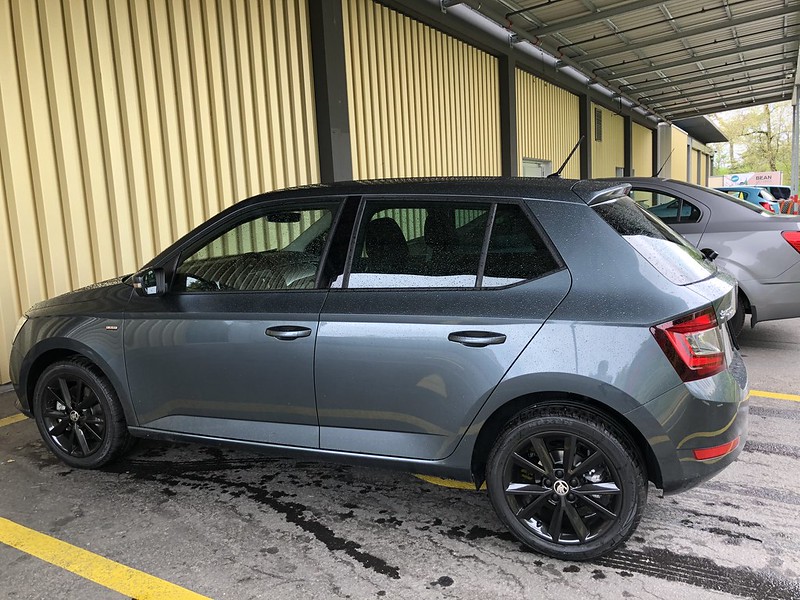 I surrender. Do I really need a car? No more hoping for a free parking spot for the handicapped. I have come to the conclusion that I do not need a car. I only drive to the supermarket three times a week. I did a test at the week end and went in my electric wheelchair to the supermarket in the local town. It has been reorganised, much better and everything on the ground floor. I can shop easily and when I have my goods, it will be packed in bags, perhaps two or three according to how much I buy.

We have a “collectors” organisation. They take your shopping and bring it home to you within 2-3 hours for a minimum charge, all done by bicycle with a large attachment for the goods. They have a desk in all the main supermarkets where it is all organised. Of course if I have a few urgent things I need I can take them myself, but otherwise why do I have to have a car, pay for petrol, insurance and all the other trimmings. I am not getting younger and to be quite honest I no longer enjoy being on the road and so I have decided – no more car and enjoy the rest that remains by being free to travel where I want to and not on the roads to the store.

Mr. Swiss and I no longer go places in the car. If necessary to travel we have a very good bus system and rail system and at last I can relax and no more stress. We have a store just along the road, one in town and even in the next village which is all possible to reach with my electric wheelchair. So watch this space, there will be more to say. 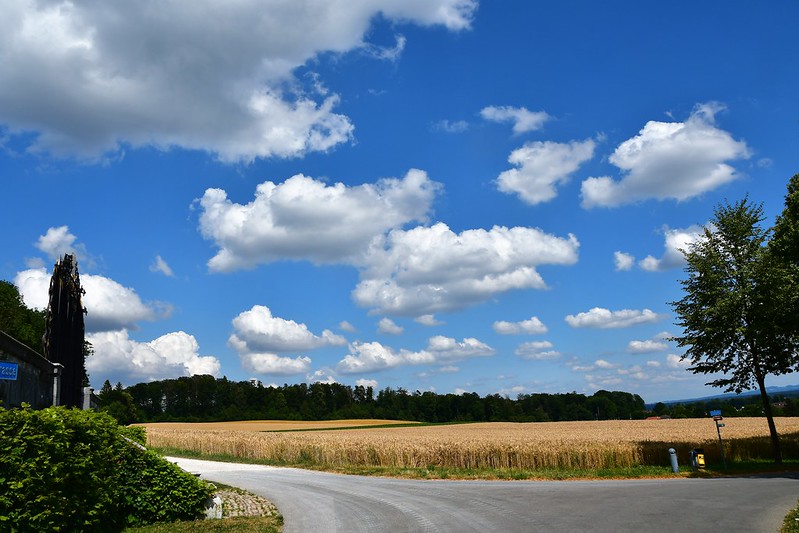 I seem to live in a landscape

May Photo a Day Challenge: 18. Landscape

The sun decided to shine on me as I looked outside this morning and we have blue skies. I am hoping it will stay this way. I have decided to get out a little more now that the hairy pea invasion is not invading so much. I had a bit of a shock at the beginning of the week-end when the infection statistics were report for a day with almost 100 cases. So many we  had not had in Switzerland for a few weeks. However, no panic. A day later we had the message that whoever issues the statistics received false news and it was only 10-20 new cases. At the moment it seems to have stabilised here with a daily minimal infection rate. The virus is still hovering around, but no longer so much and we can safely break out and enjoy a limited amount of freedom again. Limited because there are still precautions of keeping a safe distance from each other and controlled entrances in the shops, but nothing that disturbs daily life. It is still not easy to order groceries on line from the store, as they still have no capacity to cope. However there are other possibilities.

I discovered with a shock that next Thursday all the stores here will be closed for Ascension Day. It would not bother me so much, but I was then planning on doing the week-end shopping as on Friday after lunch I have to be somewhere else that cannot be postponed, In that case I now have to stress around at the beginning of Friday afternoon and also get my shopping done. It will be quite a stress for me.

However I did managed to get out again in my wheelchair yesterday and even met a few cows. It is great to be back in the old routine again. There were a few other walkers on their way, but not too many and it was good to breathe the fresh country air again. I think the cows were also pleased to see me.

There were even a couple of chickens pecking around. I met a colleague on my way and she too had been in isolation for a while. She is also handicapped and needs support when walking and told me that yesterday was a first for her for a long while to take a stroll in the area. She had been shopping in the store in the meanwhile now and again similar to me and told me how one person in the store told her she should be ashamed of herself going out and taking a risk with the shopping. Actually he told her she was an idiot. This might be, but it is not so easy to give strangers a shopping list and money that you do not know to do your shopping. It is easy to say people will help you, ask for their telephone number at the local authorities, but that is theory. I tried it as well, and there were too many obstacles in the way. It was easier to go myself and I noticed due to our new corona laws, it was quite comfortable shopping with less people in the store.

Anyhow we are now more or less back to how it was and I will be off this afternoon on a quest for food. My problem is that I am not just shopping for me alone, which would be no great problem, but there is Mr. Swiss and son No. 1 to cope for as well.

Nature is certainly showing herself from he best side at the moment and I saw this clematis flowering in one of the gardens on my wheelie.

And now to move on to a few chores I have.

On my tour yesterday it was good to see again the view I have of our local Jura mountain chain, always a good beginning to my journey.