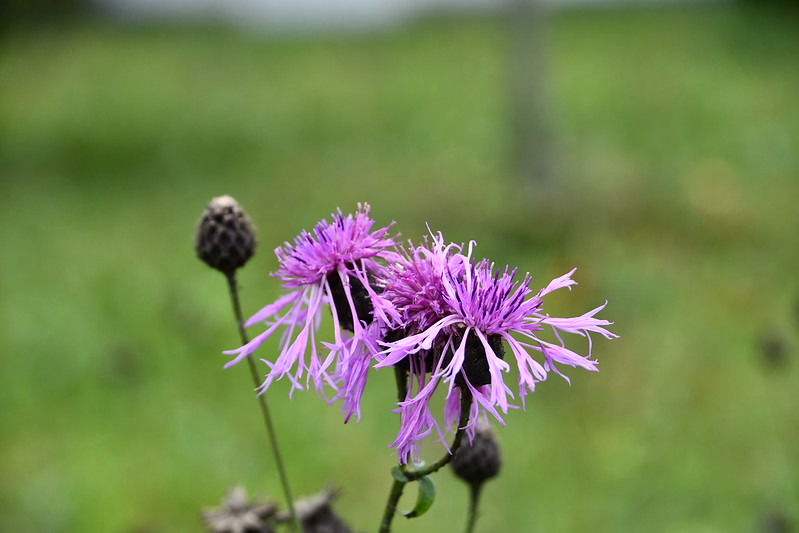 One of the wild flowers in our neighbouring meadow, but so perfect. It really does look a little ragged at the edges. 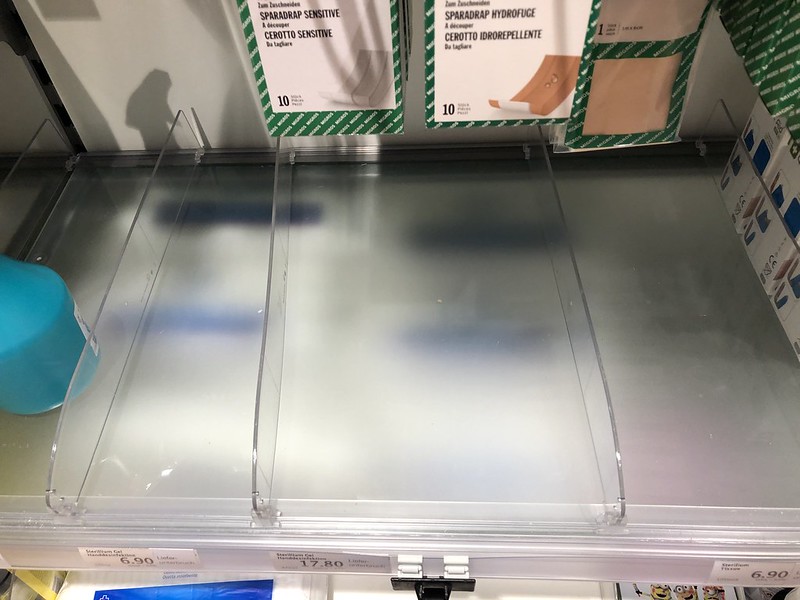 This is an empty space in the store. It has been empty since the beginning of March, perhaps even in February. It used to be full of bottles of hand sanitizer which seems to have disappeared from the image area of perception. It no longer exists. Since we have an invasion of the unknown virus, they have disappeared. I still check for a miracle delivery three times a week when I visit the store, but to no avail. It has disappeared forever and I must be satisfied with soap and water. 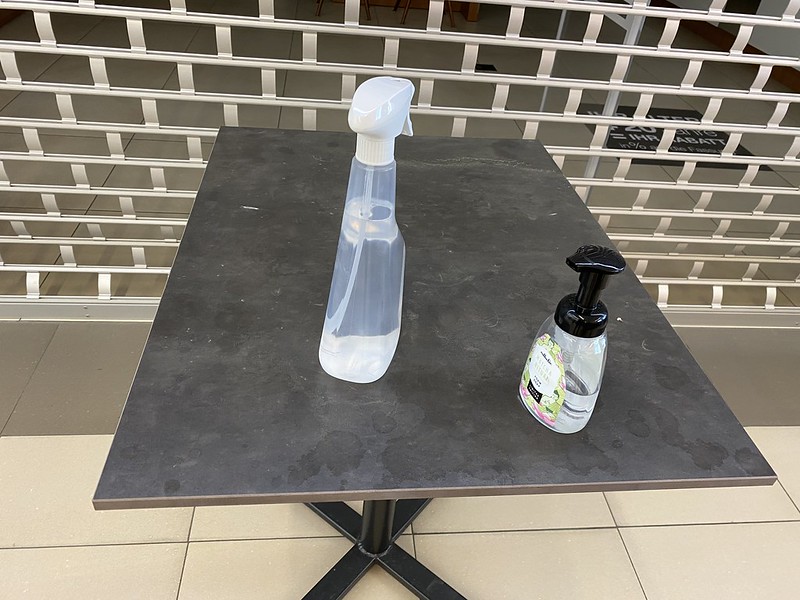 Although when entering and leaving the supermarket I have a table with complimentary alcohol for my hands.

Life is changing, our necessities in life are different. At the end of March it was toilet paper. Now we have enough. There was fear of a food shortage, but after a week of worry it was discovered there was plenty to eat.

What do we really need: not hand sanitzer, but perhaps a weapon to combat the sleeking virus. One day we might have it. In the meanwhile let us wash our hands in alcohol. 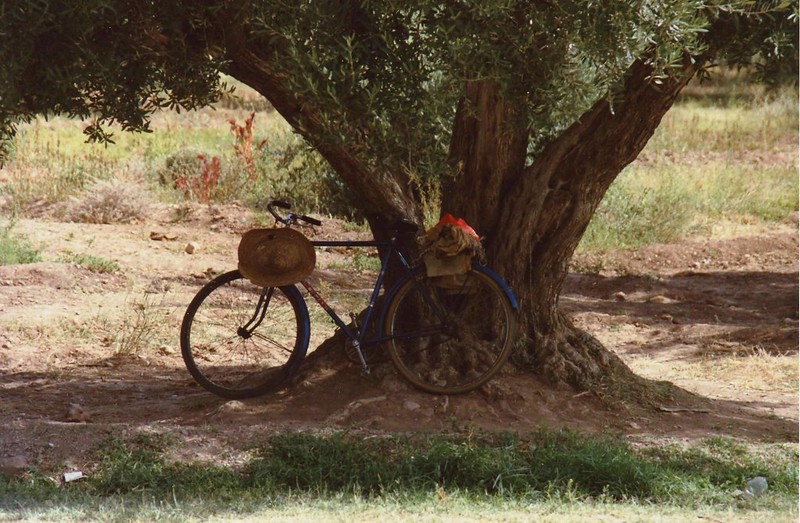 I took this photo in Marrakesh, Morocco. Someone had parked their bike next to a tree. Perhaps this was a nomad travelling around, but I do not think so.

Nomads are no longer as they were, we now live organised lives, have documents to prove who we are and pay our income taxes, although there are still gypsys. They now drive their large Mercedes cars attached to their caravans and travel around Europe. I have seen them when they are in town. The ladies with their long dresses and long hair, speaking their own patois, but mainly French with their children.  They arrive in town, gather in a designated place for a while with their group and then move on. I have seen them in the local supermarket and yes, they are a little different.

My grandmother lived a little on the edge of London, somewhat countryfied. She came from the country and was a little superstitious. They often had visits from gypsys. They would earn their living by repairing pots and pans and my grandmother always gave them work to do. She was sure that if she was not friendly enough they would place a curse on her and her family. 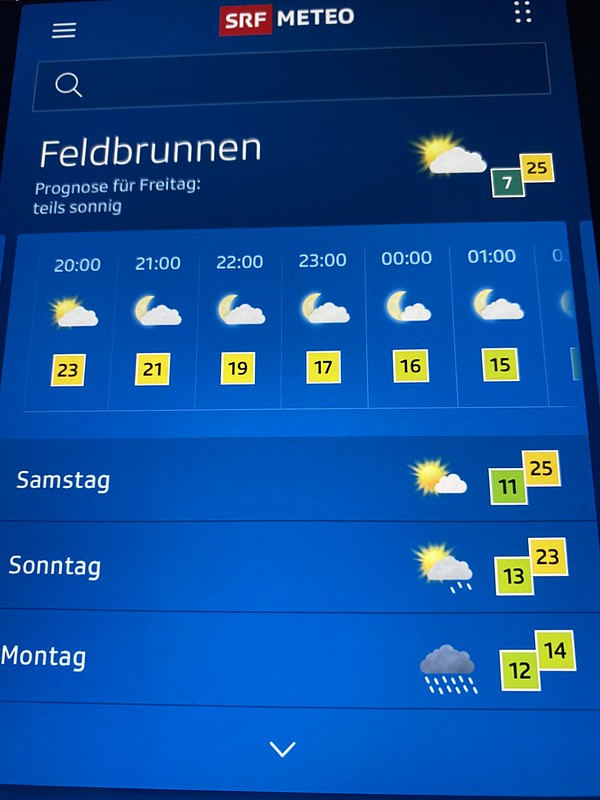 Not very original I know, but today’s weather is at the top, followed by the days until Monday.

May Photo a Day Challenge: 9. Weathered

Another beautiful morning in a forgotten village somewhere in the wilds of Switzerland. Perhaps not quite forgotten, but sometimes we are glad to be ignored and left to our own thing. I got the week-end shopping behind me yesterday and am thankful that everything was available, almost. I needed some lettuce to cook with a meal today, but it was either all gone, or never arrived. Salad items are always a bit risky. However I discovered that there was plenty of packed rucola (some call it rocket or argula I believe). I wanted something to cook and asked one of the shop assistants in the store that I know quite well (I know them all well really) and she said it is a super vegetable and you can pan fry it which was what I was looking for as a side dish veg. So today I will try it. It might be the first of many attempts with rucola. I had often seen it, but never really bought it.

Otherwise everything went fine and I noticed the store is now preparing a little for next week, the day of normal (almost normal) ex lock down. Everything will now be available again, including clothing and cosmetics, although that really did not bother me. I need no new fashionable clothes and cosmetics do not form part of my life style.

The restaurant will also be open for those housewives that like a coffee during their shopping ordeal, but I really do not have the time for such luxury. I go, see, buy and return home.

The bees are really getting busy in my garden and yesterday they were quite co-operative for a few photos.

I also saw this fire bug exploring the spaces in my insect hotel, but I think he was just looking and had no interest in taking a room. My garden is full of these little creatures at the moment. They do no harm and are for me a colourful addition. They are the first to arrived in my garden at the beginning of March and already begin to breed. My insect hotel seems to be a success amongst the insects. I have two, hotels and there is still room for a few more visitors. The special action is still available in the store, and I almost now have enough points for a third hotel. I discovered you can also buy them in the store in a much bigger version, but they are quite expensive. They are really well made out of solid wood. I get a sticky per 20 francs spent in the store and have to have a full card of 40 points to be able to get one free. I do not spend money only for this extra, but when you buy groceries it amounts quickly.

I was thinking about a wheelie excursion today, but decided that Sunday would be better. I have not used my electric wheelchair for a couple of weeks. The battery was fully loaded, but after ignoring it for a couple of weeks I will probably have to give it an upload. Even when you do not use it, it can lose power.

Yesterday there was quite a good concert on the British Television. In the days of keeping your distance the queen gave the musicians and singers her permission to use Buckingham Palace, her London residence, as the surroundings for the concert. Of course it was ideal as in the lockdown days it was all empty of people. The music was good and the backdrop just perfect. Afterwards there was a speech from the Queen in remembrance  of 75 years of VE day to make the end of the second world war. The whole evening was dedicated to this event and there were many old films of how the Brits reacted at the time. I had many fond memories of my mum  and what she told me, and of course dad who could then return from the fighting. My uncle was also then released from being a prisoner of war in Germany after five years. What memories they all were.

I actually had a doctor appointment last week, but she called me to say that something had cropped up in the meanwhile and she wold have to postpone it, unless I could discuss it on the phone. This was ideal and after some time we had dealt with everything necessary. I think she was glad as well.

And now to deal with the Saturday life, which will be quite relaxing, I hope. No special chores to do, just a normal day at home. And now to take my Vitamin D drops to maintain a golden oldie healthy life. Am thinking of all those suffering under the hairy pea infections and its side effects in daily life.