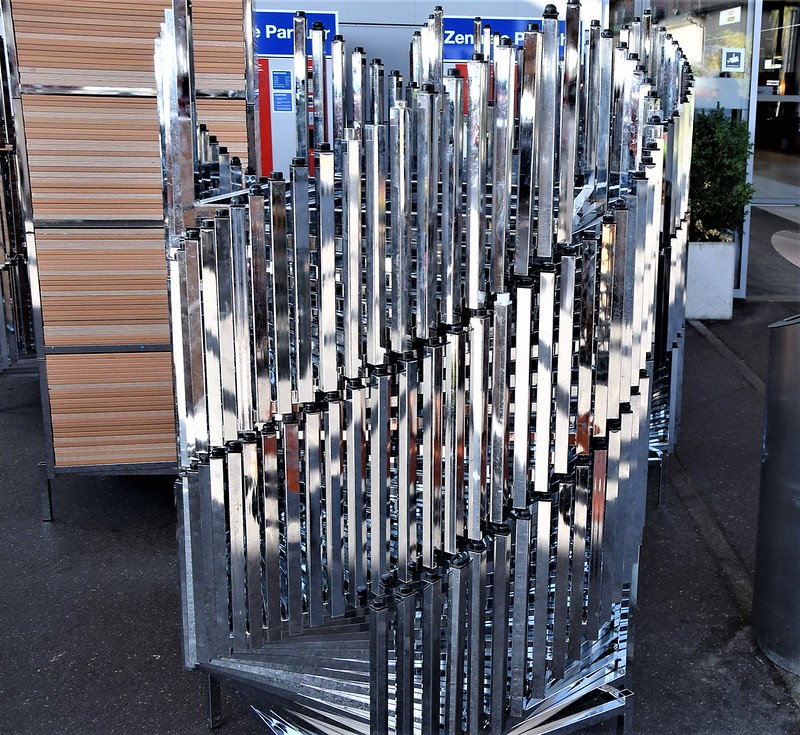 This one looked intriguing to touch. Actually they are exhibition stands in the local store,  inverted and piled up together 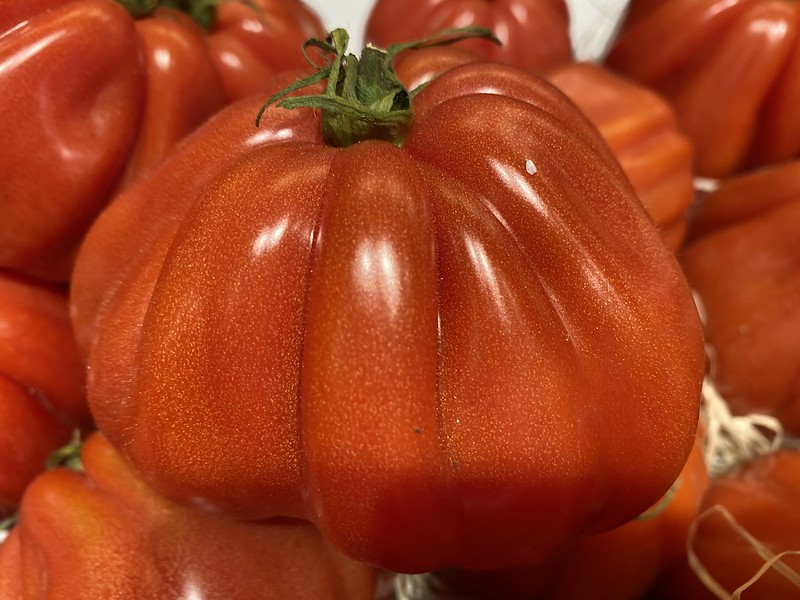 Even vegetables can have their strange shapes and sizes, such as this special tomato.

And this is part of a frame around a photo.

Today you can preview everything online. Make your decision, proceed to pay with your credit car or paypal, whatever you have and that is all you have to do. Even greyhaired golden oldies can do it. In the current situation with the attackers from another world, known as corona or Covid, we have discovered the online way of living. We can even order our dinner online from the restaurant around the corner, with three different menus a day to choose from, so what could be better.

I was at the point of despair at the week-end as the letter “r” on my Mac refused to work without a coaxing thump on the keyboard and that was annoying. How could I refresh my computer page without a “control R”, but that is now a thing of the past. I was advised by some collegial fellow bloggers to order a new keyboard and so I took the plunge and on Sunday evening, after a browse around I online shopped a new keyboard.

I have my own favourite online shop in Switzerland and registered some time ago. The problem is that everyone is ordering online. The entrance to our block is full of parcels in the morning. The neighbours order food, elctronic devices, underwear, even cosmetics online. They are mostly articles that you cannot buy publicly at the moment due to a lockdown, but online has not yet been locked down.

As said I ordered on Sunday and yesterday was advised that my parcel had already left the sellers and was on its way to me. Imagine the suprise when I discovered it this morning at the entrance, together with a king sized parcel for my neighbour, from the same online deliverer.  I unpacked my new treasure and within 5 minitues I had a new perfectly operating keyboard on my computer. As it is a complete replica of the old keyboard I could just place it on top of the old keyboard and it is working perfectly.

I now have ideas of purchasing a keyboard for my iPad, although I am just thinking about it. Do I really need it? Not really, but this online ordering really has its advantanges. I just previewed 5 different keyboards for my iPad and now I am spoiled for choice. 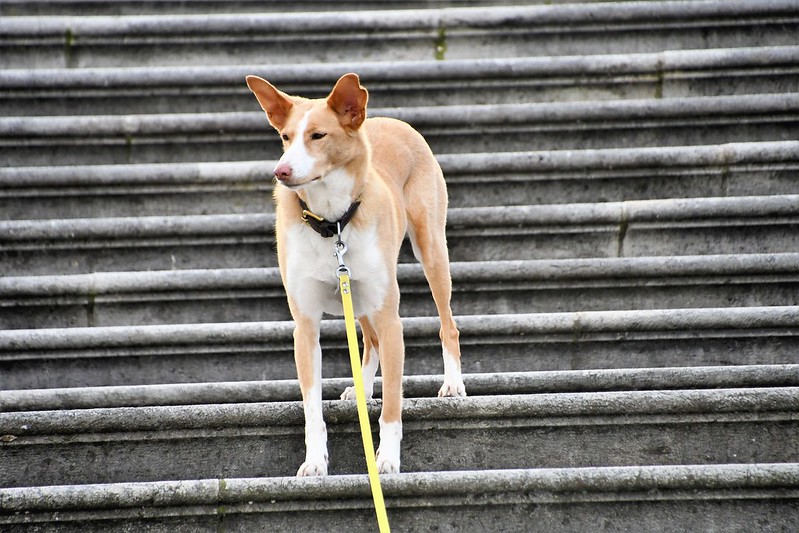 Coyote? The only coyote you might find in Switzerland would be in a zoo and even then I am not sure if we actually have a coyote in a zoo. I once saw this hound in town, standing on the steps to our cathedral. He has the looks of a coyote, perhaps not the yellow colouring of a coyote and I am sure it has a normal bark. There would be nothing howling about this dog, but it is the best I can do. 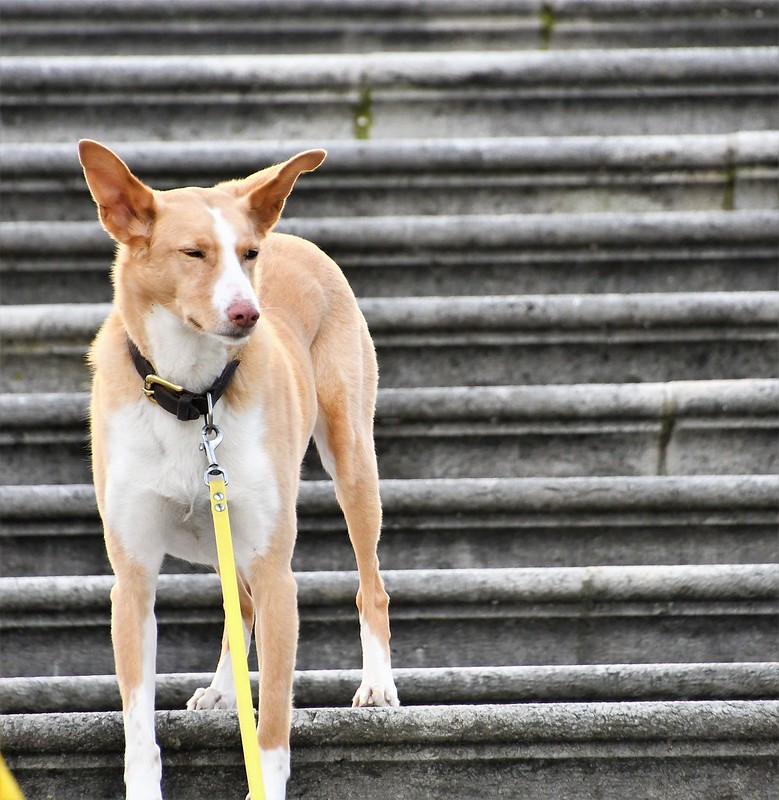 On a closer view it could be a coyote: at least its ears look big enough and it has that sly look in its eyes. 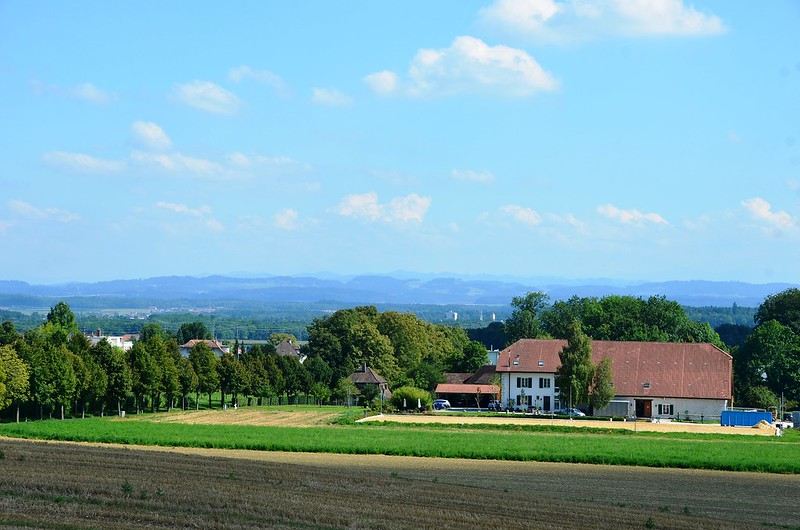 I live in a rustic area, so what better than a photo of my surroundings with the local stables.

Not a very promising start to the day, but it can only get better. It is also raining, but no big deal and after more than a month with no rain, we are all glad that nature now has a chance to catch up, although the Covid 19 has also unwillingly given nature a chance to recover with less traffic burdening exhaust fumes and factories polluting the atomsphere. Perhaps it is psychological, but the air really seems to be clearer and smells better.  I wonder if we have learned something when this invasion of the invisible third party is over – somehow I do not think so. Yesterday was our first day after more than a month that coiffure saloons were again open. They are already completely booked for a month if not more. I did not see such a march on our gardening centers, but it was there. I saw one guy walking through the store holding a potted plant, his trophy of the day probably.  As long as we can eat and buy food without problems I am happy. I am probably one of the rare cases that has a minimum of problems with the lock down. Less people shopping, no stress, and plenty to buy now that the initial panic of famine fear is over. People can be so annoying sometimes.

Yesterday I did my usual tour of the store and found everything I needed. I also had a detour to the pharmacy afterwards and everything went well, even although only four people are allowed into the store at a time. It is a smaller store. Perhaps the assistants are also prefer the stress reduction.

I thought there might be more traffic on the road yesterday but this was not the case. There is just one street where the road surface is being repaired and only one way traffic is allowed on one small stretch. However, it is organised by the repair workers and everything is running smoothly. I had to juggle with part of the road where I have to drive on the pavement, but they had made a quick provisional slope with a provisional tarred surface, so no problem.

I took a look at my raised beds this morning and they are growing nicely. Here I have my moss roses with some coreopsis in the middle and gaura showing at the back. It is a little early for too many flowers, but it is reassuring to know they are again on their way.

This is my herb raised bed, although I have sedum in between as a ground cover. On the right I have my chive patch, next to it thyme and at the back sticking up my savoury which I mainly cook with green beans, a sort of Swiss thing. There is also some origano on the far right at the front, but it is still a small patch as I only planted it a couple of weeks ago.

The raised beds are very pratcial, especially as I can no longer bend so well and often need to cut some herbs for cooking.

On the outside edge of the garden plot we have our wild meadow with a few bushes in between.  Even in the rain they are showing their colours and variety.

Today is a day of isolation so it will be a general clean up and perhaps I might even attack a few windows, although they are clean: it will be just a brush up. As I now have a mask to wear when meeting the crowds, I could perhaps have a practice run at home to see if I can manage with it.

I have also reduced my action in Facebook to a minimum. I always crossposted my entries in Word Press, but no longer bother. Facebook no longer interests me, reminds me of the corner shop at home, where everyone likes to have a chat about their private lives. Perhaps WordPress is similar, but has a good feeling. I am still in Facebook for use of their messenger, and also my ex school site, although rarely have anything to say.  I got news yesterday from from my online supplier that the new keyboard for my Mac is already on its way, so it might even arrive today. Our post parcel service in Switerland is quite strained at the moment as everyone orders online in the days of isolation. Our house entrance is always full of various parcels in the morning ordered by various neighbours. How times change.

Have fun if possible, stay safe and well and enjoy your isolation and lockdown – it is something completely different – we hope.