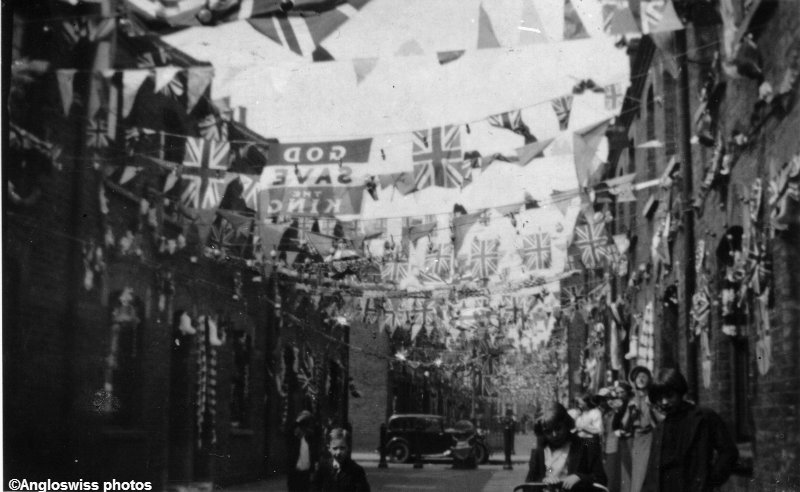 In 1946 World War 2 came to an end. The 5 years of fighting were over and humans could return to their normal daily lives. It took a time to repair the damage, clear away the bombed remains and my childhood playground was the rubble and destroyed buildings, but we came through it all. The photos were taken by my mother and are from the celebrations of the street where my mother lived throughout the five years of the war, with decorations everywhere commemorating the end of it all.

We are now in a so-called lockdown, keeping a distance from the new enemy. It does not come with guns or bombs. It is a quiet enemy, one that makes no noise when it arrives, but it is there. Did it come from some sort of secret laboratory and escaped whilst no-one was looking? It began in a town that I had never heard of, somewhere on the other side of the world, but it decided to spread, carried by unknowing infected humans, perhpas by air wavs and now it is everywhere. We have had many heroes that have wanted to save the world from our crimes against nature. There are still some world leaders, that have tried to take over more areas, through war. We even have the people who are trying to save the world by stopping crimes again the natural course of nature, fracking, factory pollution etc. but even they do not have the answer this time.

Perhaps we have caused this all by ourselves, experimenting somewhere in a secret place, just because you can do it. Who knows.

Will we learn something from it all, will we become a better race, with more consideration to our world? We only have one, there is not a second globe waiting in the wings to take over when we destroy the first one.

The new heroes are the nurses, doctors and perhaps the scientist that will eventually discover a cure for this secret enemy.

3 thoughts on “FOWC with Fandango: Globe”