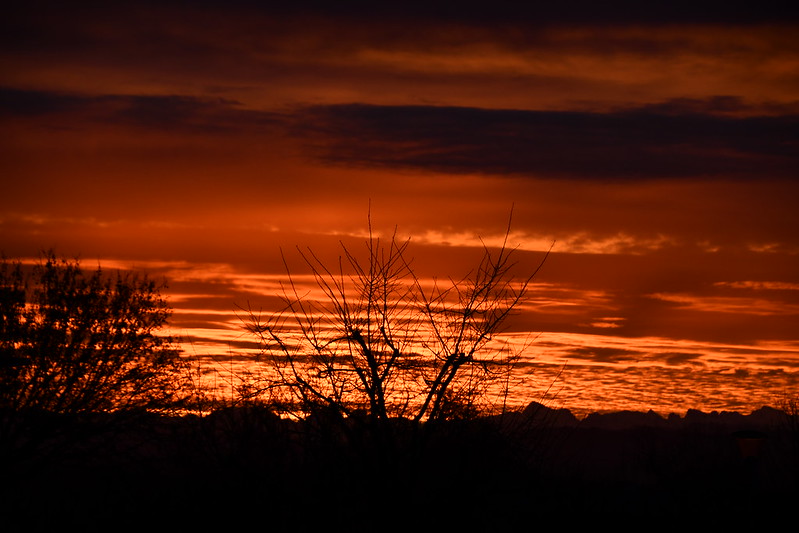 I decided to stay with the clouds.

The sun has returned in time for the morning. It is certainly uplifting to see it in these difficult times. It even gets quite warm during the day. Yesterday was again a day of shopping and what did I see: empty shelves, especially around the fresh articles. I wanted to buy a salad, just a simple so-called ice berg to go with my spaghetti dinner and there was not one single salad there. It looked as it the toilet roll syndrome  had appeared and had now infected the salad. There was one packet containing three chicory heads, but not my idea of a salad, and also too expensive. Why pay 2.50 Swiss francs when an ice berg costs around 1.60 francs. I decided almost on the chicory as a last resort and then I saw plastic packs with ready cut and washed mix salad. It is not something that I usually buy as I like to prepare my salad fresh and not in a plastic bag. However, it was on special offer and so I decided salad from the plastic bag is better than nothing and gives less to do.

I moved onto the butcher’s counter, at least there would be meat. I wanted minced beef and there was none. No problem, said the assistant, the butcher is preparing it. And so I got freshly minced beef straight from the machine. I asked her if they had a panic buying invasion in the morning and she said not really, but the lorry had not yet arrived with the day’s deliveries. It was the half past three in the afternoon, so I was wondering if he would ever arrive. Anyhow I got my minced beef, double the amount as usual, but I am planning to freeze half of it when cooked Italian style, to have something as a reserve in the freezer. I never used to bother with such things, but times are changing and I sometimes do not know where they are going.  A funny thought as we are in surreal times, I do not remember ever seeing the crew of the spaceship Enterprise eating anything. Did they live on vitamin tablets? Perhaps that will one day be our future, they never washed their hands either.

I am not so sure about this washing hands thing. I no longer have such light pink silky skin, but it is quite rough in places: too much liquid soap probably. Mr. Swiss told me yesterday I have quite a nice brown shading on my face. That is suspicious, although admittedly I do sit outside during the afternoon. I just do not trust the hairy peas with their genetic features.

As I no longer go on photography safaris so much, I am really running out of subjects for something new in the camera. The best I can do is our wild meadow, just opposite my garden.This photo is really a buttercup and daisy theme and reminds me of a poem from the days gone bye. I will not reproduce it here, but you will find it somewhere in Internet.

The dandelions are now finishing and producing their clocks of disposable seeds, ready to take over again for a second flower showing, or perhaps just waiting for next year.

I am glad to again be in isolation for the day. I cannot understand why everyone seems to be make a thing of pasttimes when they have to stay at home. I never seem to be lost for anything to do. I had to park my car yesterday evening on our parking spaces outside as today is the day when the underground garage must be emptied as it will be washed down with the hose. When I arrived home yesterday from shopping I was lucky to find the last remaining free space on our parking spaces, otherwise I would have had to park it on the black gravel spaces, which are not official and not so well organised. Today the process will be finished in the afternoon and I can move the car back into the garage. I was thinking of depositing my empty glass bottles and jars, and the metal from various kitchen tins in the village container area with No. 1 son this afternoon, but am not sure about that one. I could do it just before moving back to the garage.

Otherwise I must now continue with my isolation hobby. Today it will be new bed linen. I have already removed the old from my bed and recovered the duvet and cushion with fresh linen and I noticed Mr. Swiss sitting on his bed doing the same. All going well it will be done in half an hour.

Keep yourselves busy with isolation hobbies and to pass time you can always write about it afterwards on the computer. As a goodbye here is the view from my front garden of our local Jura mountains (I zoomed it in a little).