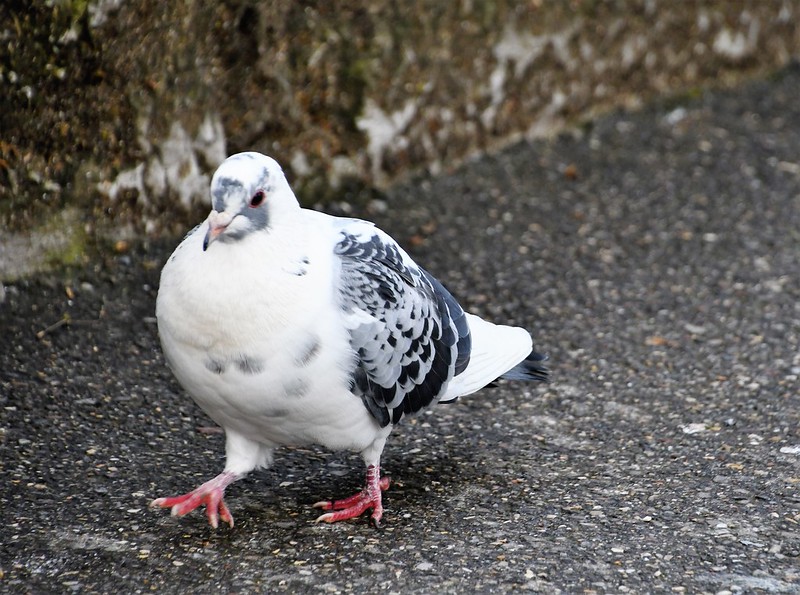 This one seems to be marching into February 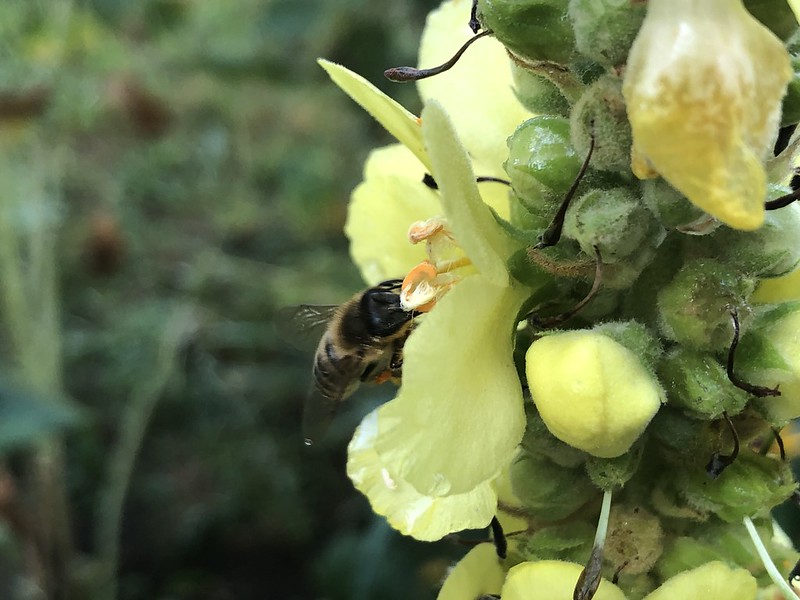 I seems to have a visitor 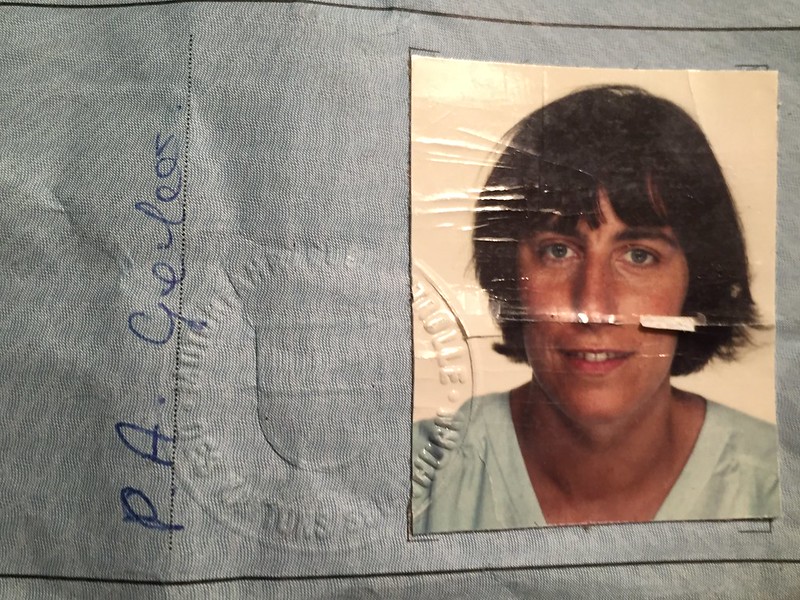 This is my driving licence showing a younger me at the age of 36 years. It was issued when I passed my test. I was not really a young driver, but realised that having four children to move around, working as a housewife and an export clerk in a company, all simultaneously, I had to get mobile. Depending on public transport and otherwise walking everywhere was becoming a little exhausting and after approximately 90 driving lessons I took the test and passed first time which was a surprise for everyone concerned including my driving instructor probably.

I was proud to get this licence and have had it in my purse since that day, carrying it everywhere with me. It was paper, and naturally has got a little crumpled and frayed at the edges in the meanwhile, but it is still my official permit, that is until the end of 2023, meaning I still have three years to change it to a plastic credit card similar permit. I am one of the remaining 29,000 owners of the old paper version in Switzerland.

How can they do this? Change the law to force you to stop using an environmental friendly material and transfer to plastic material, which we should all now be reducing. I will hold out to the last minute and some time in December 2023, with a tear in my eye I will exchange this reminder of the good old days to something plastic. I will probably become one of the last in Switzerland to do it.

It seems to have been moving to Spring all through the Winter that never was. We had one day of snow, cold temperatures, but it was bearable. Was it only yesterday that I was on the search for Autumn leaves falling, turning to shades of brown and red and now I search for signs of Spring. I even found a couple in my garden.

The snowdrops have been around for a couple of days and now the flowers are opening. They are looking a little bedraggled because it was raining.

Surely that cannot be all, no it is not. I have signs of daffodils, but only the leaves up to now. 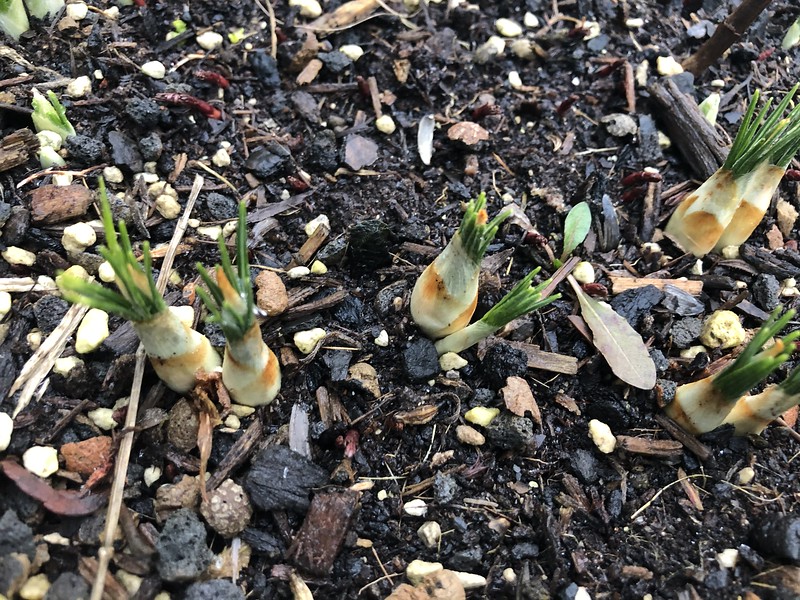 And where there are daffodils there must be crocus. Yes they are also poking through the surface. The season is rescued, Spring is on its way, although taking its time. 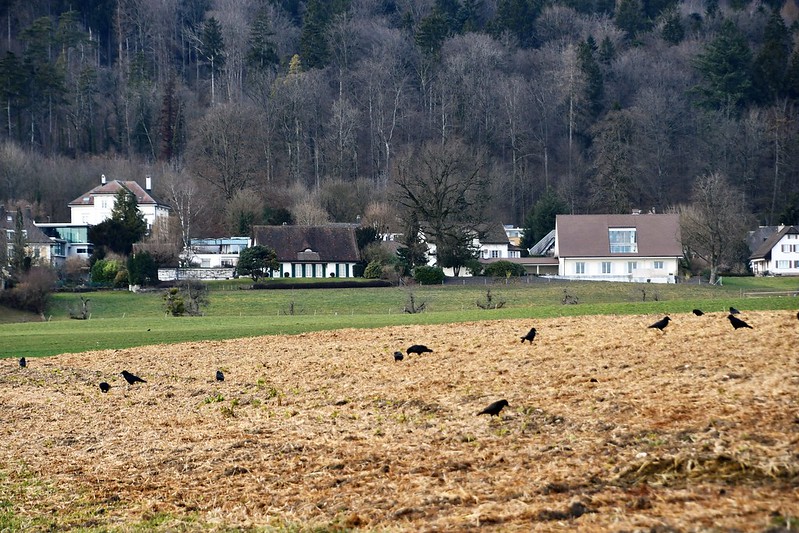 If the farmer begins to plough the fields, then Spring must be in the air, or in the earth. 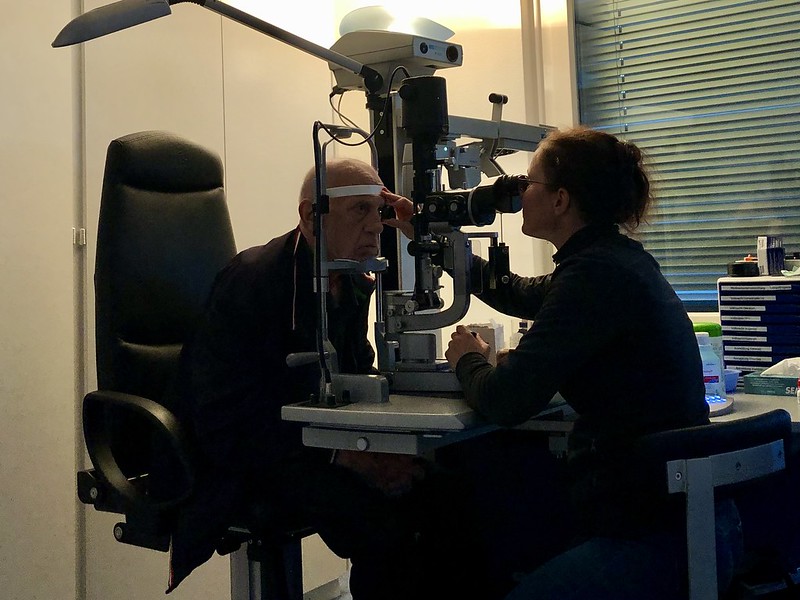 Always look on the bright side of life, especially after you get new eyes. There were two operations, each eye was replaced, but eventually he could see clearly again. 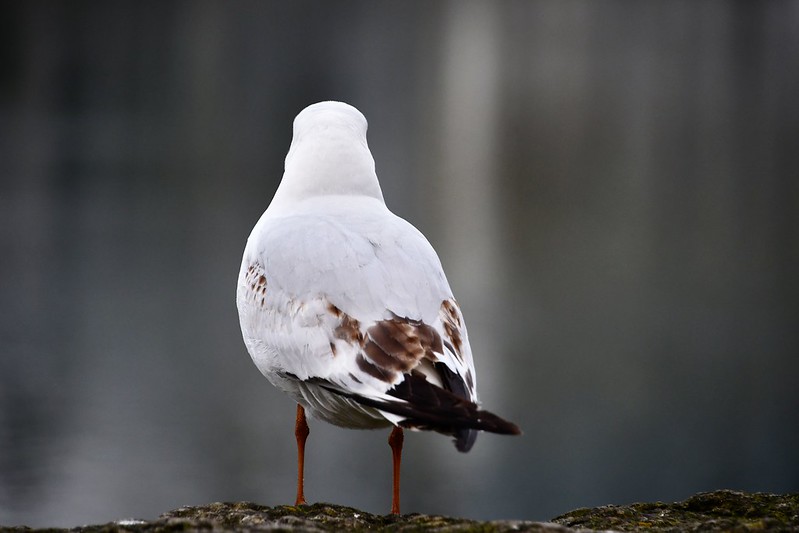 This gull is saying goodbye it seems. 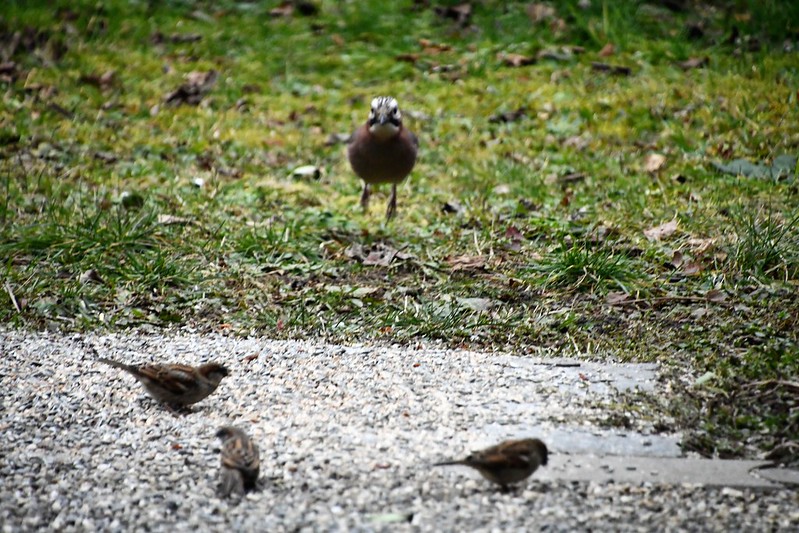 Big brother is watching you

A bit of a strange morning this morning: very misty, but there were a few contours above and a brighter light to show that the sun would eventually arrive. It is cold outside, but if the day develops as yesterday, it will warm up when the afternoon arrives. As it is Saturday I now do what I want to do, although  I am still deciding what to do. Although I live in a great place, surrounded by nature, I would still like to go places with my camera that I have not been to – yet. Yesterday I completed my week-end shopping. I had a wonderful experience when I was finished with the shopping and arrived at my car with a load for the boot, four full bags plus 6 large bottles of cola to lift into the boot. There were two ladies talking next to my car and they immediately sprang into action and told me to leave my shopping in the trolley, and they lifted it all and put it into the boot of the car. Not only that but one of the ladies said to leave the trolley, she would take it to the trolley station which was at the end of the parking row. She brought me my coin afterwards from the trolley and I was so glad. It saved me a lot of trouble with walking back and forth, the last trip being only with my stick after depositing the trolley. I have noticed since being somewhat handicapped that there are still good spirits in this world. 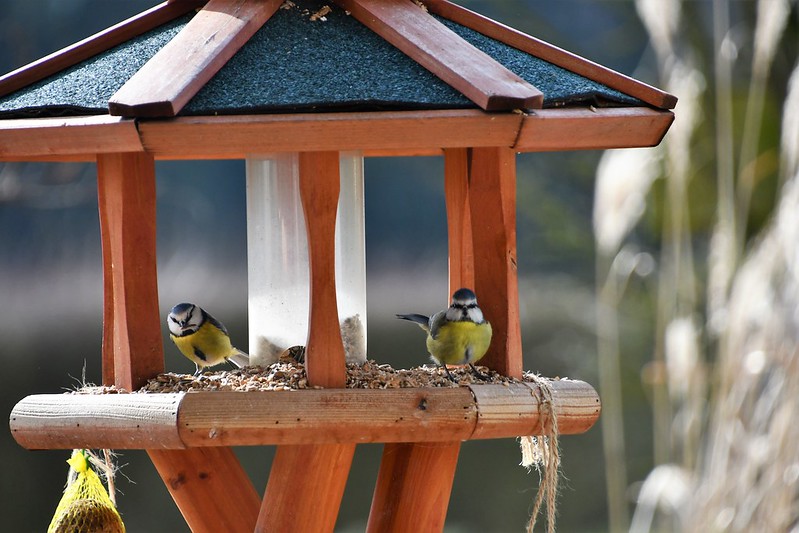 It seemed to my bird house was no longer being visited so much, the birds preferring to peck from the seeds I lay on the ground. I decided to shift it to opposite my kitchen windows where I have it more in view and I realised that it is still being visited by the tits who seem to prefer to peck at the higher level. They are very quick and have a quick hop from a near tree to the platform. Take a seed or two and return to the tree where they can eat it in peace without interruptions from the other birds. 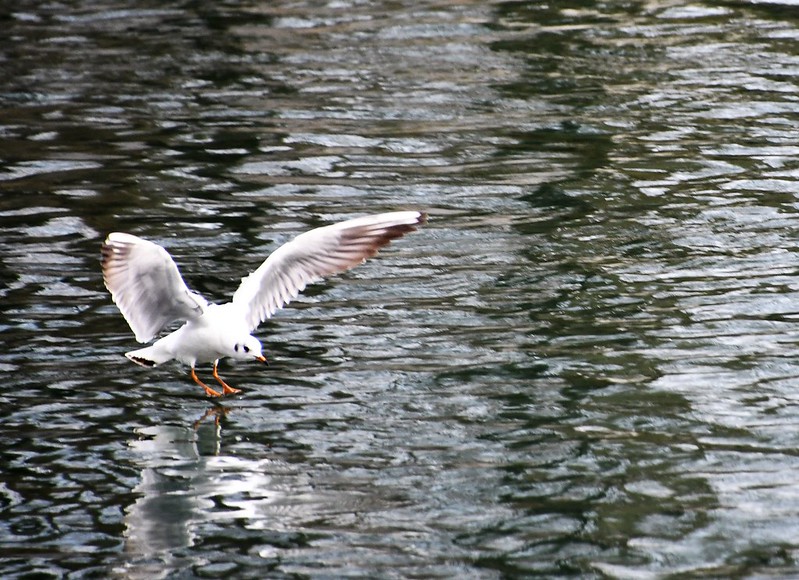 The gulls in town are not so fussy and seem to be permanently in flight searching for food  I think it is he only reason they arrive inland during the Winter. This one was preparing for a safe landing on water. 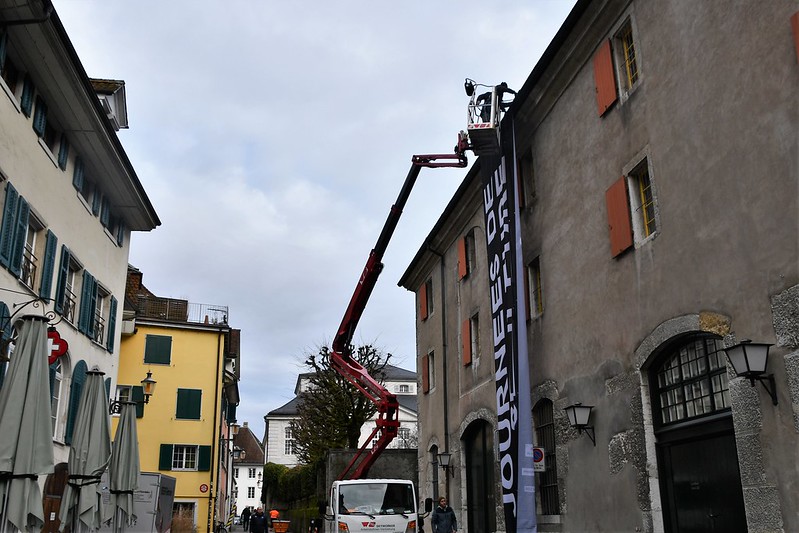 I also noticed on my last trip to town that the decorations left from our annual film festival were being removed. There is always something going on in Solothurn, and it always begins with the film festival at the beginning of the year. Now and again we might even have the visit from a well known film actor, although the last one I remember was Maximillian Schell a few years ago. In the meanwhile he too has passed on. This year the only prominent visitor was one of our cabinet ministers.

The next festival will be the literature days where the film makers are replaced by authors and writers.

And so to the daily events. Wishing everyone what I wish myself for the week-end, peace and relaxation and no stress. 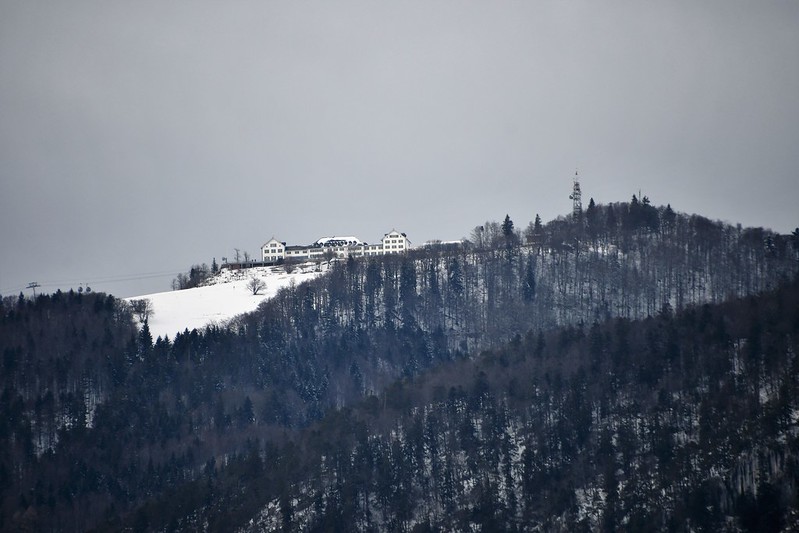