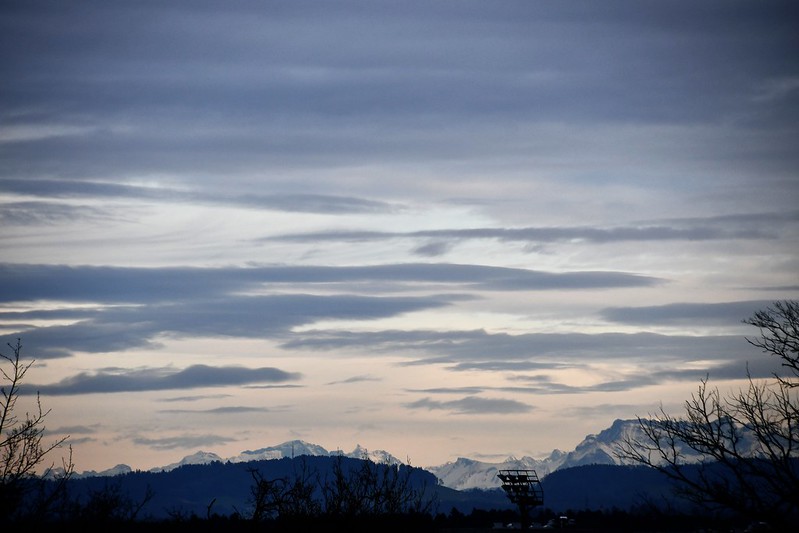 I decided to omit a photo of this morning’s sky, because it is not a sky, just something plain and grey. It is raining and cold and very very boring. Instead I show a photo from yesterday afternoon when I again broke loose to conquer my world, be it only with a camera. This was the first photo I took as I was leaving our estate with a distant view of the Bernese Alps and a wonderful sky to match it. Not too many clouds, but  enough to paint a picture. The sun broke through yesterday morning, but only in the afternoon did it succeed in staying for a while. As I was wheeling home in my chair I suddenly felt something dropping onto my jacket. It had even begun to rain, although I was nearly home so no danger was done. It is particularly irritating when you are wheeling along in an open chair as you have no great protection. 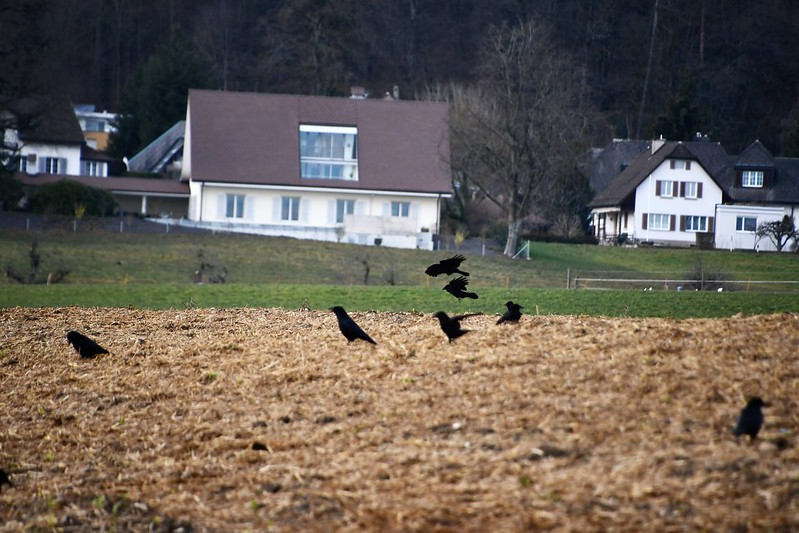 The first thing I saw on my journey as I wheeled along the main road were these crows opposite. The farmer had ploughed up the field and they had arrived to take a peck at what lay beneath the earth. 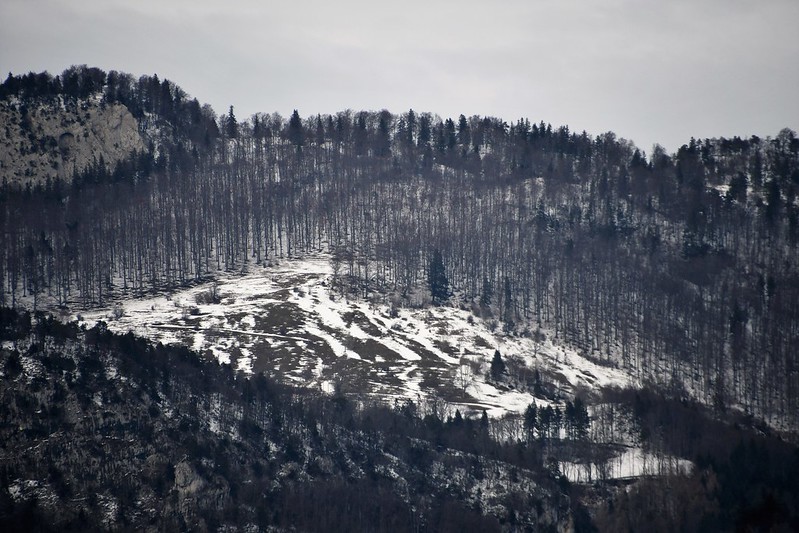 As I looked up at the Jura mountains in the background I noticed that snow had fallen on the higher slopes. We have had very little snow this year and in the lower lands where our village is, had only one day of snow on 13th December. I know the date as I took a few photos of it which are now a reminder that it did actually snow once. On the one hand I am glad that we had no snow, it makes it easier to drive on the roads, on the other hand it is not so normal and I am not sure what our nature gods will do with less snow. The strange thing is that we have had quite a cold Winter without the snow. And now we are told that temperatures will be over 10° C this week-end, almost Spring. 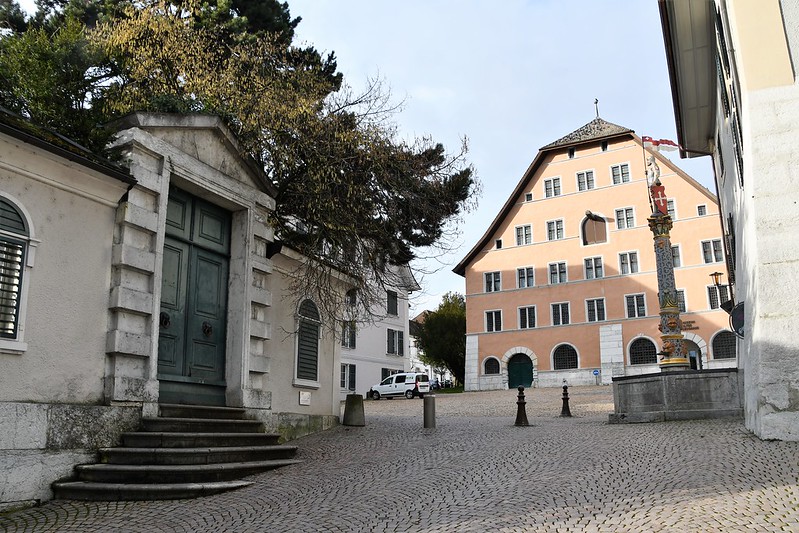 I eventually arrived in town and wheeled past our old arsenal building. It is the one where they cover the windows at Christmas with Christmas Calendar pictures. The steps on the left lead to an older house that was built by a wealthy industrial family sometime in the 17th-18th centuary. It is said that Casanova once spent some time in the house on a visit to our town, getting to know Lady von Roll a little better, although whether it is the truth or legend is not certain. 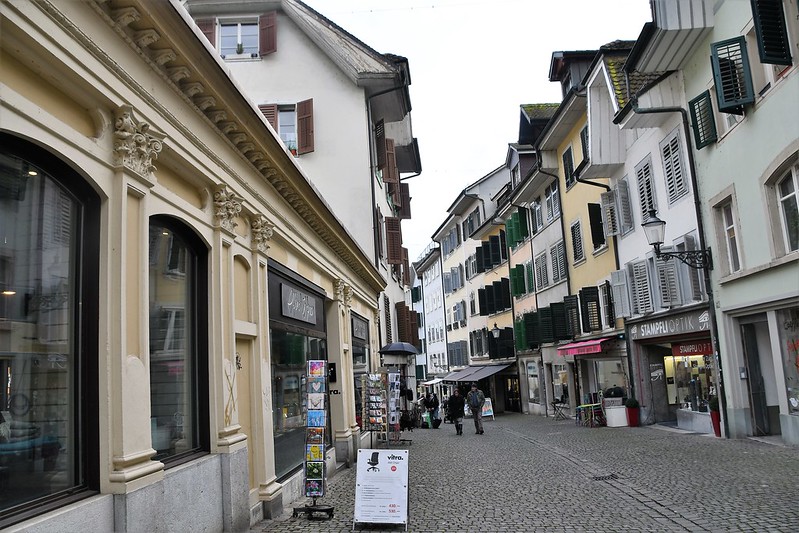 There were not many people in town and the small side streets were quite empty, but all the more you can capture their quaint beauty. Very little has changed in this town over the years and the houses are protected in their form.  The high rise modern part of town is more on the edge out of the way of the natural beauty of the central part. 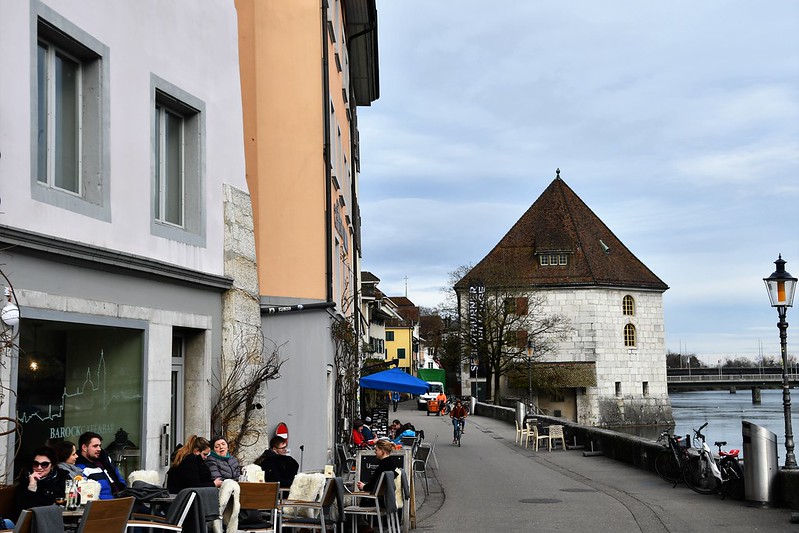 I also noticed that our usually crowded restaurant mile on the Landhaus Quay had less visitors than usual, but it was a weekday and the working population were busy with other chores. For the golden oldies it was also a little cold.

Eventually I wheeled on home. I did not want to stay too long, as I had other things to do at home. However, what would be a visit to town in Winter without taking some memorable photos of our gull population who seem to outnumber the humans at the moment. 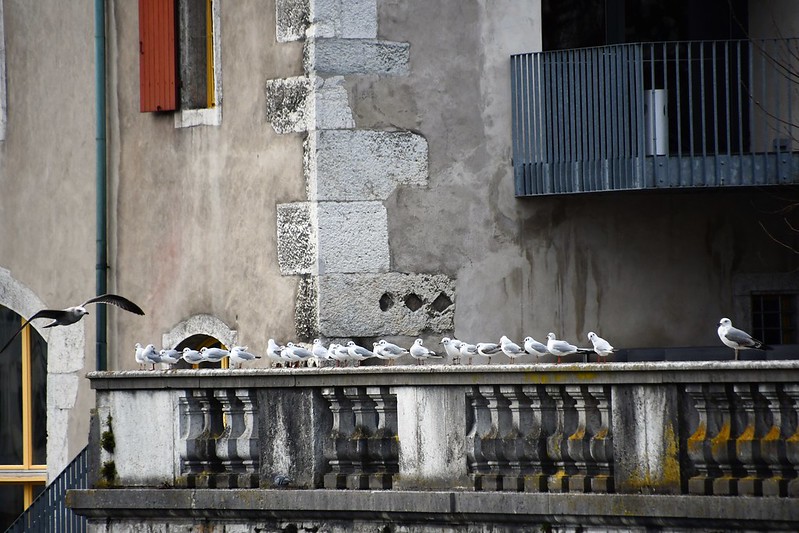 And now to turn my thoughts to the day ahead. Yet again it is week-end shopping afternoon and I have been busy planning the food requirements. As soon as Monday arrives, it seems to be Friday again. I have no extra chores today and I am hoping for a stressless day, as probably most of you are. I am off now, so enjoy the day, it’s Friday and for the workers they now have a week-end in front. A big thank you for those that work at the week-end for the benefit of the rest of the population.