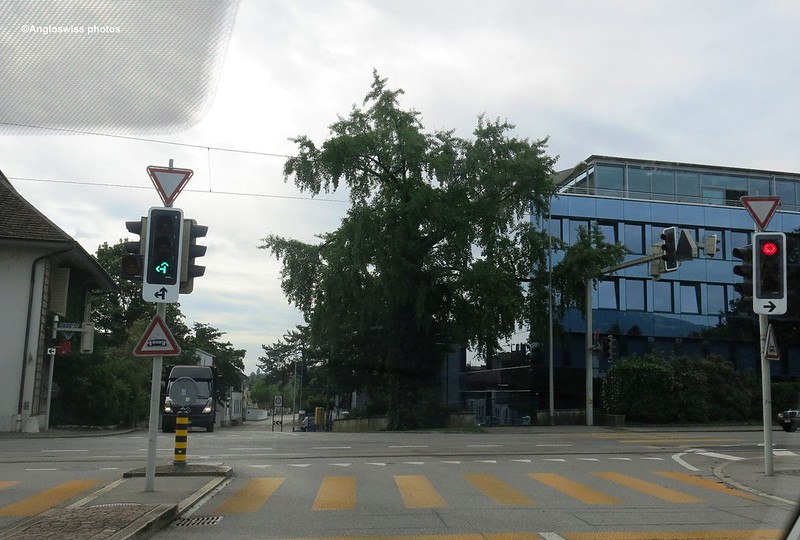 I was driving home from the supermarket this afternoon on my usual route. I know the streets by memory. Driving down this particular street in the photo with the traffic lights at the end was the street where I once lived for five years, so no problem. Of course it is now Winter and a dull day. However, the traffic light is still there. There is only a 30 kmh speed limit on this road, so a place to be very careful with the gas pedal. The light was red and I was the first car (and I think the only one) in front of the traffic light. What could go possibly wrong? I just had to wait for the light to change to green.

And now the difficult part is there. From the left there is a road with traffic that stop behind the white line to allow traffic from my side street to turn left. There is now a problem.  Two cars, not just one, had driven over their white waiting line and had stopped. They were almost blocking me from turning left. Are you with me? It is a bit difficult to describe this blundersome situation. Now I had green and should go, but where? Would I have enough room to turn left when one car was almost half way blocking my path from the left. For a golden oldie this was not an easy problem to solve. I decided to take the chance and did a sharp left turn hoping that luck would be with me. It was and I managed to complete my left turn and continue on the way home. Of course I shook my head as I passed the first car that was blocking my road, but to no avail. There was no driver in the car, the car was empty. I took a quick look in the second car behind the driverless car, and discovered there was a driver in it.

I still do not know what to make of this predicament. As I drove further along the road, which was now safe, I saw a police car parked on the right.

Someone blundered somewhere. Where was the missing driver and how could the queue of cars behind him drive further when he was blocking the road. I must have a look in the newspaper tomorrow.