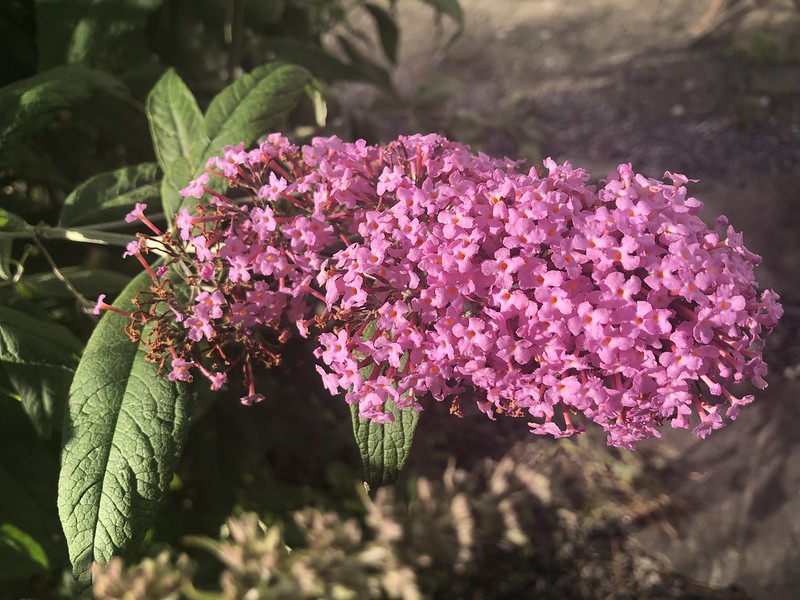 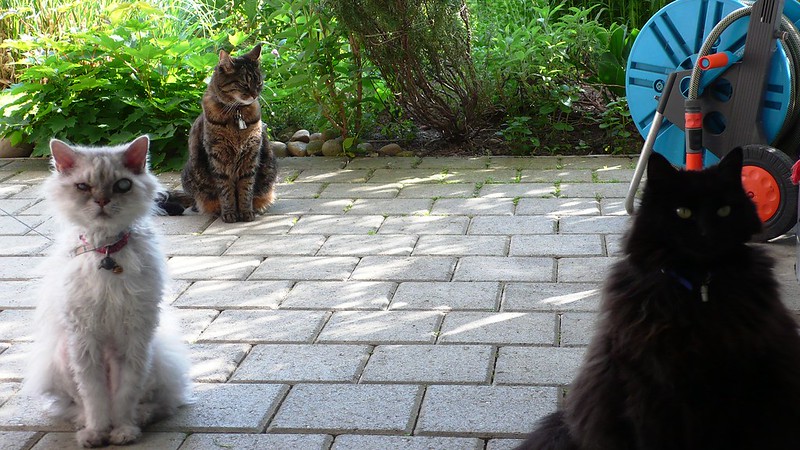 These were my three cats Tabby at the back, Fluffy my blind cat bottom left (a Selkirk Rex) and Nera bottom right, Tabby’s litter sister. I now only have Tabby. Fluffy and Nera are now living their tenth life in the eternal corn chambers removing the mice.

Yesterday I went for a wander through my half of the village. I was on my own it seemed until this cat appeared. I saw him and he saw me and we both stopped in our tracks. He looked at me, no stared at me, and waited for the next move. I decided to remain still, camera poised to see what he  would do next.

Keeping his eyes on me all the time, and not breaking contact, he began to approach, he seemed to have a definite target in his walk.

He turned as he got nearer. It was then that he began to avoid eye contact. I was waiting for him to retreat, but this cat was not prepared to give up.

And then he was having second thoughts. Perhaps this human in the chair with a camera in her hand was a source of rivalry. I remained still in my chair, ready to shift into top gear and escape from this urban tiger.

This was the last threatening glance he made before he turned and walked away from me. He decided that I was not edible and too big to win a fight with, but he kept his eyes on me all the time as he was leaving.

On my walk in the cold and mist, I continued to the river and found myself at the top of the bank looking down on a couple of swans. The cold and mist did not bother them and neither did the water. They were having fun, at least fun for a swan.

I suppose you could say killing two birds with one stone. I saw this garbage container yesterday, plastic of course, with the balloon decoration attached (also plastic). It was being used as a signal at the front entrance to a house to show where the celebrations were being held: probably a children’s birthday party.

It is not getting any better. Since almost a week we have been covered with a solid cloud above. I have not seen the sun for a few days. Is this the armageddon that everyone is talking about, I hope not.

Undaunted I decided to find some fodder for my camera yesterday afternoon. It was cold, unfriendly and again all outlines were somewhat blunt. I seemed to be the only person going anywhere in the village, or almost. 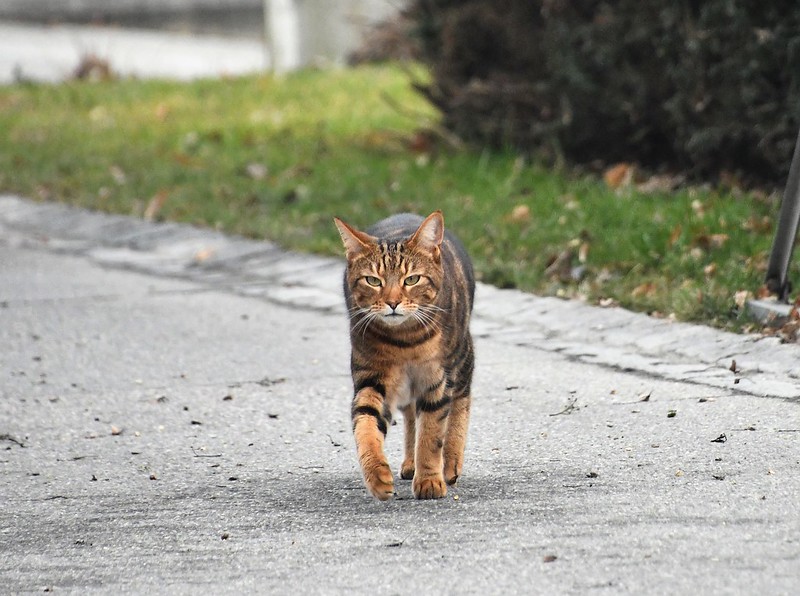 This feline suddenly appeared. When he or she saw me with the camera it immediately changed direction. Eventually it decided that I was not a threat to its territory, nor did I have any food and so it walked past. I recognised it as belonging to one of the neighbours and now and again pays a visit in our garden for a water sample from my cat’s bowl in my garden. It’s a tabby cat with a difference and has most distinct markings on its body. 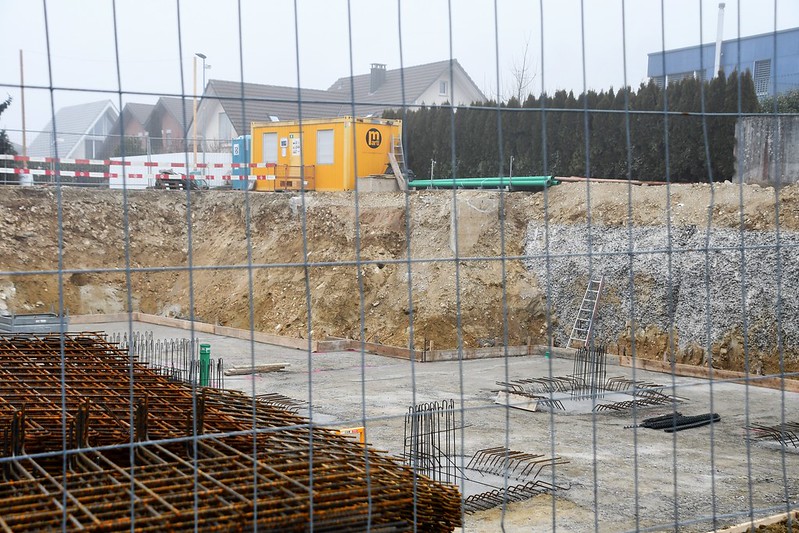 Further on my quest for something completely different I discovered that they were building again in our village. It is a rural village, surrounded by farmland, but now and again there is a space amongst the inhabitants which can be developed for more inhabitants.  I found two such areas, but not for houses, more apartment blocks. The modern trend is for senior living space, so the age average is being raised. Most of the families with younger children are gradually moving out and we golden oldies are being left to ourselves. 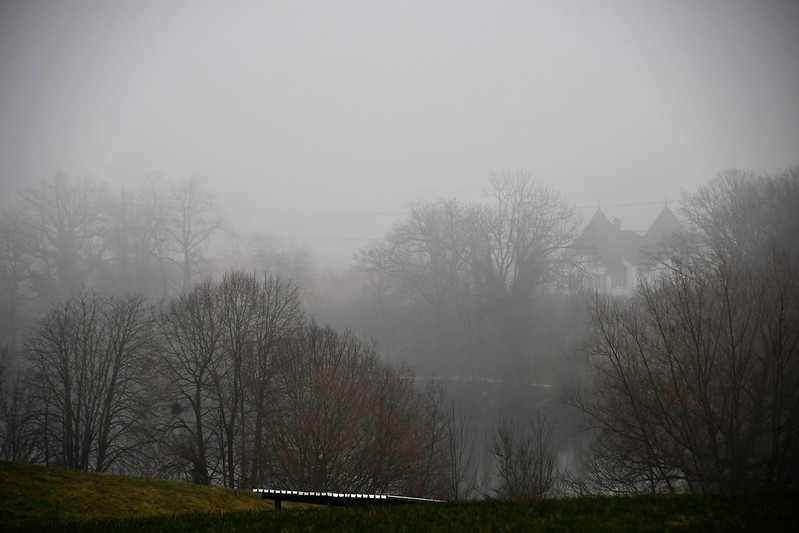 This was the general view I had from the village, it would have made an ideal background scenery for a supernatural film. Now and again a car would pass by, but just single appearances usually leaving or arriving at their homes. We are not so interesting for sightseeing. 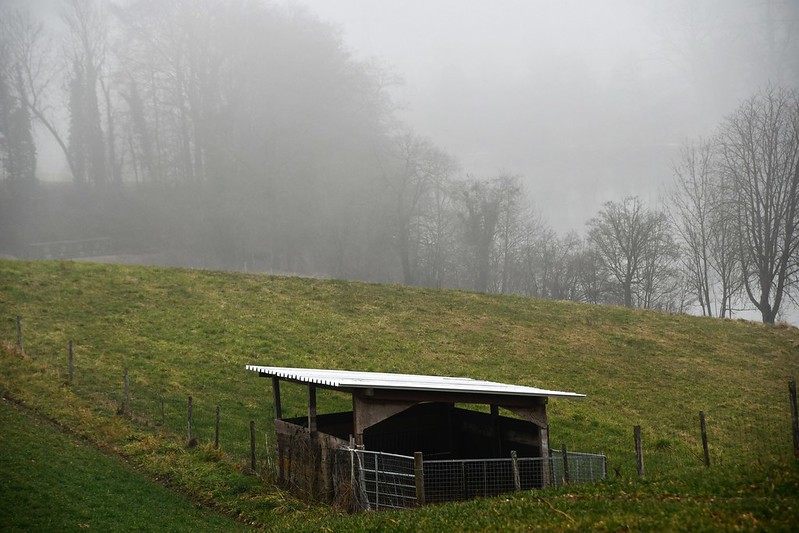 The sheep pen was also abandoned waiting for the next arrivals in Spring. This was the sort of weather that makes you long for the winter to be gone. It was really bitter cold, although I was warmly dressed. When you travel by wheelchair there is not much chance of mobility to keep you warm. It is the only time that I actually wear gloves.

I decided it was time to return to the warmth of my home, but at least I had escaped to the great outdoors. It was an interesting experience to roam around alone, and I really felt like the last survivor, although one man crossed my path taking his dog for a walk.

And now onto the Sunday routine. Every day seems to have its own theme. At least it is stressless and I can please myself what I do.  I might even go for another wheelie in my chair this afternoon to break down the boredom, but this time in a more lively place. I really had the feeling I was approaching the river on my way to meet Hades yesterday, surrounded by gloom. 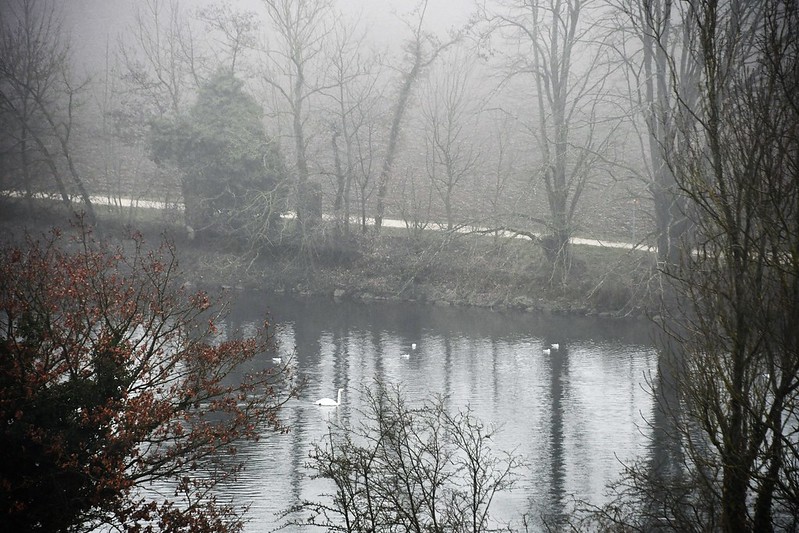 However I only got as far as the top of the river bank looking down on it all and decided to postpone my visit to Hades. He can wait a few more years.

So let us hope that in your part of the world there is daylight, perhaps even the suns rays are breaking through. Look after yourselves, I will be back later.