It looked quite good when I stopped hugging the bed, but the sun has only now discarded the cloud cover three hours later. I must admit I am also not so fast to rise in the morning: otherwise very cold, but no rain.

Today is cleaning lady day and she has been busy in my kitchen, has now progressed to the bathroom and the grand finale will be the shower. I must admit, I am so thankful for what she does. Admittedly she is paid, but she invests care and responsibility. I was talking to her this morning about her country of origin which is Columbia. It was an interesting discussion and it seems that Columbia is doing OK, but they also have their problems. It began with cooking food, of course. When two women discuss it often begins with food. She said that Columbia has plenty of meat, and a good choice of grain, the Andes being an important region for supplies. She cooks Columbian and Swiss. A big problem in Columbia are the immigrants they have, mainly from Venezuela. It sounded similar to our European problems with immigrants entering from the poorer countries hoping to make a better living. Otherwise economically Columbia is doing well.

I had a nice little surprise one morning this week when I saw a flash of red outside and a robin was perched on one of my raised beds. I love these little birds, but they are really the loners of the bird world. I never see them together with other birds, but only alone. 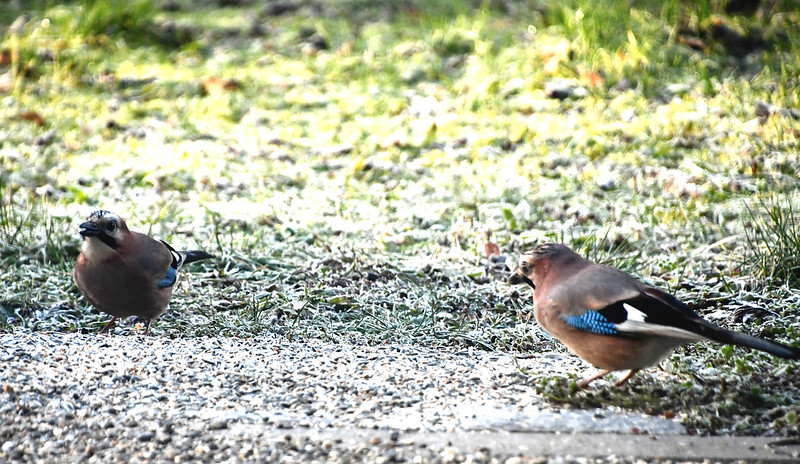 My jays are now becoming regular visitors and they arrive every morning for breakfast. At first there was only one, but now I notice it is a pair. I have no idea who the lady is or the man, but I am looking forward to marital bliss in Spring if they begin raising a family. They also keep themselves separate from the others and sit in the trees watching until the coast is clear. No-one wants a crow or magpie disturbance when collecting food.

Yesterday I was on a shopping trip and apart from a package of Pepsi Cola it was a nice compact shopping tour. It certainly makes it easier when you have a detailed shopping list: one of the advantages of being a cyber housewife. My Iphone accompanies me all day and when something comes to my mind that I must buy, I jot it quickly on the list. When I eventually go shopping everything is nicely organised. Our chemist is also well organised. If Mr. Swiss needs something I can just call in the morning to ask if they have it. If not they order it from the local supplier and it is delivered in the afternoon. I can then pick it up after shopping at the store as the drug store is in the same complex. It certainly pays off to be organised.

Today I have an extra tour to the doc with Mr. Swiss. I will drop him off, return home and he will call me when he is finished. It saves me time and the bother of driving into the parking silo.

And now to move on to better things, like finishing cooking the lunch. Enjoy the day, have fun, or just make the most of it. See you around later.

And enjoy your meals, like this horse I met on my trip to the farm.