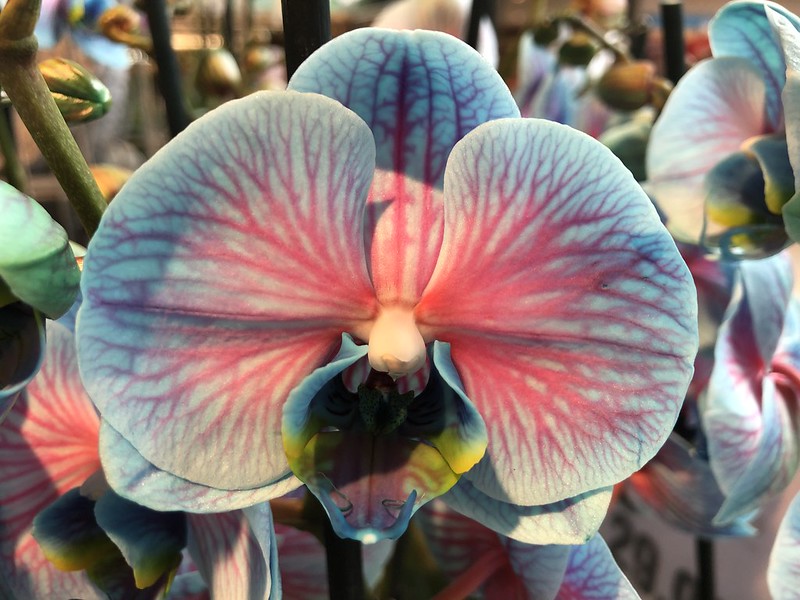 An orchid with a difference. I know I brought this once before some time last year, but it is really something unique. Whether you like it is a matter of taste. I find it quite amusing. 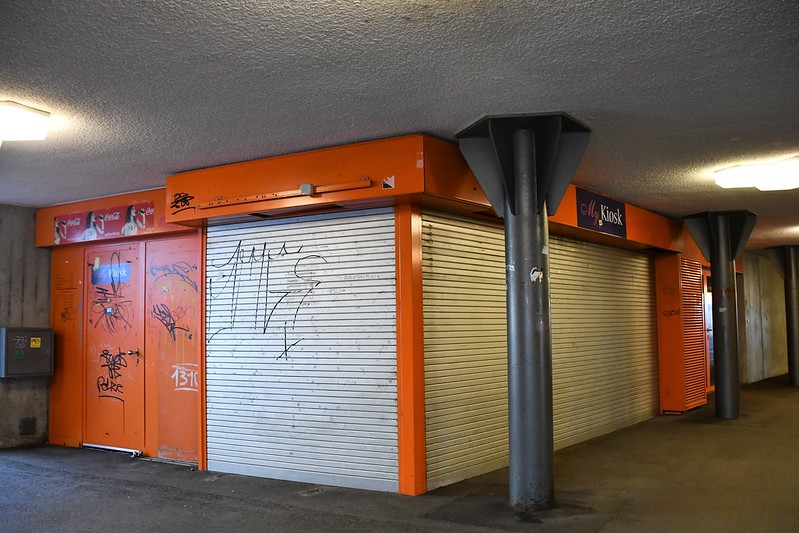 This is in the underground path to town. It enables you to avoid the traffic when crossing the road. What is this egregious buiding. Yes, I used the word, but am still not sure whether correctly.  I even consulted the german meaning, and I must honestly say it made more sense. The word “ungeheuer” means more to me than egregious. I think I have been away too long from my english surroundings.

I am drifting. What is this desolate building in an underground path. Its original purpose was a kiosk. You could buy newspapers, your lotto tickets, and magazines. There was even the opportunity to buy sweets. This must now be at least 20 years ago, although I believe more. It was closed as it probably was not showing any profit. It has not been used since. I often wonder what it looks like behind the closed blinds. Perhaps it is now used as prison cells for criminals. The blinds have not been moved for the last 20 years.  If you ascend the slope to the world above,  the local police station is the first building you see. Ungeheuer isn’t it? 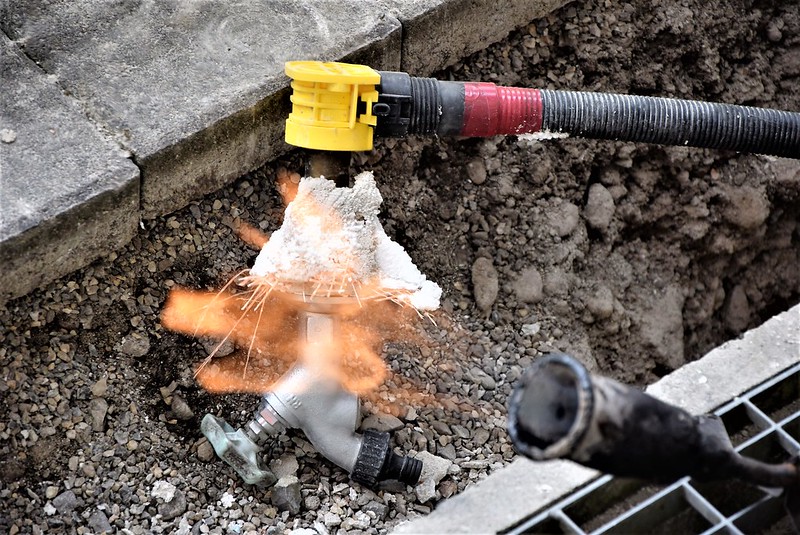 3 years ago our apartment building was being torched now and again. They renovated everything and it was often fire and flames. What a wonderful opportunity for a few photos. 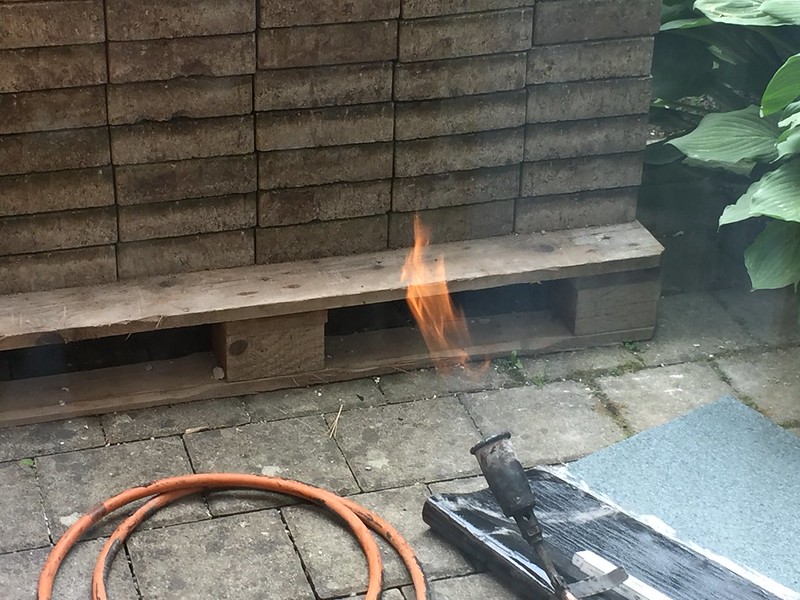 Not being from the trade, I was not really sure what they were torching. 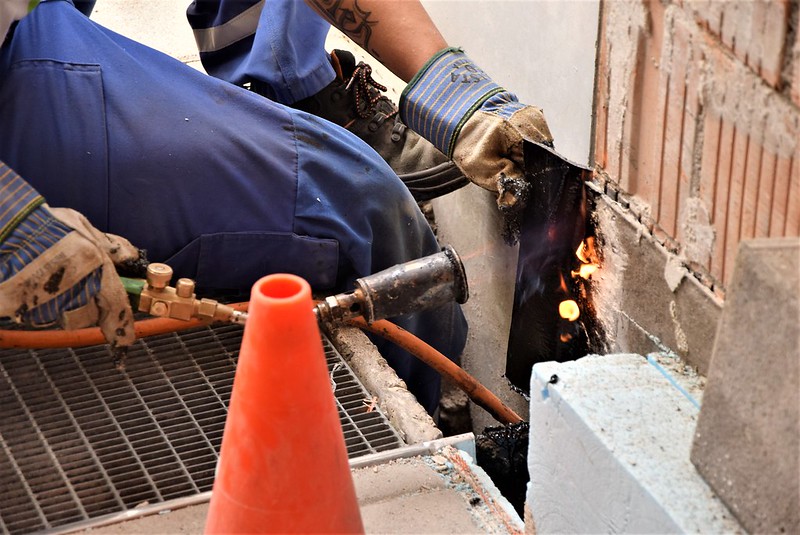 It often got quite exciting, especially when the sparks were flying. 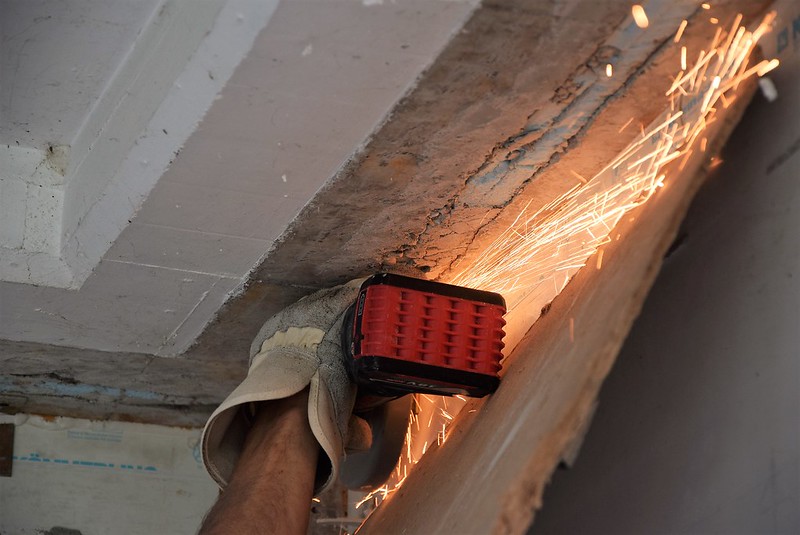 I remember when the guy did this bit of work, he told me to stand back otherwise it could be that some sparks might land on the lens of my camera: one of the problems of being an “on the spot” reporter. When they eventually left after 7 months I had over one thousand photos in my files of the work progress.

At the time I just took shots now and again, but I am glad. I now have many memories to reflect on of when they torched the building. 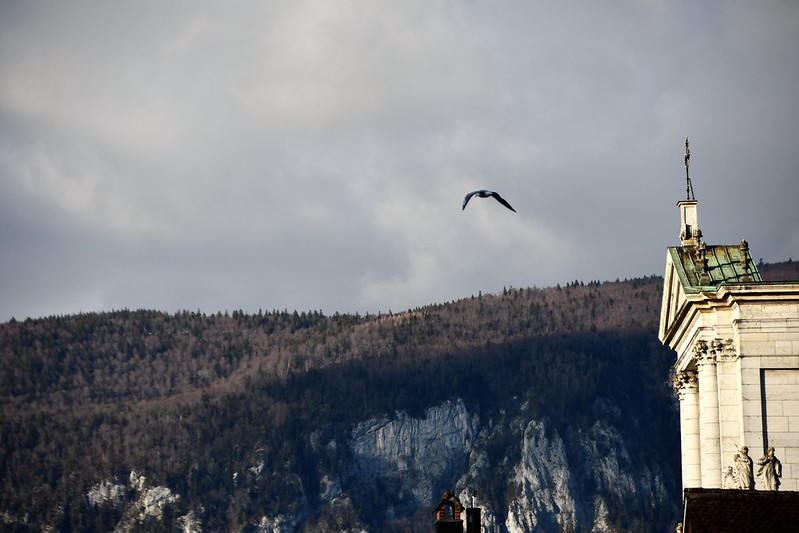 Here I have  a bit of everything. A view of the Jura mountain, a gull winging its way and a corner of our St. Urs cathedral in the town of Solothurn, Switzerland. 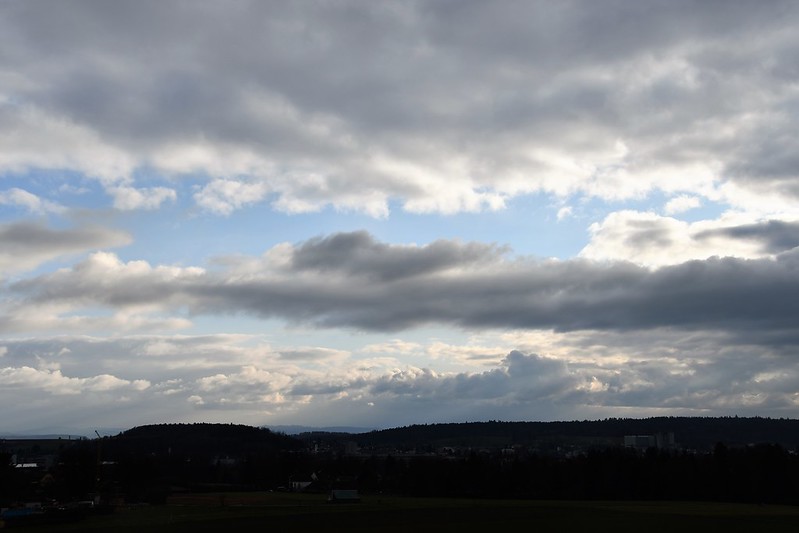 The day begins with a freezing cold morning, no sun and a few clouds, although this photo is from yesterday afternoon when I went for a wheelie in my chair. The weather report had then already predicted we will be having the coldest night in the year, and it definitely was. The strange thing was there was no ground frost and the grass did not have the usual white surface from the ice. 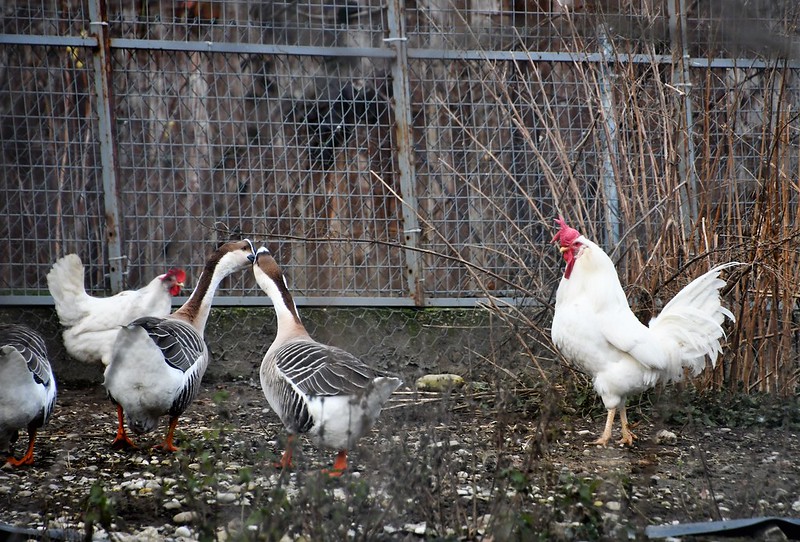 Yesterday afternoon I made my way to the local stables with attached chicken run to see how life was going for them all. I heard the animals before I saw them. The geese were having quite a loud conversation and the chickens were joining in. I think this is the rooster in the photo. 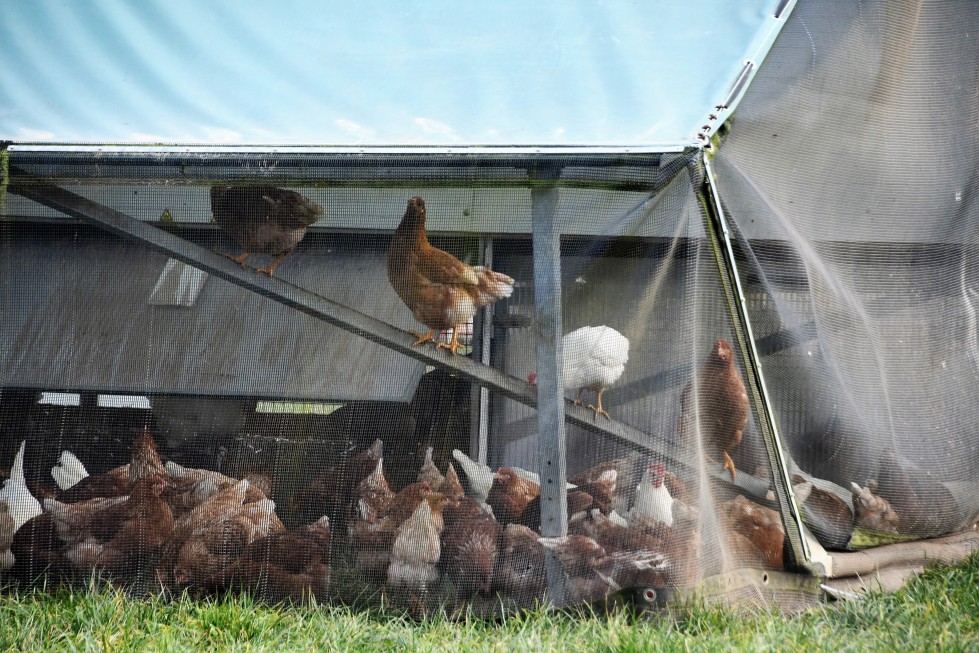 They have shifted the chicken coop in its movable house to another place, but they are not yet let out to examine the surroundings. Perhaps it is too cold for them and I think these are the egg layers. There is  a second chicken house where they are running free. 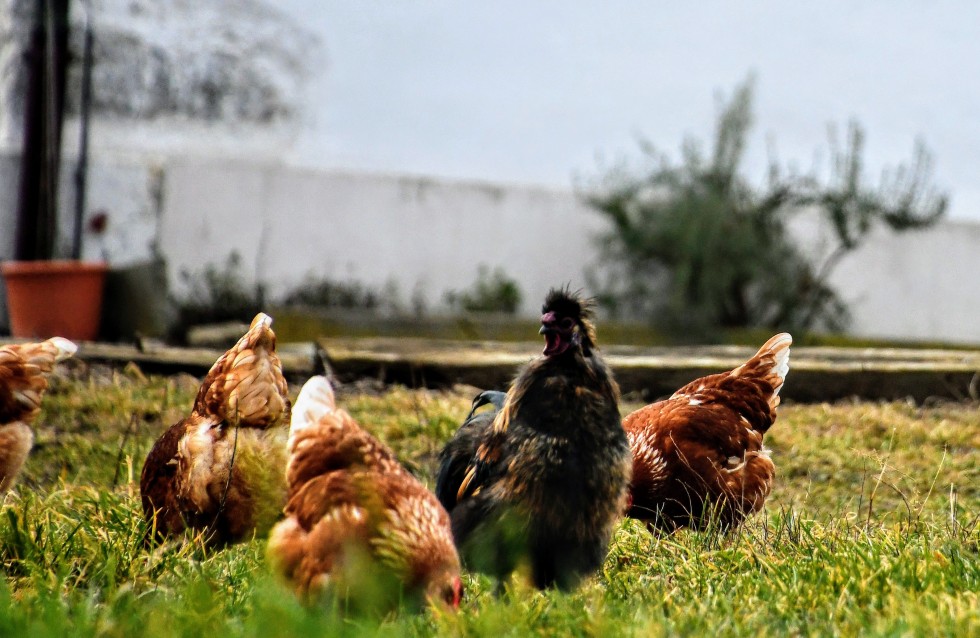 I find chickens are fascinating creatures. Probably another symptom of growing up in a town as big as London. The only chickens I ever saw when I lived there were on a plate for a meal although our neighbours did have chickens in their back garden when I was a kid, but mainly for their own food I believe. 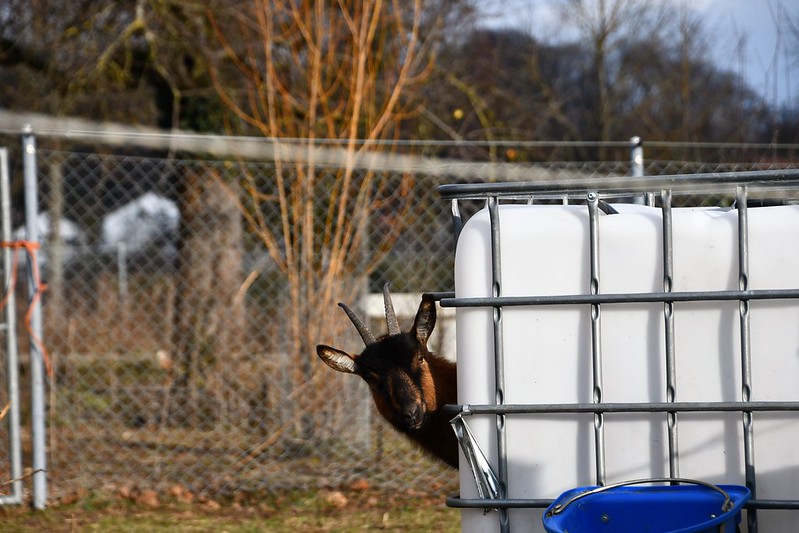 I wheeled on and noticed I was being watched. The kid goat was getting inquisitive. His mum was not far away. 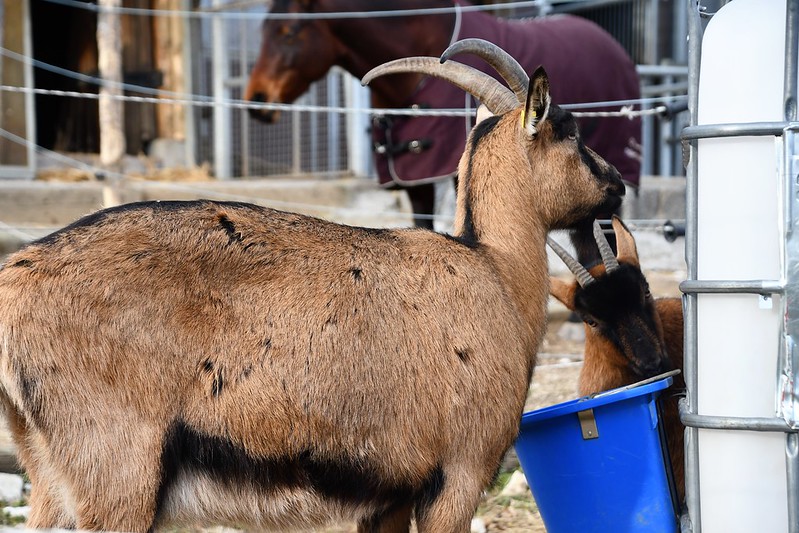 Otherwise it was a usual Sunday with nothing special happening and I was already home after an hour’s tour. It was quite cold and dreary. The sun decided to stay behind the clouds. 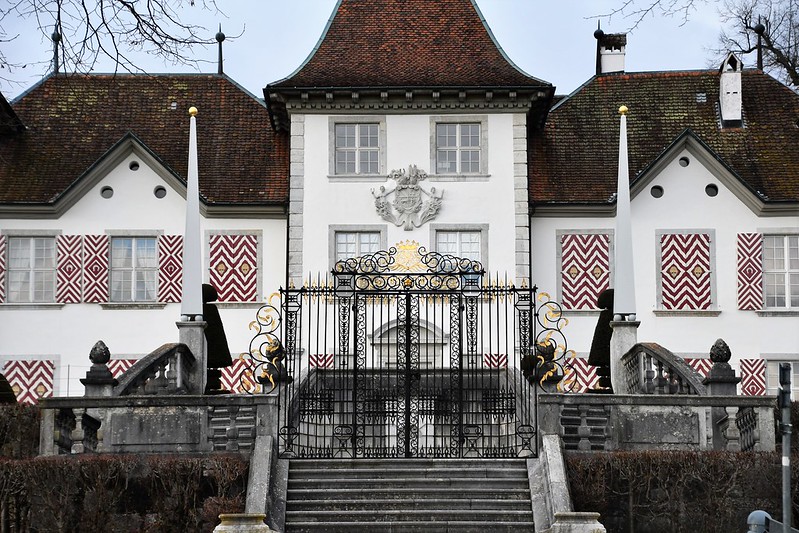 The stables are in the surrounding grounds of the local castle Waldegg, so I stopped past for a photo of the main entrance, although it is rarely used.  I think it is just there for the show of it, you generally enter on the other side. It was looking quite colourful as some of the shutters were closed. It used to be inhabited by the von Sury family, one of which was serving in the Swiss guard in the Vatican, but that was many years ago. It now belongs to the Kanton of Solothurn.

Today is again Monday, so time to go shopping again, but that will be this afternoon. I also have to make a call at the chemists for a few items.

And now to the daily chores: a little clean up of the apartment and I have a lunch to cook. 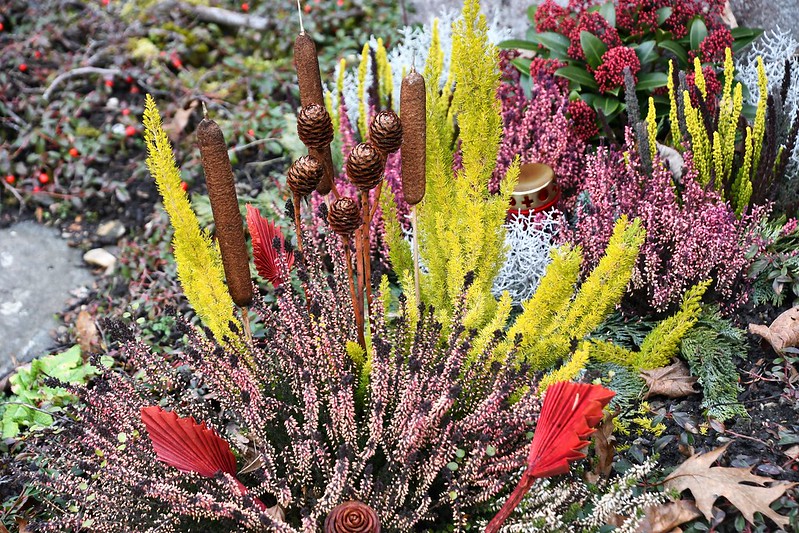 On my journey I take a short cut through the cemetery and saw this bright display on one of the graves. Even Winter has its colourful side.