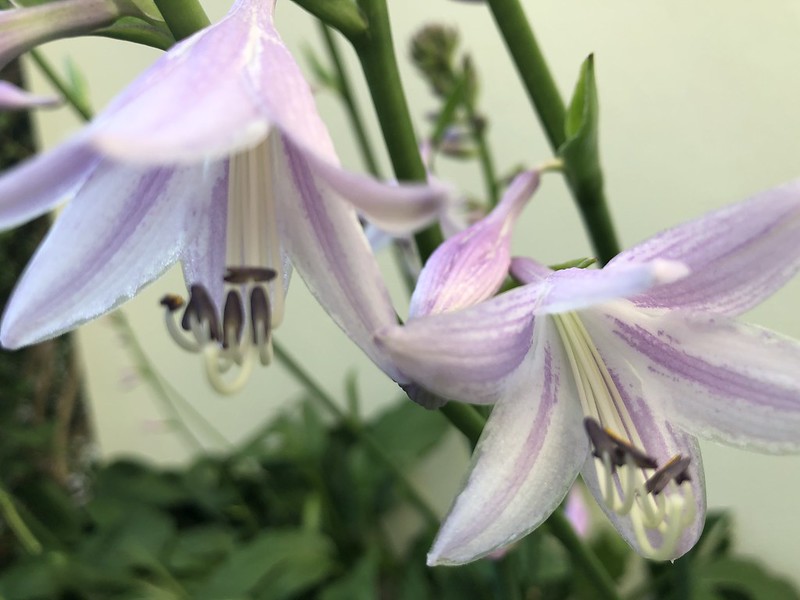 Not only very nice big leaves, but also flowers. 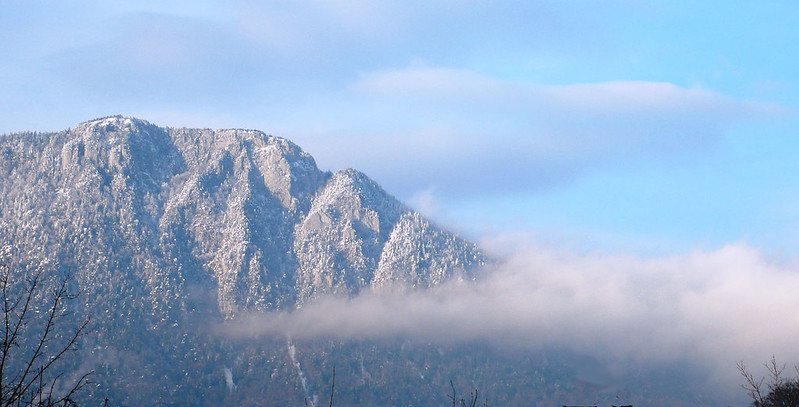 I am slowly suffocating down here beneath the cloud cover. At first we had a week of rain, which has now disappeared, and now everything is covered with a lid of grey. Today the sun appeared, for two minutes, we even had some clouds. This photo was taken some time ago, when our weather was normal.

I had to have a little chuckle when I read that everyone is suffering from the withdrawal of fresh air and sunny days. What do you do to overcome this state of affairs? Being in Switzerland we have the wonderful opportunity of travelling to higher places. Our lid of grey can be pierced by going to the higher altitudes.

It seems there is now a mass exodus and anyone that has the time and a car is travelling up. They are overcoming this grey oppression and going to the mountains. There is a small disadvantage. When the Swiss valleys and flat lands are being emptied, it means that the small mountain villages and the winding roads to the heights are being clogged up with traffic and their exhaust fumes: cars searching for parking places, waiting for traffic lights to change and attacking the clean air zones in the heights.

I am staying where I am, I do not need to take the highway to hell.

Giving the birds food and water

Sometimes I feel like they are making a sequel to “The Birds” by Alfred Hitchcock when I sit in the kitchen in the morning writing my Good Morning piece, although these are just sparrows. They arrive in groups in the morning, but wait in the trees until the crows and magpies have disappeared before pouncing on the seeds of the day.

The sit in the trees for a while and by some unknown signal, perhaps a vibration in the air or a noise, they all depart at once. Yesterday I happened to catch them at the moment when they went for a group disappearance flight.

Otherwise look who returned yesterday. The jay called past. I suddenly saw him but as usual was a little too late with the photo just when he was preparing to go again.

He eventually sat in a tree for a while. The jay only appears when the coast is clear and the other birds are not there. He prefers to gather his food in peace and quiet and I read somewhere that they are hoarders and have their own little seed collections somewhere for emergencies. Anyhow this one looked quite well fed and not thin and hungry.

Yesterday I made my little excursion to the stores for a few bits and pieces and todays lunch. If only shopping was always like that. No hustle and bustle and because I did not have so much I could walk leisurely around with my walker to fill with shopping and not have to take one of the trolleys to fill up with three bags full and a little on the side.  Today will be a little more as the week-end approaches. Bulky stuff like a pack of 10 toilet rolls are on the list, although I am trying to reduce the amounts I get.

Looking back on the good old days, I often miss the shopping trips together with Mr. Swiss. He was usually the chauffeur and we would roam around the supermarket together often meeting colleagues and friends from our area and having a pleasant chat. We then went shopping in the morning as we had more time for the necessary. Since I do it alone, I need my mornings for a clean up at home and cooking lunch and have no time to go shopping but have to squeeze that part of it into the afternoon. We used to go daily, but I have organised it for three times a week to give me a little me time on the days without shopping.

We have both grown old with the years and no longer as mobile as we were. Walking is not one of our specialities and Mr. Swiss tires very quickly with his back problems. We have both slowed down considerably. My mobility is also no longer what it was. I can still managed to walk in the store holding and pushing the trolley, but it does not get better with time.  Luckily I can still drive the car, but I will be having a conversation about wheelchair choices later this year with my neurologist. I need a wheelchair that I can take apart and fit into the car. MS is progressive and although I inject my medicine to slow it down, it is only about 30% effective.  However life goes on, it must.

Yesterday they brought the second part of the new (and more modern) Dracula film. Actually I had to laugh a bit at the end. Dracula is on his way to England by boat, on the way killing and eating the crew on the boat.  Fire breaks out on the boat and he lands in the sea. Naturally being all powerful he walks underwater to the shore and then there was a delightful twist. He stands looking at the scenery in the english coastal town and suddenly there are sirens and police cars arrive. The chief of the police is the nun who is now in modern times and not in the middle ages, and proceeds to arrest Dracula. I think I will continue to watch this series, it is developing into a horror comedy.

And now to continued with life. I have now changed my Safari browser on my Apple computer to Google Chrome. Since the last update on Apple Safari is not doing what it should for me. Actually I should have done this some time ago. My mails on my Apple are also not working and I will probably add outlook to the computer as well. I am really becoming a cyber golden oldie.

And to continue with life, A blackbird found it way into a group of sparrows. I am really now gone, so have a good computer time everyone, see you later.