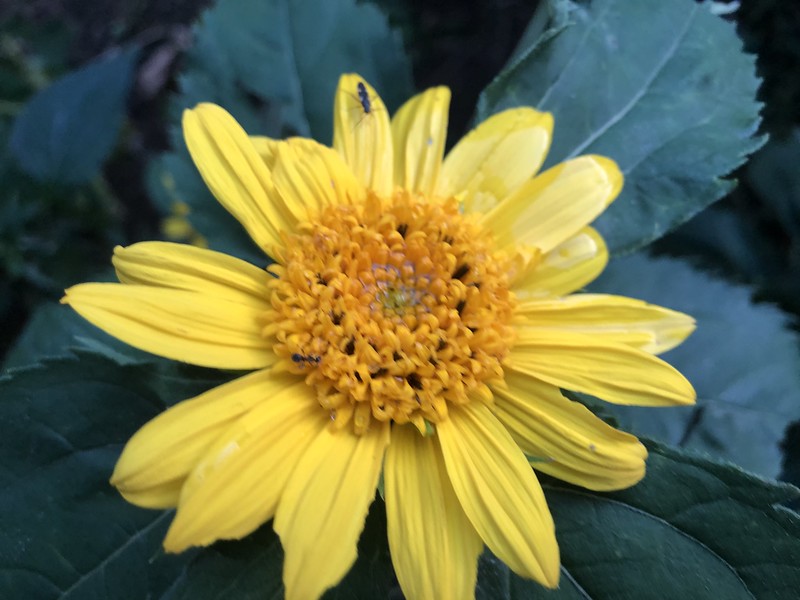 A little bit of sunshine to brighten up a dull day. 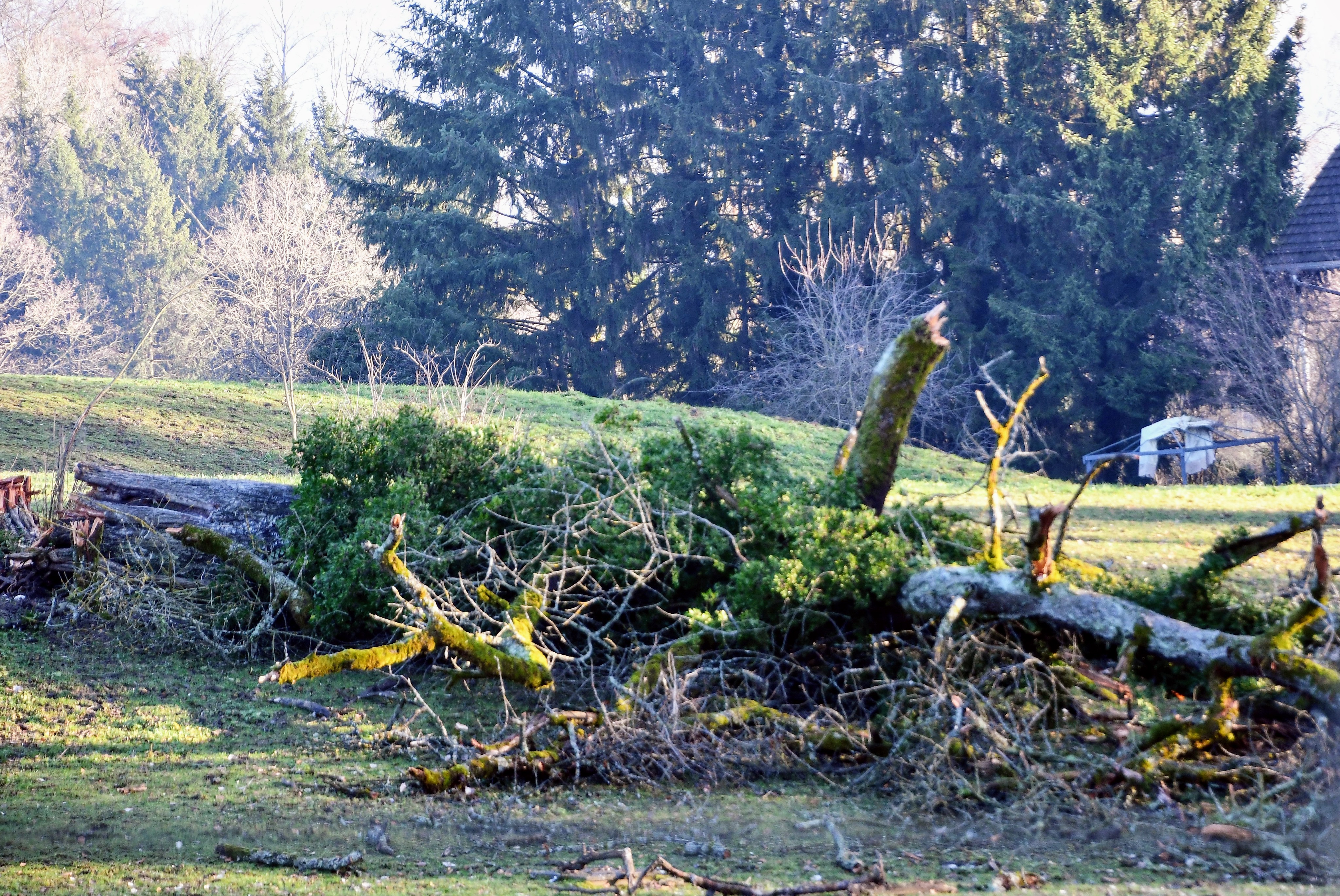 I took a wheelie at the week-end taking photos here and there, the usual route, and then I saw this. A tree that is no longer there. For many years I would go past this tree, sometimes horses would graze below it. I must admit there was not very much left of the tree, just bare branches, but somehow it belonged to the landscape. 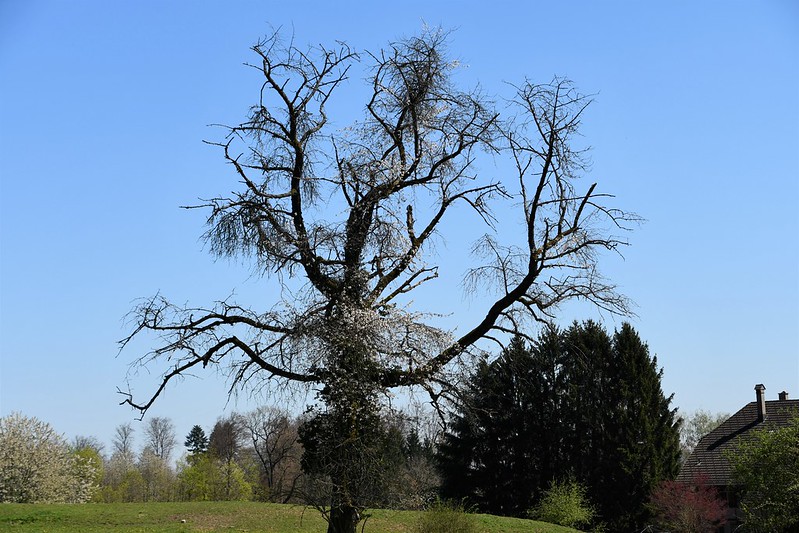 And now it has gone forever. Its branches will no longer have their majestic appearance, as if reaching out to say “I am here and will stay forever”. Ivy had been creeping up the bark for some time, and so it was decided that its time had come: the end of a year, the end of a tree forever. Tree I will miss you. 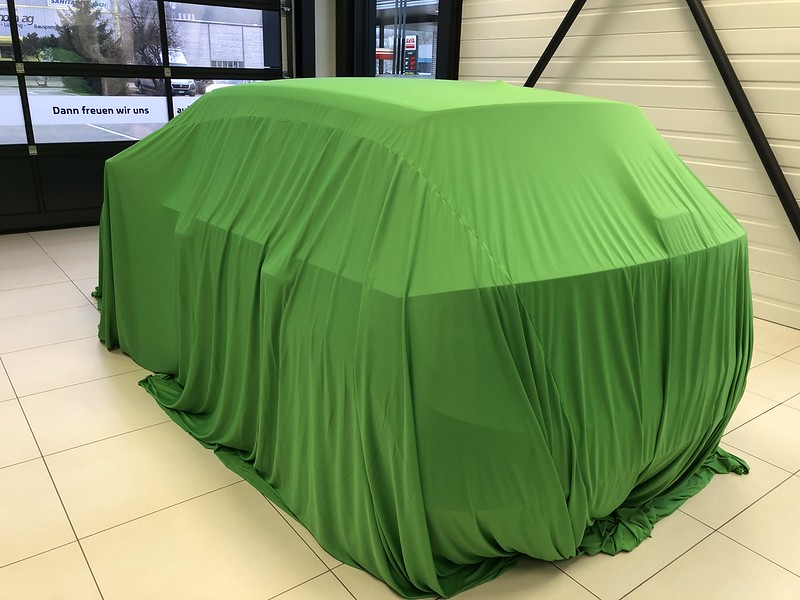 On 27th December 2018 I got my new car, meaning that I have now had it for year. My very first proper car that i bought myself, dealing with a salesman at our garage, deciding which car to buy and even insuring it and all the other bits and pieces. Dealing with the national authorities, getting it permitted to go onto the road. I even closed an insurance for legal dealings in case it might be necessary due to an accident. And no, there have been no accidents, anyhow nothinng too grave. I did have a little encounter with another car, but no permanent damage done. She had a scratch and so did I, but curable to no extra costs. What do they say, that’s life.

I remember when I picked up my car. It was enshrouded in a green cloth, hidden from view and the car salesman unveiled it and even took a photo of me at the moment in time when I could say, “It is all mine”. The make is a Skoda, which is very much similar to Volkswagon, but a little cheaper in price. Mr. Swiss no longer drives a car, which is the main reason why I did it. 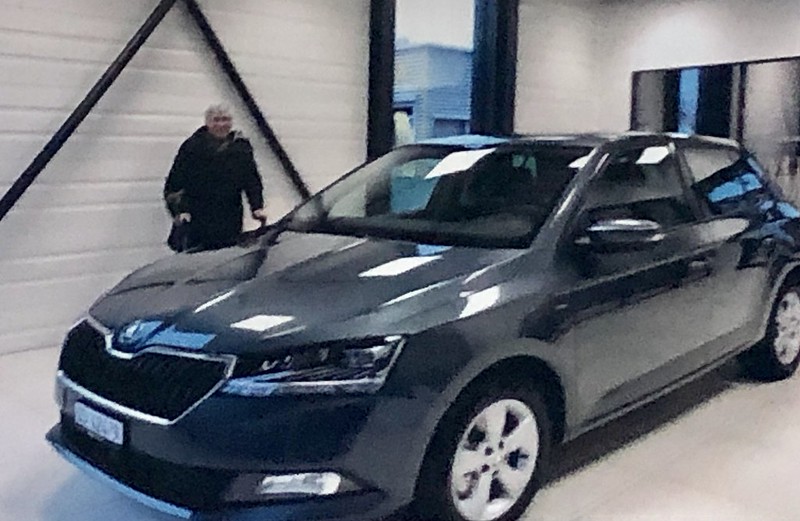 And what were the other highlights of the year?

Actually it was not a bad year after all we looking back. Not once did I have to go to the hospital in an ambulance. In 2018 I had a couple of stupid falls, nothing dramatic, but I cannot stand up under my own power and I needed those stronge muscular ambulance men to pick me up again. This year I did not fall once (more luck than judgement) and also did not break any bones. It was in January 2018 that I broke my leg. I discovered this year that having Multiple Sclerosis is not fun and no matter what treatment you have, it progresses. There is no cure. I inject every second day and I suppose it does help. The illness has many faces and mine leads to disablement of the limbs. I can still manage to walk in a Monty Python way of Ministry of Silly walks style, but with time the ability decreases. Next year might bring the permanent usage of a wheelchair, but let us wait and see.

This year was a chauffeur driven year, taking Mr. Swiss to various appointments for having new eyes and teeth. And in November I became grandmother for the second time, this time it was a granddaughter, so now I have one of each sort.

And today it comes to the end of a decade. I am curious to know how my sitution develops during the next year, but I take it as it comes and intend to continue blogging. Happy New Year everyone and may it be a good one, but who knows. It is written in the stars. 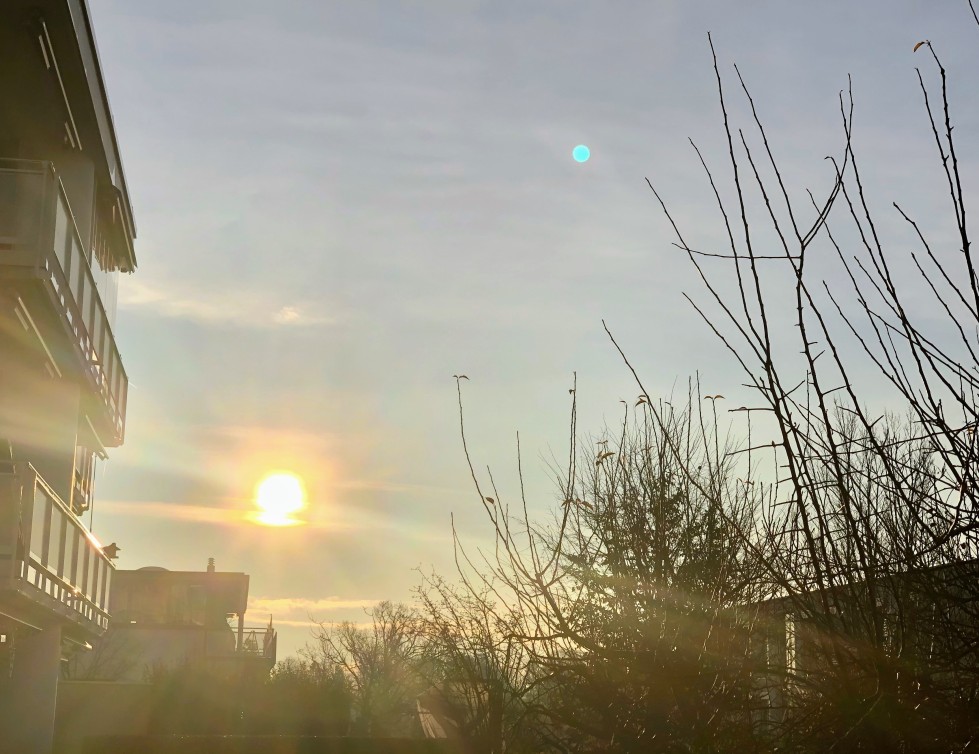 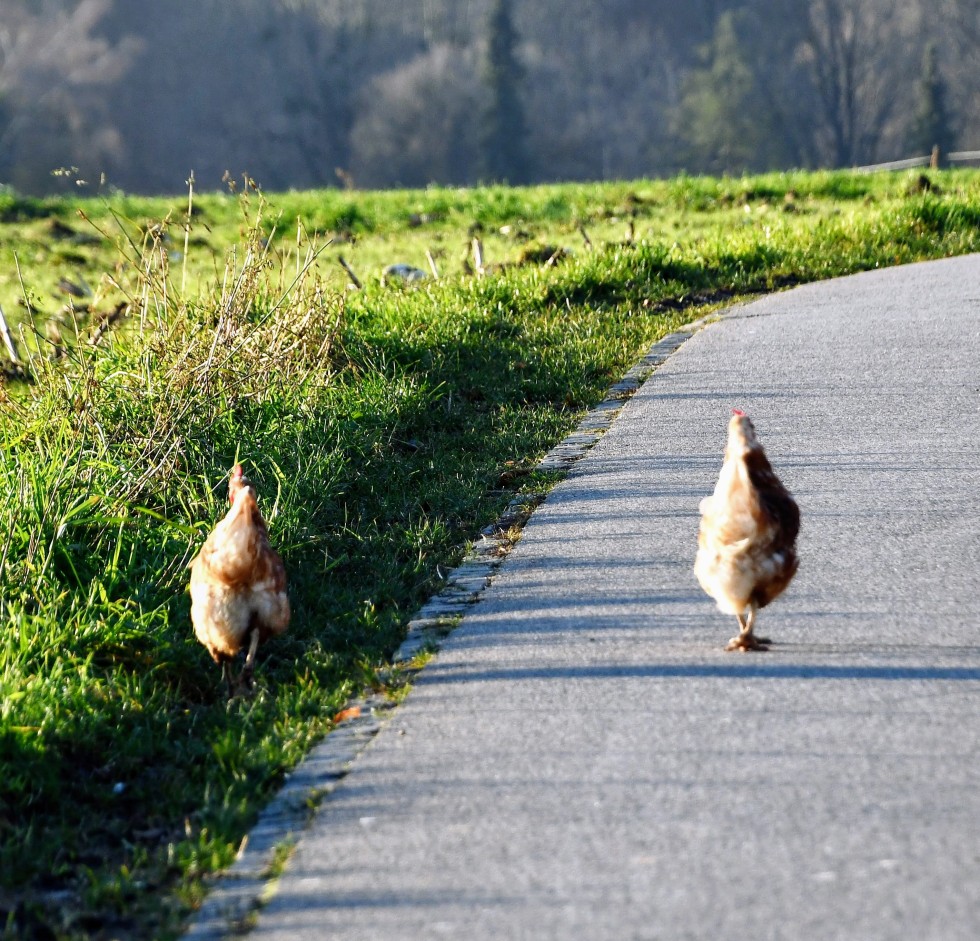 And these two chickens are marching on to year 2020, see you again next year. 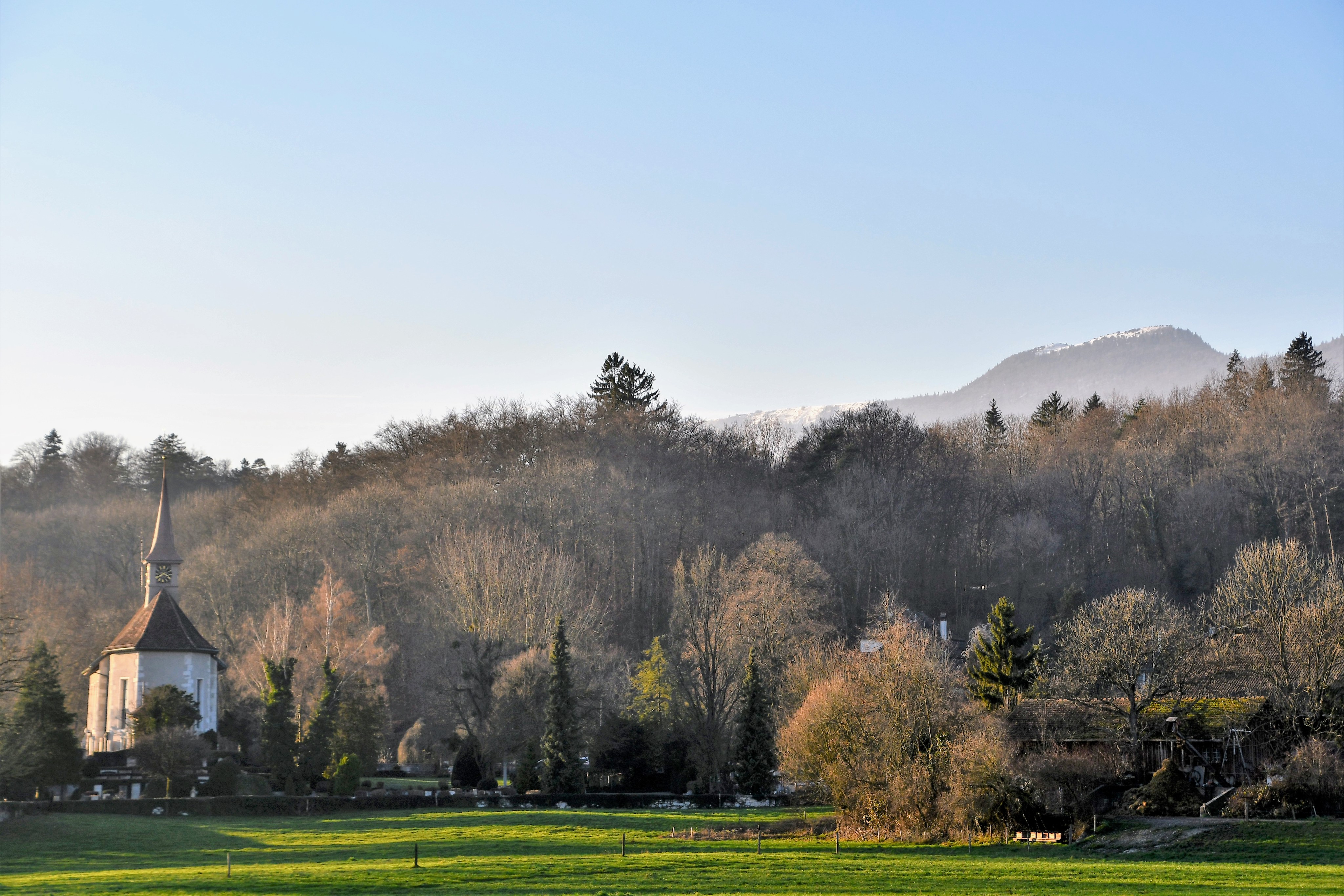 We are having no sunrises at the moment in the morning, so I am still dwelling on my photos on my last wheelie at the week-end. Then the sun was shining in the afternoon and the top part of our village was showing itself in its best way with the church and surrounding trees. In the background the Jura mountains which look over everything. This part is the highest peak in our area, known as the Hasenmatt (rabbit meadow translated). It has a sprinkle of snow but only at the top. In my very young days, before I even met Mr. Swiss, I climbed it with a couple of friends, although climbing is too much said. It was more  steep walk,  but rewarding with the view from the top over the Solothurn middle land.

Otherwise my journey yesterday was restricted to the supermarket to cater for the coming New Year Days. I am glad the Christmas rush is over, but when I arrived at the parking lot yesterday I saw that people just cannot leave it and all the lots were occupied and the visitors were parking again in places that I did not even know you could fit a car in. I drove on to the spaces reserved for the handicapped and lo and behold I found an empty one thank goodness. I discovered that this year people are a little more considerate about leaving those spaces open for those that need them. Last year was a catastrophe and everyone was using them.

By the way the word “Aktion” showing on the various items actually means “special reduced prices” for us, and sometimes it really pays off. Meat is very expensive in Switzerland and if you can get it 30% or more reduced, it is worth it. I prefer to buy my meat over the counter. I get served by people I have got to know and can pick and choose what I want. I had a long list yesterday, but had completed it in an hour. Although there were many shoppers, our supermarket is quite spacious and there was no problem moving around.

I am not doing special meals for New Year, just the normal. I very much doubt that we will stay up until midnight tonight to see the New Year in. In our younger and more fitter days we would crack a bottle of Champagne (Sekt) and Mr. Swiss and I would toast in the New Year. This is now a thing of the past and we are usually hugging the beds at least an hour before. 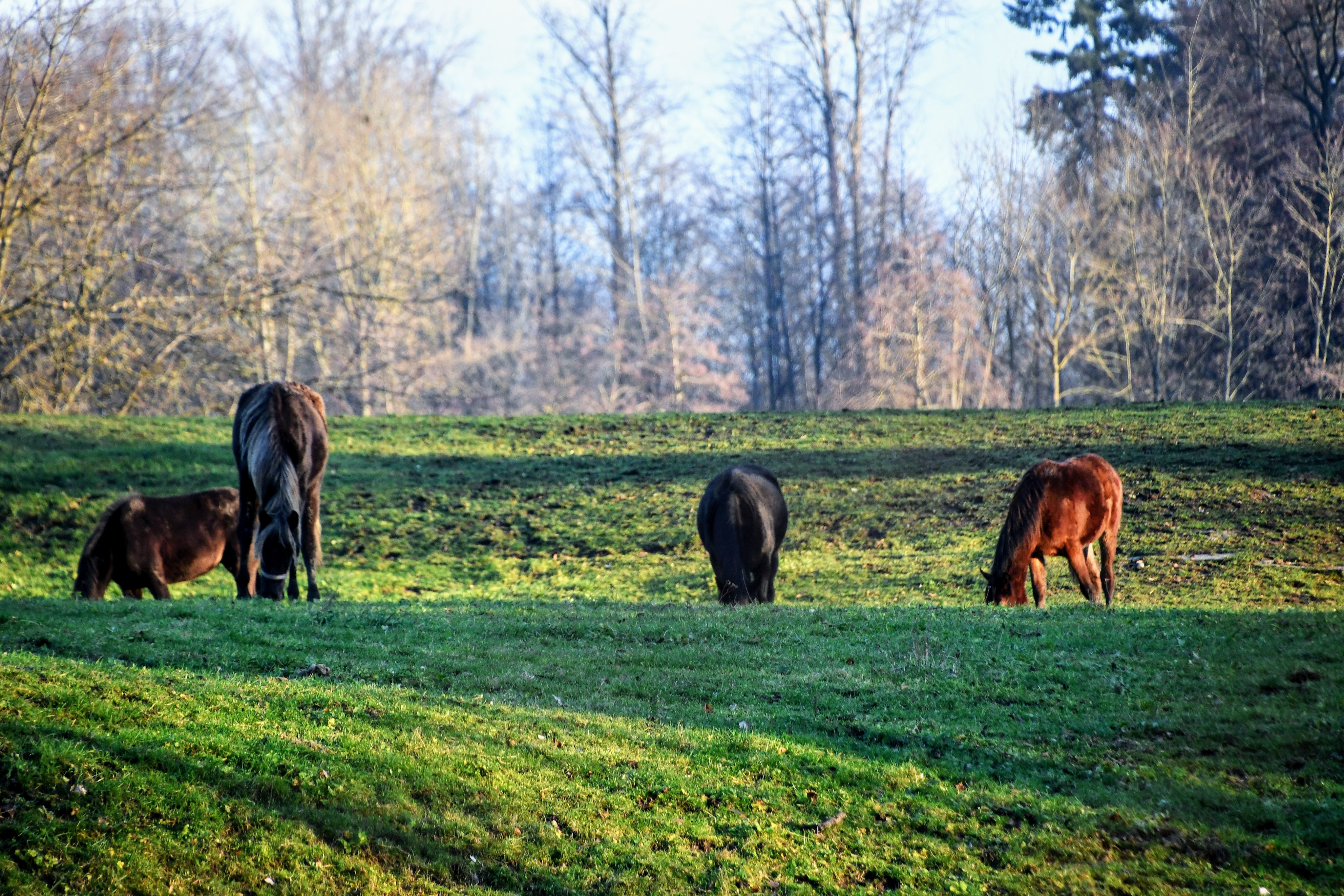 On my last wheelie I noticed that the horses had been relased for a walk on the field and were making the most of the grazing possibilities on the meadow.

Today is planned  a day at home. My shopping is done until Thursday afternoon and I am taking it easy. I now and again think about leaving the blogging for a couple of days, but it never seems to work that way and I still find myself on the computer in the afternoon.

But now I am off to what I should do: clear up the place a bit and get organised. Have a good day everyone and if you are around at midnight, then toast us bed huggers that will be missing all the action. 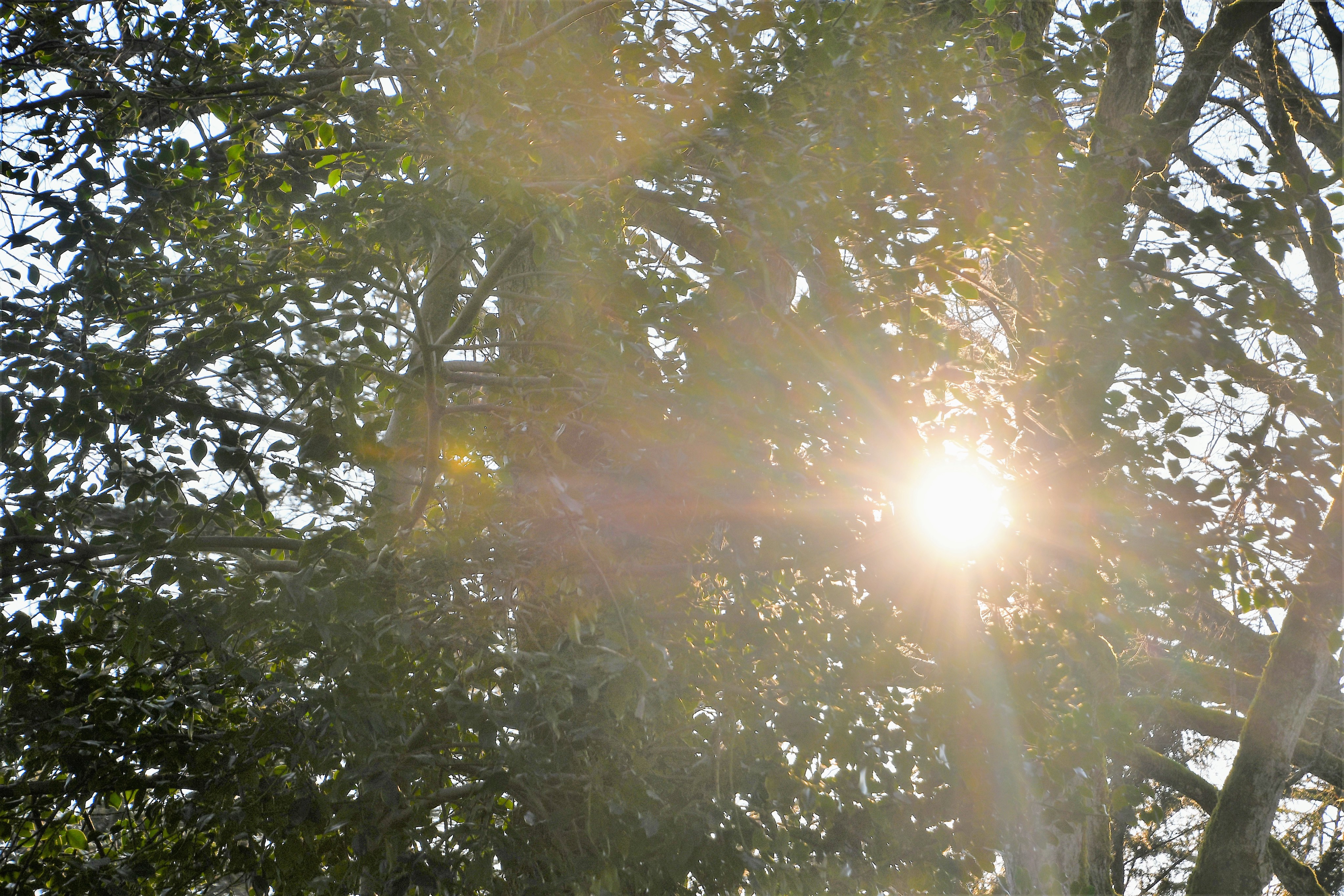