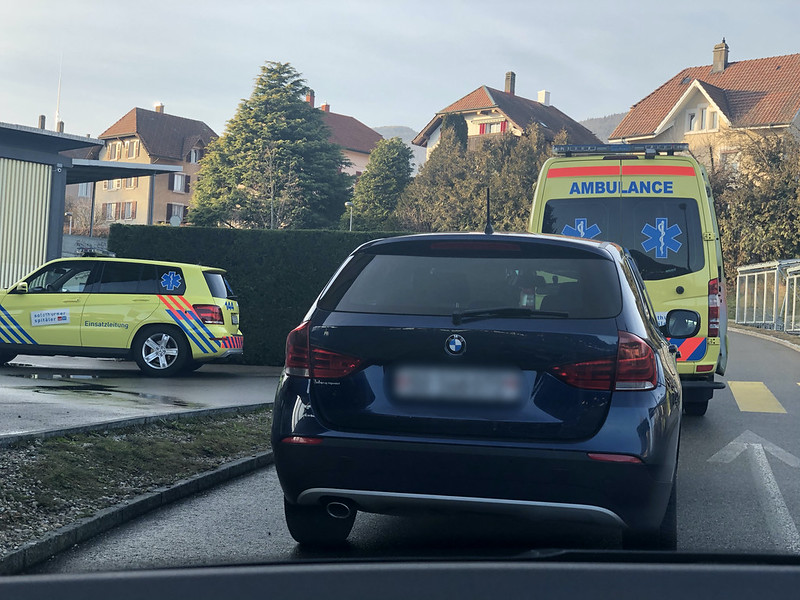 When I went to the store this afternoon on my shopping trip I did not expect to be sitting in my car for almost an hour behind this blue car (which was a police car) that was parked in front of a local ambulance which was also parked.

I will begin at the beginning. I was on the last stretch of the supermarket road and suddenly I heard the police sirens, somewhere behind me. Funny thing is that in my 30 years of driving this was only the second time it ever happend, the first time being two days ago. I seem to have an attraction for emergencies at the moment. So what did I do? I put my foot on the brake and waited. Nothing happened except that suddenly someone gave me a warning bleep on their horn behind me, so I went back into motion and drove into the parking lot on my way to the spaces for the handicapped. Suddenly the police car past in front of me whilst I was waiting to drive out onto the road. He had now turned off the horn and so I turned the corner onto the street as everthing was now clear. I was in the wrong place at the wrong time. As I drove a little further my path was blocked by the two vehicles in the picture. I had no warning, no signal, that the path was now blocked. I was just the last car moving.

After sitting for five minutes a policeman came over to me and said it would only be half an hour there has been a problem in the store.

The only thing left to do was wait and of course, take a few photos. From the window of my blocked car I could see the supermarket entrance and there was quite a commotion. There was a guy sitting on a chair and is accompanying person was looking after him. There were two ambulance men and two police also making themselves busy. There had not been an accident I discovered, the guy had just felt bad. I did say to the police office thank goodness there was not an armed robbery. He even laughed.

There was also a second ambulance parked on the side. After a while the police guy came over again and said I could drive backwards down the road and back onto the parkhouse spaces. I told him no way was I going to. I am handicapped, the street is narrow and afterwards I have to do a back turn into the entrance of the parking spaces. Afterwards he even offered to do it for me with the car. I told him that would not work because it would be impossible for me to walk afterwards to the supermarket. I need the parking spots for the handicapped so I will wait.

This was really an unexpected event for me. In the meanwhile I called Mr. Swiss to tell him of my predicament. And so I continued to wait. As I was parked next to the Christmas tree I had something to look at in the meanwhile.

After almost an hour the ambulance man appeared again (he had been moving stuff backwards and forwards constantly) and the policman got into his car. Could I hope we would soon be moving? Yes, he ignited his motor and moved his car and the ambulance moved on. I could proceed with my journey. Needless to say all the handicapped parking spaces were completely empty as I was the only one that was blocked on the road.

Sometimes I really have to wonder why these things always happen to me.

4 thoughts on “FOWC with Fandango: Expect”