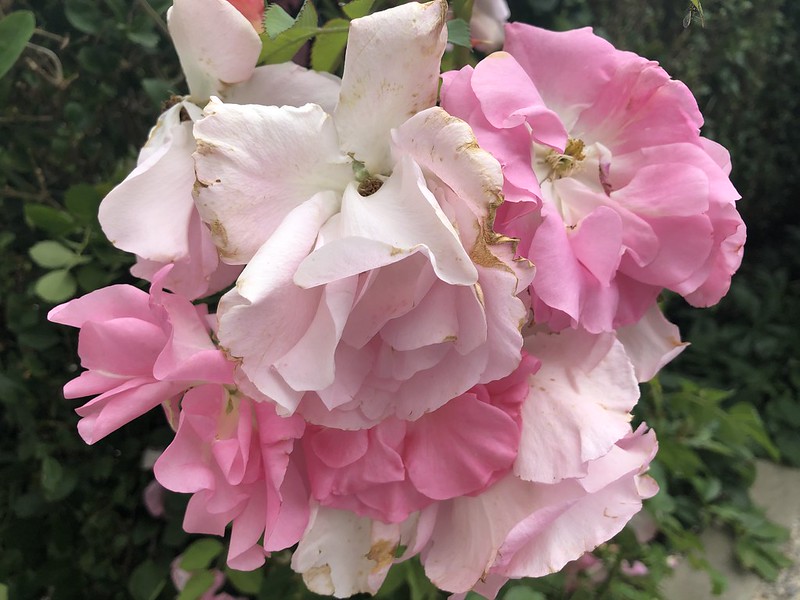 And these roses have been climbing for the past 15 years in my garden. 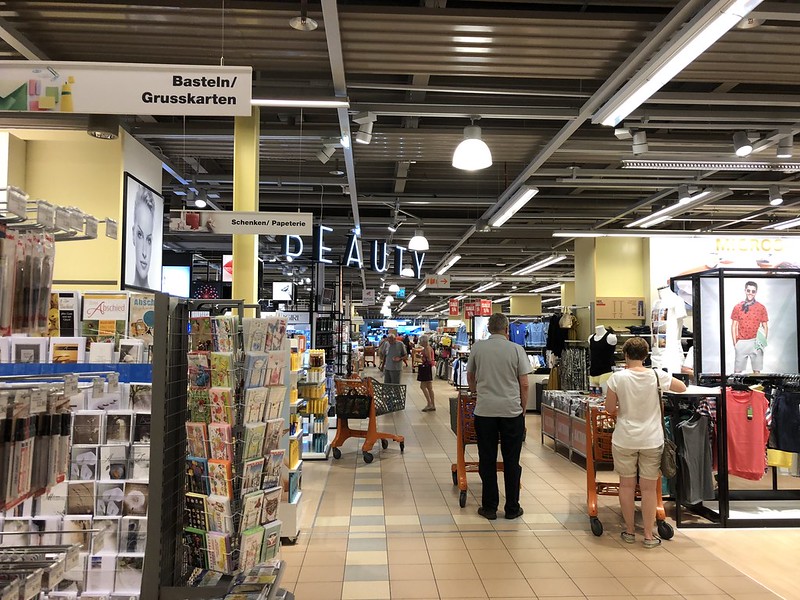 Today I was in one of the stores in the mall. I had a quest. Mr. Swiss needed to refill his supply of cigarettes and he also added Kirschstengel on the list (chocolate stems filled with cherry schnapps). It can get quite narrow in the store sometimes, but there is always enough room to move, if you are polite.

I chose the cherry stems, and as I was departing a rather large lady walked past me and all I felt was a push as she walked past. I know I can be fussy sometimes, but I was sure I did not imagine it. On the other side of the corridor another lady stopped and looked at me and said “did you see that, she just pushed you to  one side”. I felt it more than saw it. Instead of choosing to follow me to where she wanted to go, she just pushed me out of the way. The lady was dressed quite respectable and said no word. I am still recovering from her audacity.

I am now planning for Christmas. What I buy now I do not have to buy next week.

This is red cabbage, shredded into fine pieces, precooked and ready to eat. It just needs warming up in a saucepan, so what could be better. I cooked red cabbage myself for years. I sliced it finely, fried it quickly in butter, added salt and some red wine, put the lid on and let it simmer for 1-2 hours. You cannot really overcook it. About 15 minutes before serving I added some fruit vinegar to give it a bit of a slight sour bite and then it was ready to serve. Today I buy it in a paket. I deserve a rest now and again when cooking and it tastes just as good. I will be serving it with a cooked ham and potato on boxing day, a traditional Christmas meal.

However there is something missing. On high days and holidays (an expression from my cockney mum)  I like to add some cooked chestnuts to it. Today I was on the search for ready cooked chestnuts as I do not intend to spend time peeling and cooking them: ready cooked and peeled are just as good.

It became a problem. 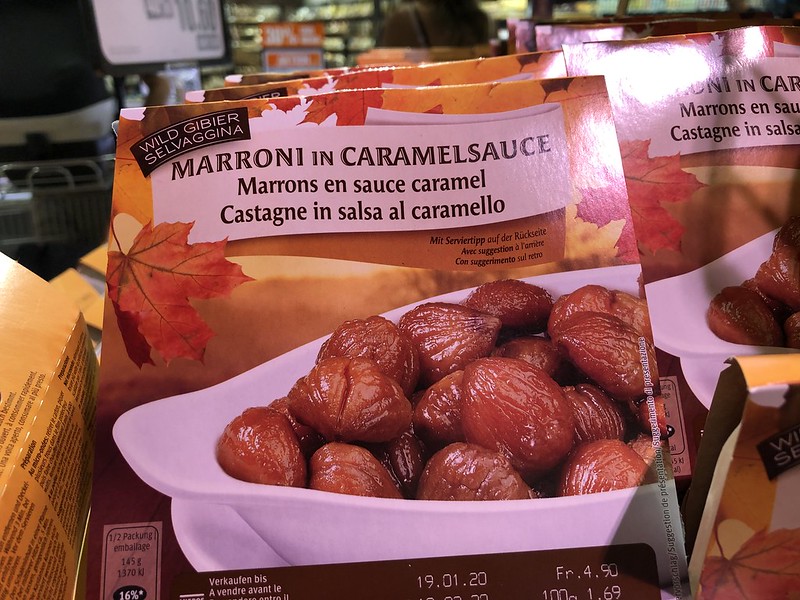 The only ready cooked chestnuts I found were in a caramel sauce and that is not really my thing, although I will have to consult Mr. Swiss. If he approves of the mixture I might buy them. Otherwise there will be no mix and we will be eating pure red cabbage. 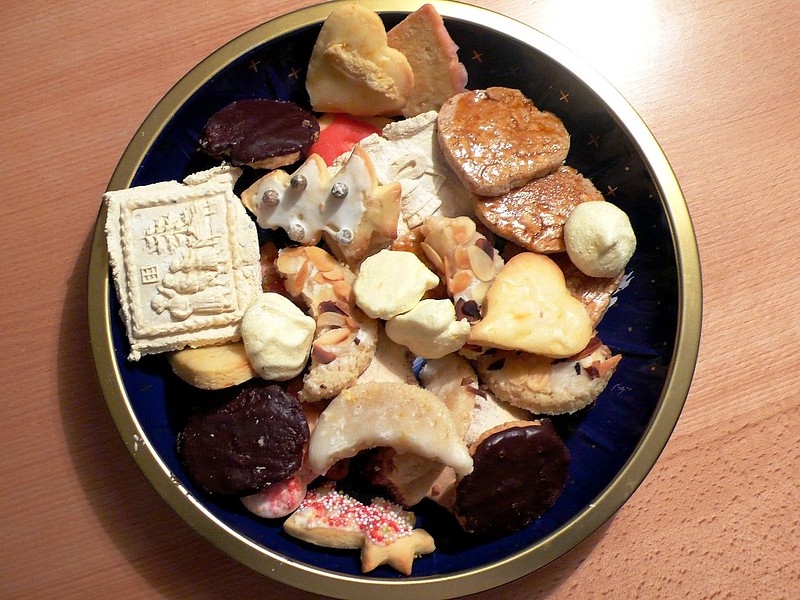 These are our typical Christmas cookies that housewives bake every year in various European countries. I know as I was one of them for a few years. Today I just buy the ready made cookies, as I now longer have the time or patience. I would make up to 10 different sorts: some with chocolate, some decorated and many with various fruity tastes or spicy. These are my originals.

I am astonished more and more in the morning at our sky performances. This morning the sunrise was again something a little different. Whoever is responsible for this appearance, must be using a different paint box daily. To complete the picture I even got a grand finale yesterday evening.

This was quite a dramatic one and I expected a hand to reach down from those clouds. If only Cecil B DeMille or one of those other Hollywood film directors had been here, it would have been a perfect setting for one of those religious epics. Or even Steve Spielberg might have found a suitable setting “Return of the Poltergeist” or something like that.

But now back to real life and my daily tasks.

These two appear every morning as soon as the table is laid. I now always place two walnuts on the ground for them, hoping to get a shot of them cracking them open. No such luck, as soon as I take a first look the walnuts have already disappeared on their first visit and they probably stow them away in a hiding place for a later shell demolishing session. Now they are just have a good peck at what lays on the ground and the sparrows are watching from the trees and waiting for them to go. I never see sparrows and the big birds eating together.

Yesterday I had another visitor in the garden. Roschti, the feline from next door, paid us a visit. Actually when I entered the kitchen the window was open and I just saw his tail disappearing after helping himself to Tabby’s food bowl. I had a few words with him, but he did not even run away. He just took a place in the garden waiting for something to happen. Those cats really have no respect for humans.

We are really getting some warmer weather at the moment and the weather prophets are blaming it on the Föhn (pronounced “fern”) which is a warm wind coming from the South and travelling over the alps to us in the middle land. There is no climate change mystery here, it has existed for as long as Switzerland exists, even longer. Switzerland is not such an ancient country, it used to be chopped up into little pieces between Germany and Italy and France, although those countries also had other names then, something like Gaul etc. In any case the Föhn is nothing new and neither are the aches and pains and headaches it can cause, although I am not a sufferer. Mr.Swiss is, although since he has become a professional golden oldie, he no longer mentions it. I think his aches and pains are now caused by something called an ageing process.

And I will now move on. I should phone the chemist to make sure that Mr. Swiss medicine is available when I go today. I also have plans for booking a visit to my hairdresser. If only hair would not grow, it would be much easier.

I also have some planning to do now. I made my Christmas shopping list yesterday. Not for gifts, but for food as there are a few things I can already organise. I also want to order my meat for the Christmas days, although this year it is not so complicated as the stores will be open again on boxing day. That is the part of Christmas I do not like, otherwise it would be easy going, but the organisation is such a stress. My circumstances are now that I have to do it all on my own as Mr. Swiss is no longer as fit and mobile as he was and can no longer help with the shopping, but I will survive.  I am glad for a quiet time over the holidays and glad that we have no big invites or that I have to feed the five thousand as it would need more than a couple of fish and a loaf of bread.

So have a good day everyone, and may you have smooth runnings at the last Christmas rush. To celebrate we lit the third candle on our Christmas wreath yesterday as is the custom here. No bad for a non-believer, but I do like a bit of tradition now and again.