A memory of Christmas Past: all my uncles and aunts united on one photo with me third from the left. I was in my early twenties on the photo and already living in Switzerland, but would always return home for the family Christmas. The complete family, maternal side, would meet at my Aunts house on Christmas day.

Oh, what memories they are. I can still remember it as if it was yesterday. It was not an easy task getting together. Only one uncle had a car, and only in later years, otherwise we we obliged to take public transport which stopped at 4.00 pm in the afternoon. After Christmas dinner, the turkey, mum and dad and me got ready for the journey to Dagenham, East of London,  where my aunt lived with her family. We managed to get the last underground train of the day to Dagenham and afterwards was the half hour walk from the station to my aunt’s house.

It was worth it. My two uncles and aunts had also arrived and we were all assembled again, as every year as long as I could remember.  I grew up with these annual Christmas celebrations.  When we arrived we kids made ourselves comfortable in front of the TV. I remember my aunt being the first in the family to have ITV, the first British commercial TV with the advertisements, something completely different.

The aunts all went to the kitchen to prepare the evening tea. There was nothing like smoked salmon etc. in the good old days. We were happy with some ham and I remember desert was tinned fruit topped with jelly and custard all in a sort of small wax form. The same every year, but who cared, it was our family Christmas. And after the food we all moved to the living room in front of the tree. One of the aunts or uncles was chosen to “pick the tree” meaning the gifts were handed out to us kids. And then party time began.

We cousins all moved on to another room where we had own own gramophone and played the same records every year and the aunts and uncles stayed in the living room and had their music as well.

And these are my five cousins. One was much older as he was born before the second world war, otherwise I was the second oldest and the others followed the following years.

Eventually we all joined the aunts and uncles at their party and the dancing and singing began, all the old records. Piano music was a great favourite and you joined in with the words. Let us not forget grandad. 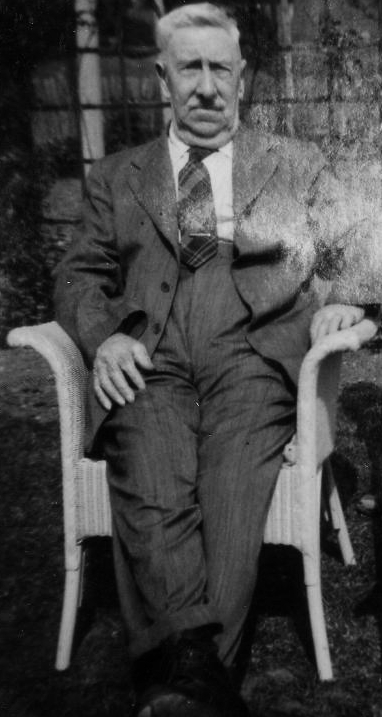 He would sit in the corner in his armchair and the patron of the family. If we were Italian he would have been il capo I suppose, but we were just a family with London cockney origins and he was happy with his cigarettes and his glass of beer.

The men looked after him and now and again he make his excursion to a certain little house, after so much beer drinking. We would all make a path through the room and he would be escorted to his destination.  After a while he returned and there was a repeat performance until he settled again in his chair. He must have been around 80 years old at the time.

Good old grandad, I remember him well. He lived in the same house as my family and was always there. Sometimes I wished I knew more about his family, his brothers and sisters and parents, although I did my research eventually and was surprised at what I discovered.

Our christmas party continued until the early hours of the morning. Sleeping arrangements were organised: two kids to a bed with two aunts. I don’t know how we managed it, but we kids did not need a lot of room. The men all slept on the floor in the living room, in the 50’s you were not so spoilt as today.

I was watching a BBC TV programme this week about how Christmas customs have changed over the years and I remember many of the changes. Was it better in the earlier days? Difficult to say, we did not expect so much. There were no iPhones or computers. I remember my cousin wishing for a Mr. Potato man. You had a your own potato and the box was full of plastic ears, noses and eyes as well as a mouth to stick into the potato and eventually you had created a potato man. He so wanted one for Christmas that he eventually got three of them from each aunt and uncle. If you are reading this Mick, you might remember.

And now to return to the present. No more old family Christmas in England for me, but I am content to have my memories.