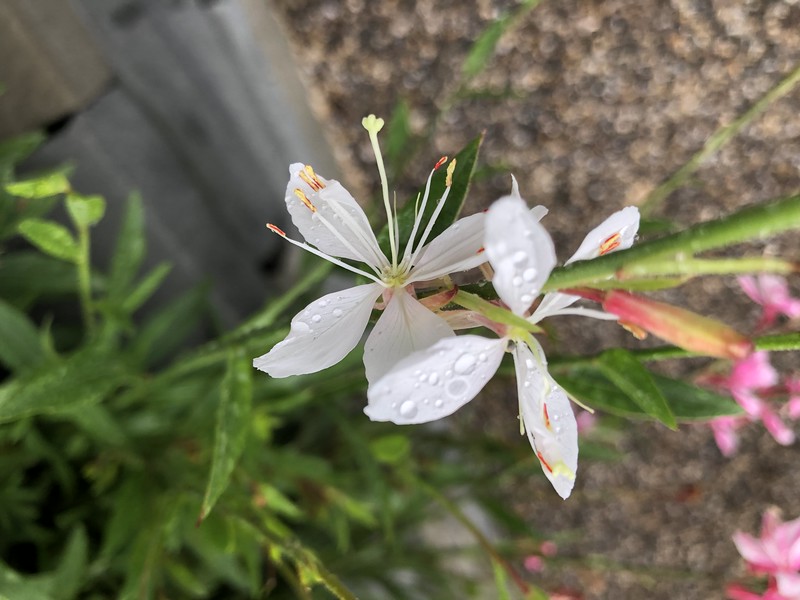 This one flowers in white and pink in my garden and continuously. Even in December there are still one or two flowers appearing.

Can you see it, on the right on the ground, it is snow, our first fall in the lowlands this Winter. It all began when I mounted my car to go shopping around 3.00 in the afternoon. I noticed tiny little spots of rain falling, but rain is not white. These were little white spots, was it snow? And so as I drove along I switched on the windscreen wipers and though no more about it.

After an hour my shopping was finished in the store and as I returned to my car I noticed that everything was quite wet and even crackling a little, with cold I suppose. My chosen supermarket is in a near by village higher than our village, at the foot of the local mountain and so we are nearer to the snow line. As I drove off there were flakes of the dreaded white stuff falling everywhere, it was really snowing. As I approached home it seemed to be more into rain. Eventually I arrived and broke the news to Mr. Swiss. He said look out of the window, and yes, we had snow. That was almost 2 hours ago and now our garden looks like this.

Even the light has changed. Perhaps snow is not rare, but I have not seen it since last January. 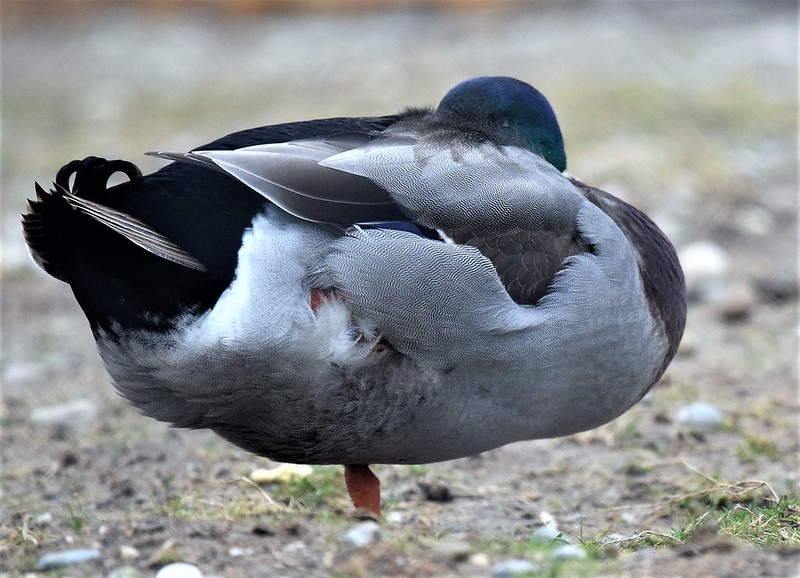 Even a duck likes to have a quiet few minutes to himself now and again, and they do it all on one leg. 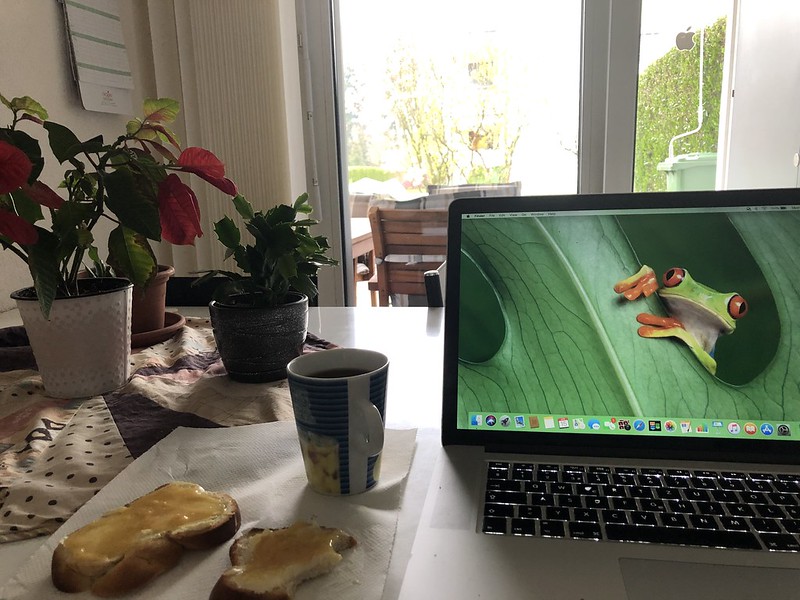 A routine for many years is to prepare my breakfast in the morning with a cup of tea and fire up the computer for my first Good Morning blog of the day.

Wonderful isn’t it. Just a normal sunrise on a clear sky and even the outlines of the alps at the edge of it all. When you grow up in one of the most densely populated areas of London amongst bricks, traffic and of course the British rain, not to mention the smells of gas in the air,  you appreciate being in open country and every day I am thankful for it, even if you sometimes get the cloudy days. Everyone is talking about climate change, and with reason, but when I think of the smog days in London when I was growing up, it seems it all started in East London in the fifties: arriving at school in the morning after the walk and blowing in your handkerchief to find it full of sooty particles, but I survived.

Even the evenings have their charm. Yesterday evening I saw a bright light in the sky, thinking one of the local lamps. I took a closer look outside, and yes, it was the moon, and I think a full moon. My moon photos are never so good as others I am too lazy to get out my tripod for a professional attempt.

Taking a closer look through the trees was almost romantic. I just have to be careful to keep a steady hand.

Even the birds were obliging yesterday and this magpie got a little closer. I apply all sorts of tricks with their food to capture them and have started to sprinkle some seeds on the raised bed edge which is nearer to my window.

I even got an action photo as the magpie flew away.

Otherwise it was the final dental visit for Mr. Swiss yesterday and my final one is today and then, clapping my hands, I have nothing more (for the time being, you never know) on my agenda, at least this year. Mr. Swiss reminded me today that it was time to dispose of our used batteries. They have a collection bin in the supermarket. This is a another new chore and I will not collect them for a twice a year visit, but a once a week visit. Carrying a heavy bag of spent batteries is not my idea of fun when shopping. Why do men always collect things. We women are much better organised.

By he way England are having general elections tomorrow. The news is full of it, will it be BoJo (the conservatives lead by Boris Johnson) or Jeremy Corbyn from the Labour party? Somehow I have returning memories of the good old days between Harold MacMillan and Harold Wilson, but then there was no Brexit Party mixing in lead by a guy called Nigel Farage. Anyhow may the best man win, although it has nothing to do with politics when I say BoJo is certainly something completely different.

And what about our little Switzerland, that dot in the middle of Europe. We also have a government and such a small country that we can afford to have a direct democracy and today we are having our annual voting for our new cabinet ministers. Actually not “we” but the members of parliament are choosing who will be our president for 2020. Yes we have a president and it changes every year. It changes so often, that I do not even remember who it is at the moment, but that is golden oldie forgetfulness.  I just asked Mr. Swiss and he couldn’t remember either, so I had a look on the Swiss govenment web site and discovered it is Ueli Maurer, not one of my favourites although it has nothing to do with a political party really. We have seven ministers, chosen by a formular.  3×2 plus 1 cover our political parties. This year our green party wants to gate crash with a minister as they are gaining in popularity. Anyhow we will hear and see it all by radio and TV this morning and follow the results. So who cares about the British Elections, we Swiss have them as well.

And now I should really go. It is a normal day with shopping in the afternoon and I intend to clean room and cupboard doors this morning, just to freshen them up.

For those of you in the Christmas spirit of things I saw this nativity arrangement in one of our store windows in town yesterday. I seem to have captured the three kings on their visit and the actual crib scene is a little blurred in the background.

Anyhow have a good day, enjoy and make the most of it. I will be back (a promise not a threat).