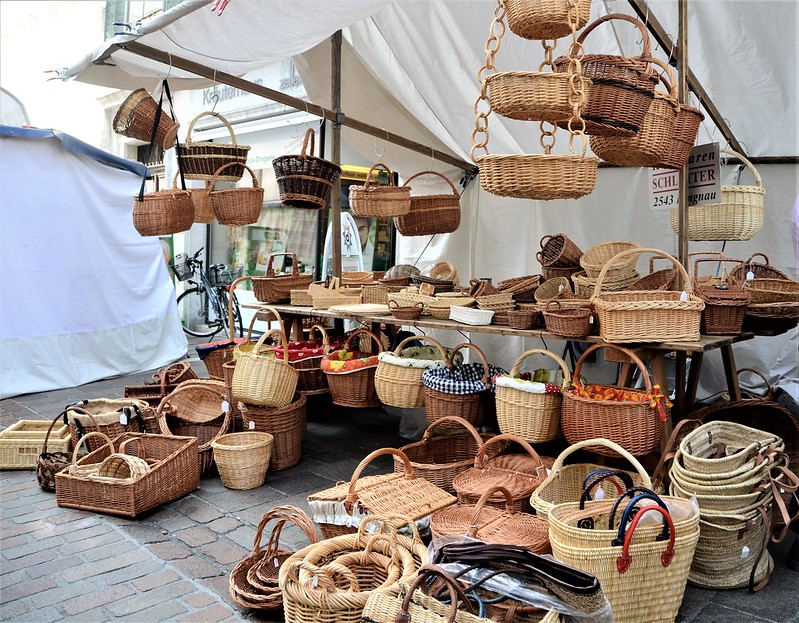 There are baskets and baskets
Which one shall I choose?
A round one or a square one
Something I can use

One thing I really regret is that the digital camera was only invented in the seventies. Today I can take photos of everything and thanks to computer science can immediately upload them and put them in my archives. Of course holding an actual photo in the hand is still something wonderful, but you can print your photos at your heart’s content choosing the ones you need or wish to discard.

I have just returned from a wheelie in my chair with my camera, of course. I shot a photo of the Jura mountains and here you can see it on the camera. Actually I discovered I had over one hundred photos on the camera after my wheelie in my chair. That is the disadvantage with the digital photography, at least mine. I get easily carried away.

I can think of so many situations in the past that I would have loved to have captured with a photo. My family only used cameras for holiday pictures and my interest in photography only came with the passing years, because of the digital camera.

And this photo was also taken on the same journey, but this time with my mobile phone camera. It shows a cloudy afternoon and somewhere at the bottom as a white building, the local castle Waldegg.

I am not really sure that I am happy about this November thing, it means the cold snowy days are approaching, but my back garden is still looking quite respectable.

Another grey damp morning, although no rain as such, just generally wet. Today is one of the first Fridays since a long while that I will be at home and not on a quest for week-end shopping: not that we are going places, but I had a golden oldie lapse of memory yesterday. It was yesterday lunch time and my No. 1 son informed that he was the only one working in the company yesterday morning, the others had decided to prolong their already long week-end. Not having week-ends as such, being a golden oldie, I got curious and realised that the next day is 1st November. Known as All Souls Day and a holiday in the catholic areas of Switzerland.  I was planning on a visit to the store yesterday with Mr Swiss just to pick up his new eye glasses with him. but then realised the whole excursion would be devoted to getting food supplies to cover the long weekend holiday. I quickly made a plan of things to get, and yesterday afternoon became a longer shopping trip, whilst Mr. Swiss got his new glasses fitted. Luckily it was all in the same area.

That was an unprecedented stress I can tell you, but I succeeded it getting supplies to cover our needs until Monday lunchtime, the result being that I am now free to do what I want until then. No surprise excursions, no shopping and just taking it easy as everything is closed for the holiday today. Of course I forgot a few things, not very much, but No. 1 son decided to go for a trip to Zürich today as they are open and have no catholic holiday and will pick up what I forgot. Describing what I need could be problematic when you have an autistic son, but with help from a mobile telephone which he has, we took a few photos from the store web site and now he is completely in the picture. Oh for the modern online developments.

Otherwise I am now having breakfast and thinking what shall I do with my day. I might go for a wheelie through the local cemetery as today is the big day: some countries even call it “day of the dead”, although we tend to have our own more subdued descriptions. I remember last year it was good weather with a small groups of musicians outside and an open air service. I know I am a non-believer, but that does not mean that I do not enjoy a bit of ceremony, especially with my camera. I hope the rain stays away.

In the meanwhile strange things are happening to one of my indoor plants. It is a kalanchoe, although a special breed. Not showing the wonderful small flowers they usually have, but this had quite fleshy leaves and no flowers – up to now. It is also kown as a flapjack. It survives mainly on air and love with just a little sprinkle of water once a week. Reading the instructions, it seems it does flower once in its life and then the plant dies, leaving small new plants behind. I noticed yesterday that the small new plants are now appearing from the roots, and this probably means it is getting ready for the big flowering stem. On the one side, the plant will eventually die, but on the other ii will be left with its children to look after. It is becoming a family thing.

And just to put you in the picture, here is the usual kalanchoe as we know it. I like them very much and always have a flowering specimen somewhere at home. They last a few months with their flowers, need very little care and also seem to survive on air and love with very little water.

My azalea is also still flowering, and I have had it at least a month.

Yesterday we watched one of the good old films. I had seen it a few times, but one of the real good ones. It was “Charley Varrick” with Walther Matteau and directed by Don Siegel.  One of the reasons we watched it again was that there was a documentary programme showing the idea behind the film and the production with Don Siegel. We now watched the film knowing a little more. The funny thing about this film was that it was never given very much publicity, and I must say it was really one of the best. Everyone had a criminal mind, but the bad guys were really bad – all ruthless mafia. It was a 1971 film, but has not lost on its reality. I can only recommend it.

And now to move on with the usual chores of the day, taking it easy as I go. I have plenty to iron from the linen from the beds yesteday. There is no rush and I have everything under control. Have a good day and I hope you are all recovering from the tricks and treats from yesterday if you had them.