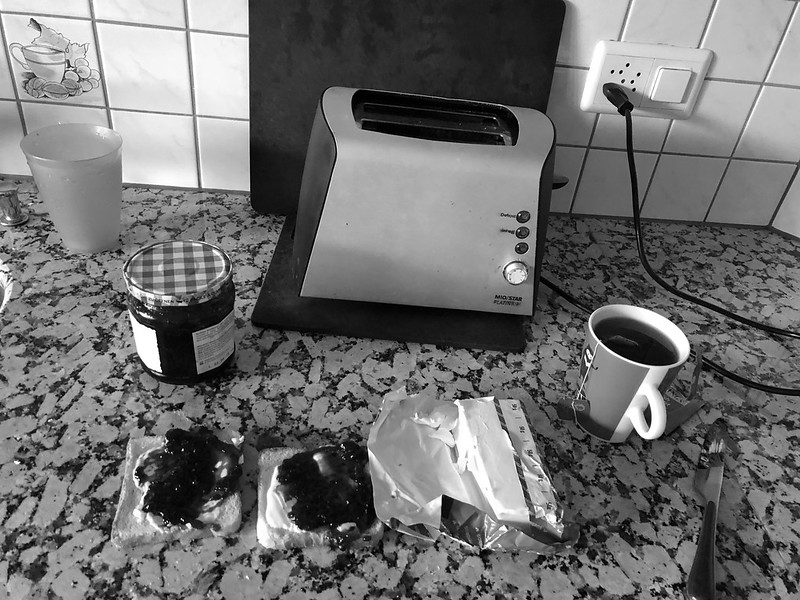 The toaster for my breakfast 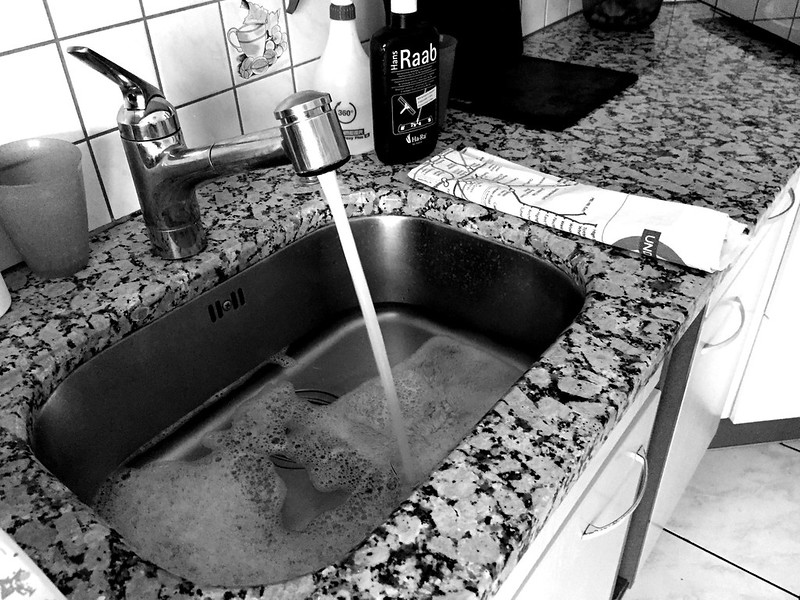 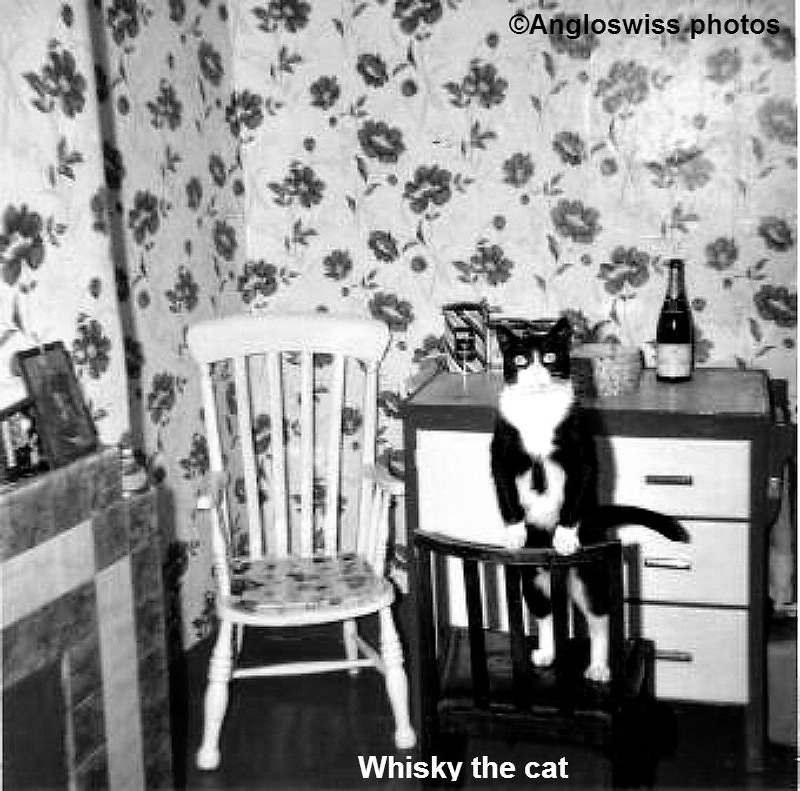 And this is a very old photo from the sixties taken in our kitchen in the East End of London starring our cat Whisky and standing in his favourite pose on the back of a chair where she would often take a sleep leaning on the back of the chair – an old memory of my teenage years. 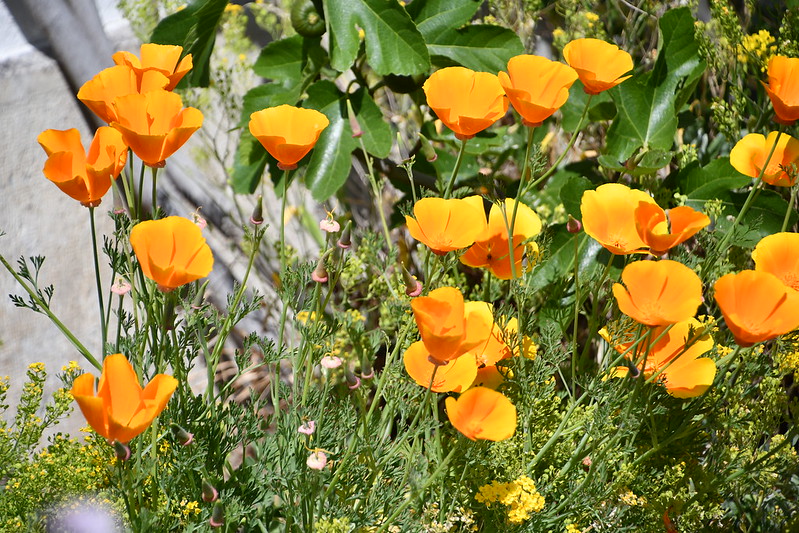 These were growing in a garden in our village. They might be related to those that are known as the California poppy. 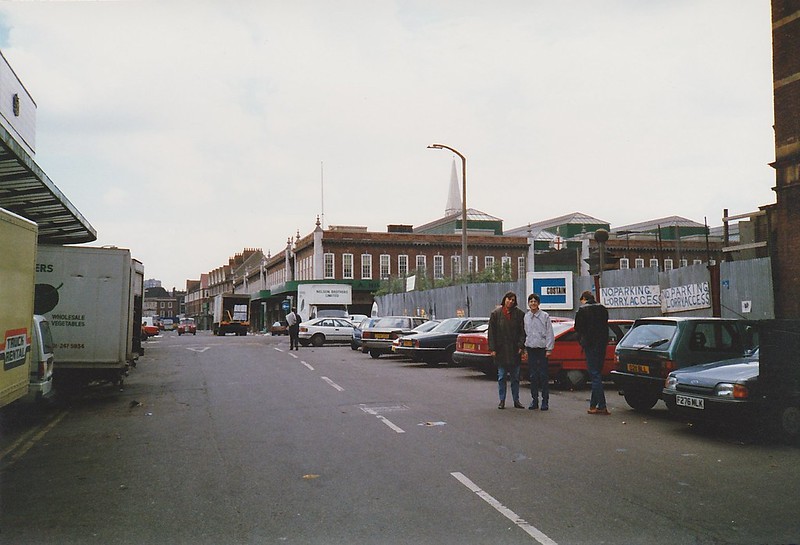 This photo was taken some years ago in London with my two sons. It was a place where my grammar school was, in the City of London at Spitalfields Fruit and Vegetable market. Behind the metal fence were the remains of the building which was once a place for 500 girls attending their school daily. Today it has become part of modern London, our school building was occupying land that was too expensive for a school. Today it has become a modern market to attract the tourists.

This was not my only school. My first school was an infants school. A very old building in the East End of London for boys and girls aged from 5 to 7. It also no longer exists as it was. It was reorganised to a boy’s primary school for ages from 7 to 10, and so I also have no remains of this school. 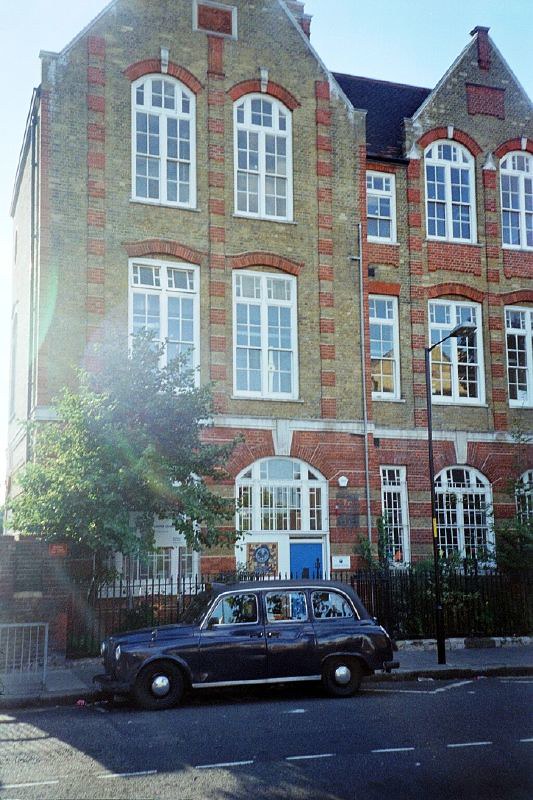 And from the age of 8 to 11 I was at a primary school in East London. Yes, that no longer exists. It was demolished to make way for high rise apartments. London has changed rapidly in the last 60 years. Buildings have been removed that were in the way and no fitted modern developments.

I seemed to have left a path of rubble and destruction behind me, but it was really not intentional. I got my education, and it has served me well during life. I still have contact with a few school friends, even if we are all golden oldies today. Through the computer everything is possible.

And my school days? They were OK. I came out of it alive, even if the buildings no longer exist.

Is this from the sublime to the ridiculous? I do not think so. All flowers have their moments were we “ooh” and “aah” but even they are not immortal. These two orchids were bought in the same week, some time in April I think and they kept their flowers until two weeks ago. The pink one on the left went first. First the flowers wilt and then they drop off.A few days later the white one, on the right, was showing the same symptoms. Did I cry? No. Did the flowers cry, not at all, they stayed in their pots and went a little yellow in the stalks. 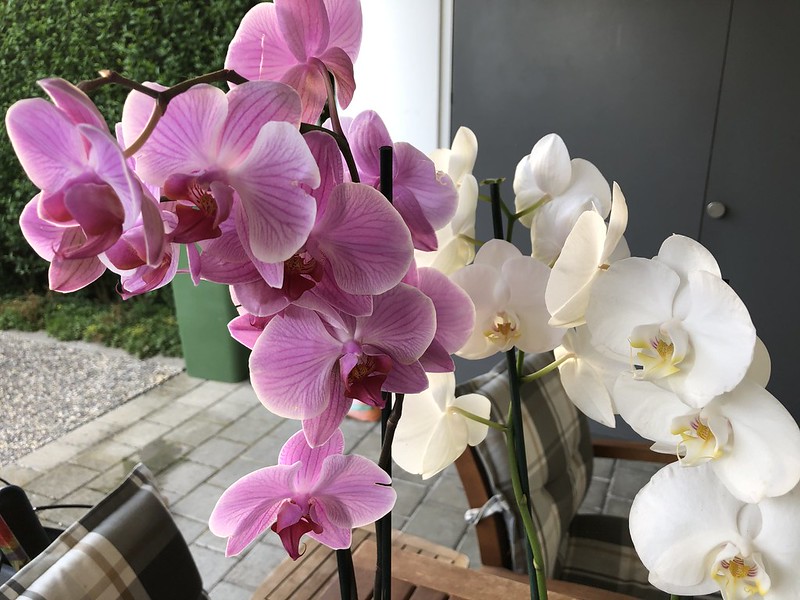 I cut the dead parts away and did not even hear a scream, the flowers were dead as a doornail. If they were human perhaps we would have gone into mourning, but they are flowers and we have the hope that they will return again with a new flower stalk. Perhaps not, but I can always buy a new one. My flowers do not cry. but they might get a little wet if I spray them or put them out in the rain – Such is the life of a flower. In the meanwhile I bought two new orchids to give these time to recover and return. 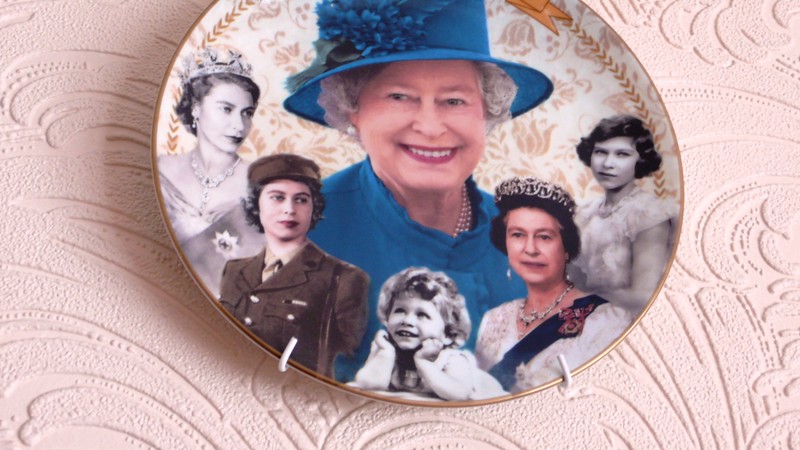 What could be more majestic that a wall plate showing Queen Elizabeth of the UK in her various ages, from child to adult. My friend is a keen follower and has a few souvenirs. I am not really such a monachist, but she does not really do so much harm, and is now a grand old lady even overtaking Queen Victoria in age and throne years. 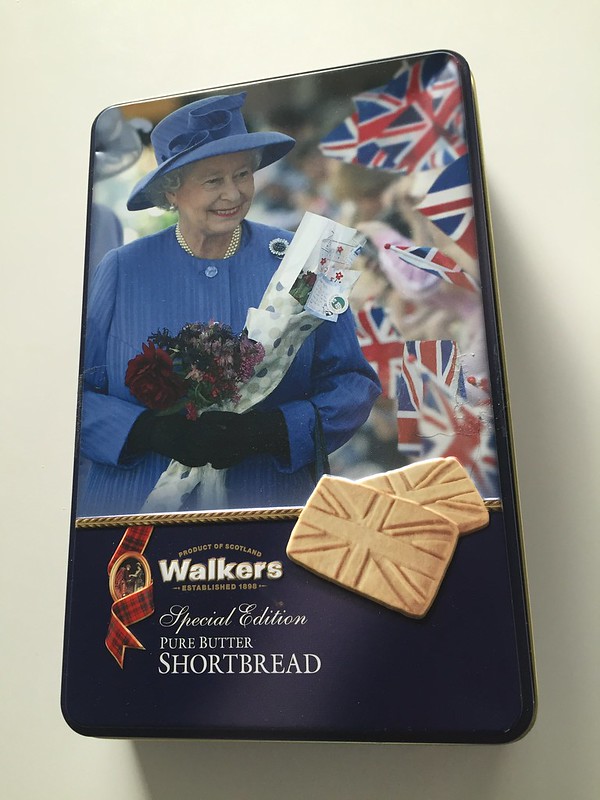 Even I got a little enthusiastic when I saw this biscuit tin at London City airport before boarding a flight back to Zürich. Was it the tin, or the shortbread biscuits that attracted me? I think it was a little of both. A majestic tin of biscuits.

I was up a little earlier this morning, just 10 minutes. My first action of the day is to open the blinds and take a step outside, with a camera of course. Usually it is just my mobile phone camera for a quick photo of the morning. As you can see the early bird catches the  cloud and moon (or should be worm) and I was quite delighted with this floating cloud with a tinge of red reflection from the sun. Even the new moon decided to show before it said goodbye. There are rewards for a rising early I noticed. I also took a photo with my super Nikon DSLR to get a little closer.

I also added a photo of the garden in the early morning. Since taking the photos the mist has thickened giving everything a touch of mystery, although the sun will be arriving soon and it will all be gone.

Yesterday was another day of almost stress. My shopping excursion was later as Mr. Swiss had his appointment at the opticians in the middle of the afternon and whilst he was having his eyes tested I did the shopping. I joined him afterwards were he was busy choosing his new frames for the glasses. As he also has vario glass, as I do, it takes a little longer to fix the point of focus. Eventually everything was completed, and now he just has a 1-2 week wait for the new glasses, although my experience is that it goes quicker.

We left the shopping mall just in time to get caught up in the evening traffic when the working population are on their way home. We both belonged to that group some years ago and it brought back a few memories. Eventually we arrived home and whilst Mr. Swiss had a relaxed half an hour I prepared our evening food which is the usual cold cuts and the trimmings. I had absolutely no time for a visit to my computer and was seriously thinking about leaving it after such a busy day.

However, I am a succour for punishment, and just have to write a few bits and pieces. It has really become part of my life, and I am lost without it, so after tea I was back on the computer and managed to finish by early evening. It is the same case with photography, I need my photos, even if I no longer go so far to take them. The seasons change and so do the subjects. Today I have a more or less free day and have planned a little excursion in the afternoon – with camera of course.

The remainder of the evening was one of my favourite programmes on the BBC TV, at least it has become one of my favourites. “The Apprentice” where various candidates compete for a job in the leadership of  a business company. I believe the original came from the States where a guy called Donald Trump was the main figure. He now has a new job but still has a bunch of apprentices to choose from it seems.

Here is birdy photo of yesterday featuring my local magpie. He was busy pecking around to see what food was on offer. This week-end I will be fitting up the birdhouse once again. Mr. Swiss said I should wait, but I have waited long enough.

I treated myself to a new orchid yesterday. Every week the local store has a special offer and this week it was orchid week again. My pink orchid dropped its flowers a week ago, after almost six months and the white one followed this week, also after six months, so I have put them into semi retirement and got myself a new one. I am hoping that this one will also last as long as the others and that the others might flower again. Orchids are such a thankful flower.

And now breakfast is finished, my writing is also coming to an end and I have other things to do for my golden oldie therapy. Have a good day, and make the most of your computers, and perhaps cameras.