There just isn’t very much happening at the moment in the Autumn way of things in my area. I have not been able to get out very far to have a look around, too much other stuff going on. These trees are opposite my garden on the estate. 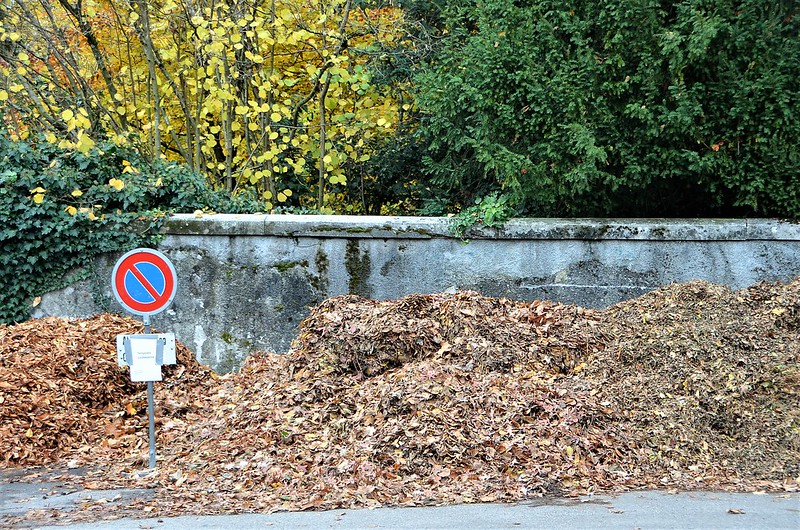 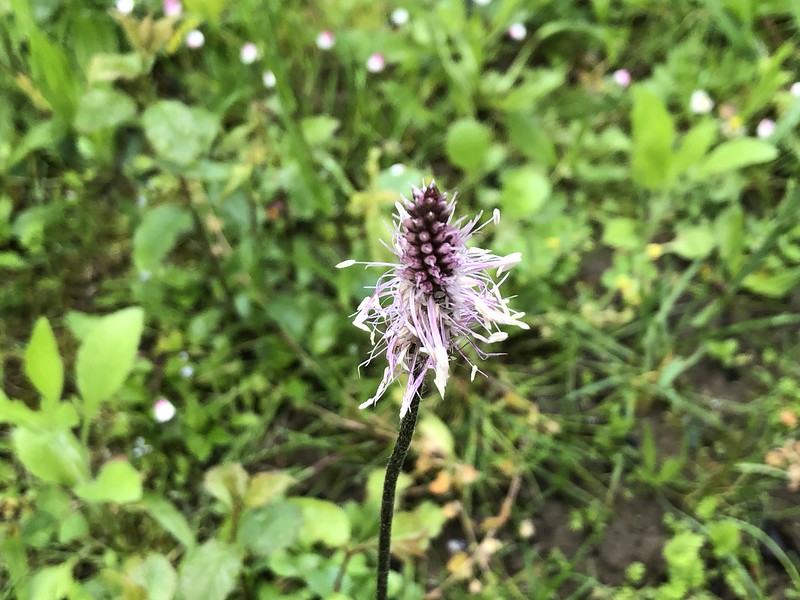 That’s what my plant finder called it, so I supposed it must be one of those. I see them often, but like most “happy go lucky I grow anywhere plants”, it never told me its name.

What is there to say about a ruler? We have many in the world. Some are OK, some are not so good, and we just do not talk about the others. My ruler is long, so long that I did not have the room to include it all in one photo. Here we have the beginning of the ruler. It is straight and only manages to show 9 centimetres. Forget inches, we are decimal in Europe, even the Brits who usually do everything different to the others. I am sure Boris Johnson would agree with me, although he is not really a ruler, because his government are still thinking about it.

And now we have the middle of the ruler, sorry that I missed a few centimetres. In the middle of ruling, things tend to get a bit boring and some rulers even find that they are no longer as popular as they were. Some of them might throw a tantrum, and others begin to put those in prison that are regarded as a disturbance to their ideas.

And now we reach the end of my ruler just 30 centimetres. Of course there are longer rulers, some never stop ruling until they are either deposed through a revolution, or assasination. Some stay until the bitter end when everyone is glad that they have at last drawn their final breath.

Of course there are always exceptions. The Queen of England is still ruling, although only because the government has it all under control. And she does not really do any harm. There are other rulers who have no intention of giving up and stay to the bitter end, convinced about their own immortality.

And that is the end of my ruler, created by a local printer. 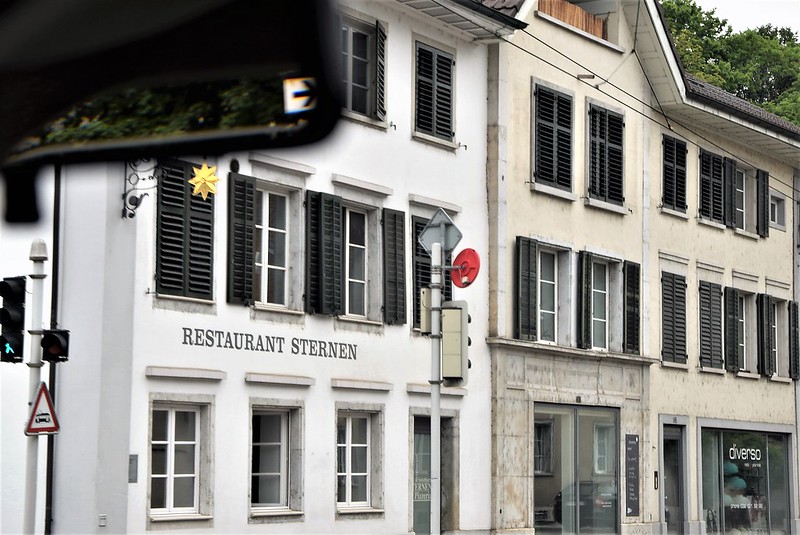 Today I went to the store for the week-end shopping. On the way I drive pass this restaurant and the two large windows next to it. The third window belongs to a hairdresser, but the window is now longer.

As I drove along the road I saw signs with “Police” written on it and even saw a couple of the uniformed members wandering around. I so regretted that I could not take a photo whilst I was driving, it would have been a perfect photo of broken. I have no idea how it happened, but a car was half way into the completely smashed window on the right. There were pieces of glass everywhere on the road and pavement, luckily not the part where I was driving. Of course the car was also quite damaged. As I could not stop to examine the details I unfortunately had to drive on

When I did the return journey the car was no longer there, and the half broken window had been completely removed. There was a lady clearing away the articles that were behind the window. What a wonderful opportunity that would have been for a photo, although I could not help thinking that someone now had a ruined week-end. As there was no sign of ambulance etc. I am hoping that there were no injuries. 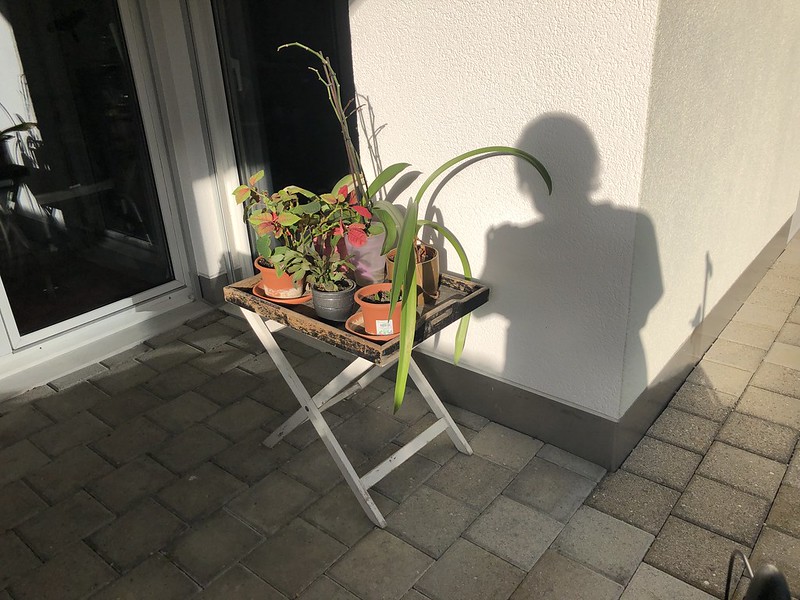 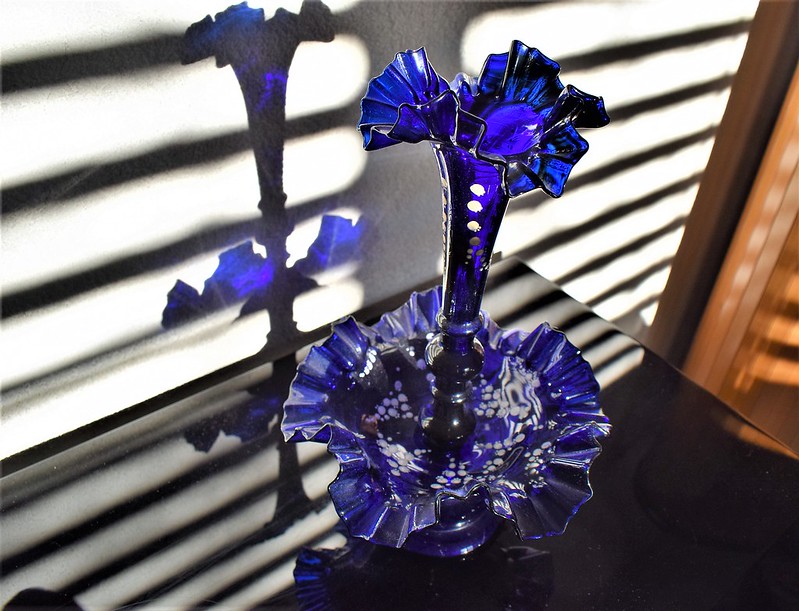 And sometimes even colours are reflected 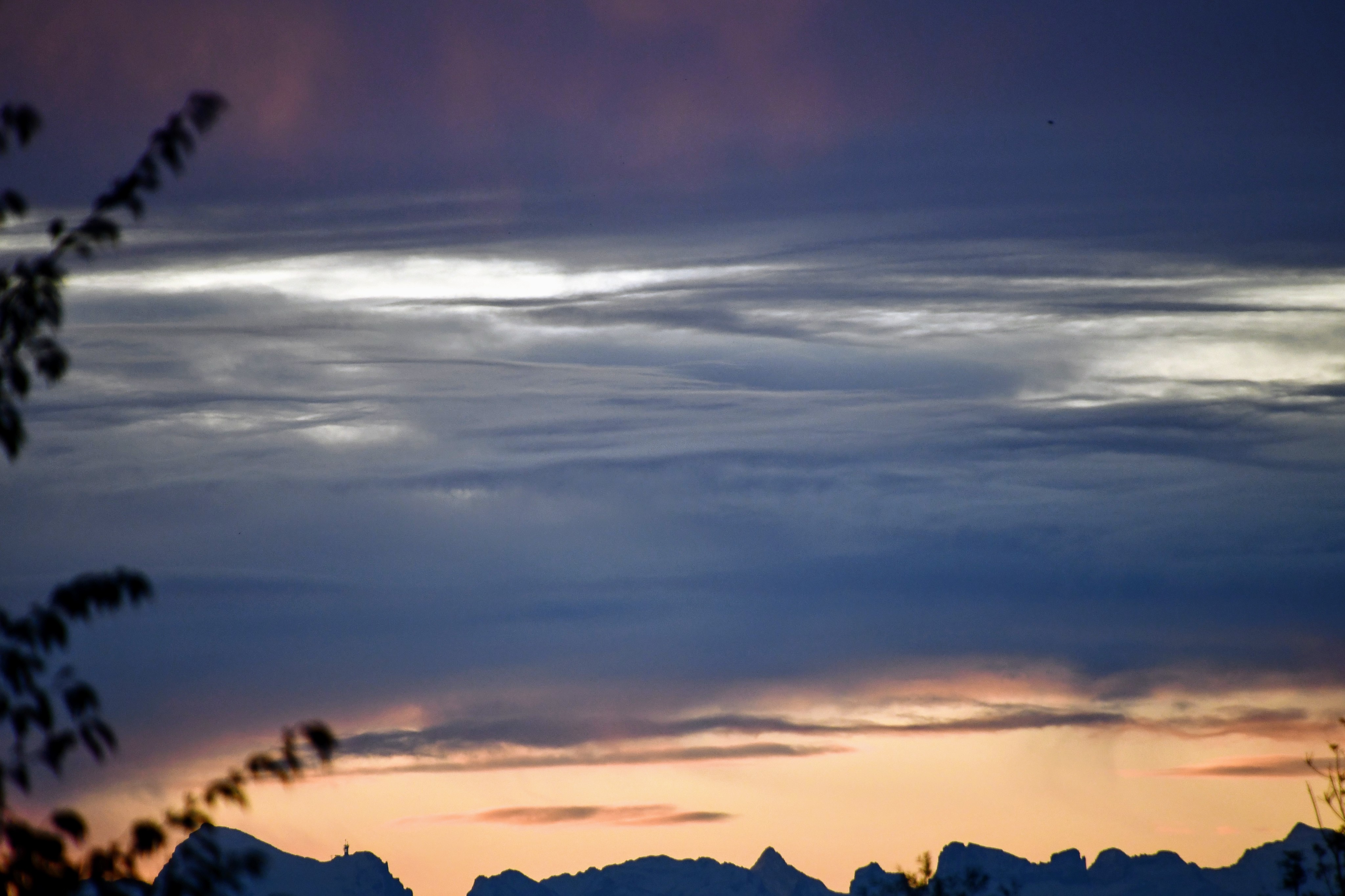 How is this for a morning sunrise? It is actually from yesterday, but today’s is exactly the same and as I wasn’t here in the morning yesterday I did not want to withhold it. As I was not sitting at the breakfast table yesterday and blogging I took the photo with my Nikon camera which gets better closeup details than my mobile. Here you can clearly see the outline of the alps at the bottom of the picture. I was off with Mr. Swiss yesterday morning for his final eye test to get the perscription for his new glasses, although he will have to have another test at the opticians when getting the glasses just for a closer check.

I was glad to put all these special excursions behind me yesterday and at last we seemed to have had a clear calendar, that was until I finished lunch and manage to break off a piece of tooth whilst eating a lamb chop. I hate these inconveniences. It was a tooth that once had the nerve removed and it is for me more a cosmetic treatment I hope afterwards, but there again I have to go to the dentist and have it done. I now have a date for Tuesday afternoon so I will be glad to get it behind me.

Amongst my feathered visitors yesterday morning, a new bird arrived. A great tit put in an appearance. I used to get quite a few when I still had my lawn, but last year only one or two. I think it suited her to eat the food from ground level amongst the other birds and it was really a surprise when I uploaded the photo. 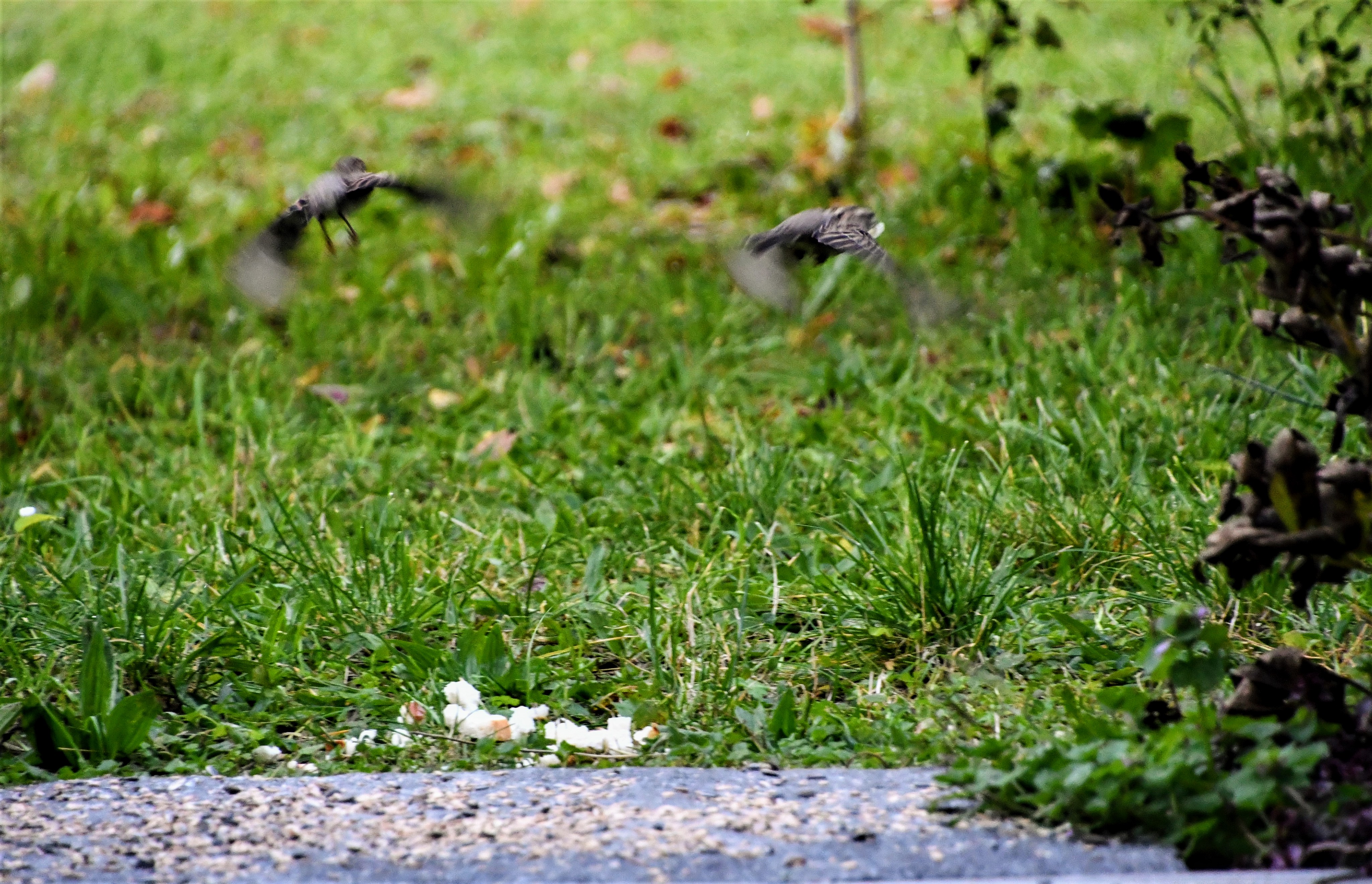 I also managed to capture a couple of sparrows in the air as they were preparing to land on the breakfast table.

Mr. Crow also dropped in to give a caw here and there. He seems to be the boss and all the others fly away when he arrives, probably to give him space for his food.

I noticed yesterday that the Brits, or at least Boris Johnson, has reached an agreement for their Brexit. Now Boris is No. 1 man and everyone finds he is not such a bad guy after all, although the British parliament also have to like him. If they do not approve the agreement then it would be back to square one with the discussions. However it seems that Boris and his Euopean colleague Jean-Claude are now the best of friends.

Since being more left alone in the evening, due to Mr. Swiss earlier bedtime, I am getting all the British news from the BBC TV station.

Today is again week-end shopping time. It seems only yesterday I was doing last week’s plan of what to buy and cook.  On Monday Mr. Swiss will be celebrating his eightieth birthday. Yesterday the lady at the local village government phoned to say she would like to call past on Monday afternoon to congratulate him personally. It seems to be the custom in our village and a very nice gesture. Otherwise we have nothing big planned, although I will be going shopping in the morning on Monday instead of the afternoon for a change. 80th birthdays only really happen once. 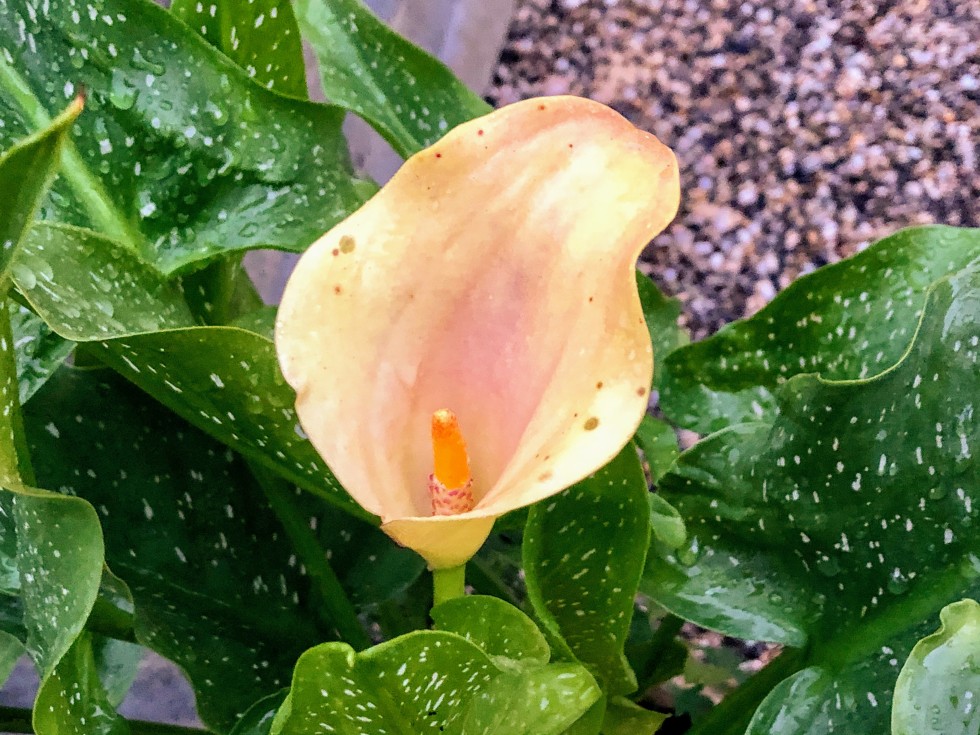 My surprise late arrival of a calla in the garden pot is still hanging on. Autumn really has a few surprises this year. I have never known such a mild Autumn as this year. The rain keeps itself to the evening and night and during the day the sun shines regularly.

Have a good day everyone – until later.