Another one of my morning posts, written the evening before. What fun we have with computers shifting time just to please us. I took this photo at the unearthly time of 7.00  a.m. which is half an hour earlier than normal. The sky certainly has an interesting mood so early in the morning. It was all part of the dental task this morning. Having to be there at 9,00 I needed the extra half an hour. However everything ran more or less smoothly and I dropped Mr. Swiss off at the dentist in time. I then returned home and began the morning housework, waiting for the telephone summons to pick up Mr. Swiss. I was finished with my work early and still no phone call.

Generally I clean the doors on Monday morning (just half an hour work, no problem) so decided to risk it and do it whilst still no Mr. Swiss. I was just on the finishing touches when the phone rang. He had survived and I could pick him up. 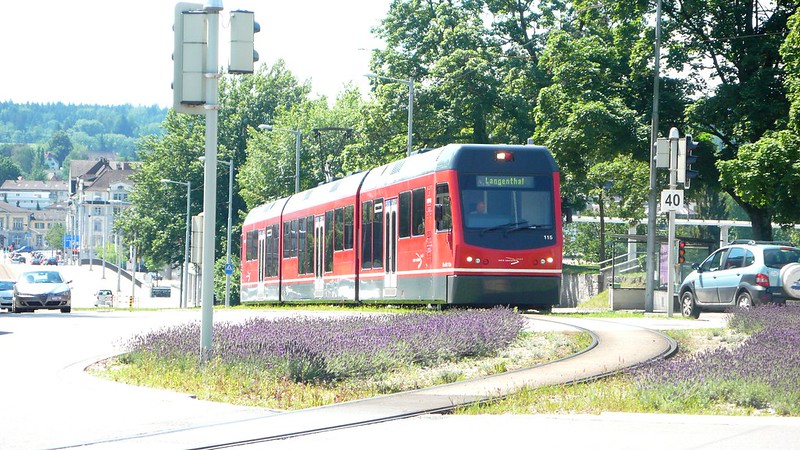 I had a small problem on the way. This is our local train approaching the top of the hill and I was waiting in my car to go. One car after the other continued and it was my turn. Unfortunately there is a small problem with the lights. It can be that you have crossed the white line to go further and the light changes to red behind you. Of course you do not realise this, and this was my situation this morning. The local train is actually god and no-one disobeys it and this train was getting nearer and I was trying to squeeze my car away from the railway lines when suddenly god (the train) stopped. I had done the impossible. I had forced the train to stop. I looked up at the driver high on his seat and he waved me on. He had stopped the train to allow me to pass. Of course I waved back as a sign of gratitude, thinking how embarrassing.

When I arrived at the meeting point for Mr. Swiss I wanted to let him know I was there, as he waits in the dentist surgery until he gets my call and yes, I had forgotten my telephone at home. I parked the car and hobbled towards the surgery with my stick and as luck would have it Mr. Swiss was already walking towards me (also with his stick), so no problems.

This afternoon I was off shopping and collected with various medicines in the chemists shop for Mr. Swiss.

Tomorrow morning, a repeat performance, but it will not be so long. I also have the cleaning lady tomorrow, so will fit her in whilst I circulate in the traffic for Mr. Swiss. Same routine as today, but not such a long appointment. All going well, I should even serve up a lunch at midday. My next drama will be Thursday afternoon when I have to get my summer tyres changed to winter.

And so I wish you all a good day no stress and take it easy (easier said than done) and here is a photo taken outside this evening. As it was only with my mobile camera, the quality is not so good but it makes a change from the sunny blue morning skies.