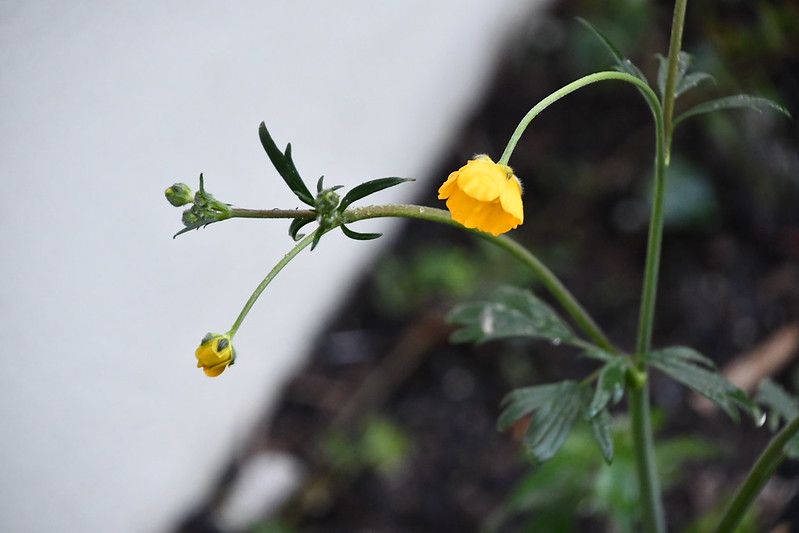 Just a simple flower that suddenly decided to grow in my garden, all on its own. Apparently it is a Creeping Buttercup. This one decided to stay where it is and crept no longer until my gardener decided to remove it. 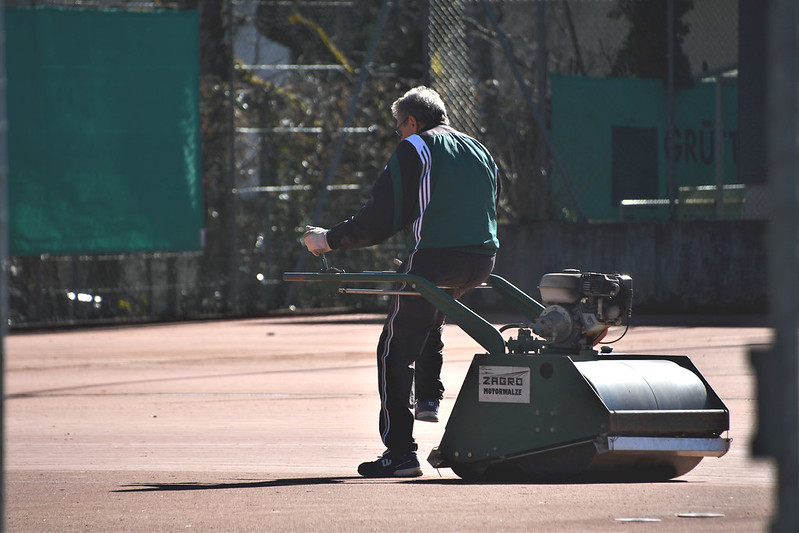 The loneliness of the tennis court man, flattening the surface. Walking back and forth with the machine. No-one is watching his steps or feet work and applauding his success. He is in the background, making it all possible. He is picking up the tennis balls left carelessly by those that play tennis and putting them in a neat pile in the corner.

He reflected on the days when he was on the court, known for his accuracy with the tennis racket. He beat them all, a champion, he had left his mark in the world and now he was flattening the surface regularly perhaps in another world. If only he had not thrown his money away on drink, it was the death of him.

Many wondered how perfect the tennis court was, never a stone out of place. It was also strange the find the pile of lost tennis balls every morning. Jack the caretaker often wondered. He would arrive in the morning to find it all so perfectly flat.  He never saw the tennis court man with the machine doing the work during the night, but ghosts do not appear during the day.

This kalanchoe entered my home last April. Almost six months later it is still flowering. I discovered 6 new buds this morning. Probably not so impossible, but I am thrilled to see that it survived the summer outside. I put it in a shady place if there was a storm, but even then I forgot it from time to time. I only give it a little water once a week, but it seems to be thriving on love and fresh air. It is now in my living room opposite the window producing more flowers. 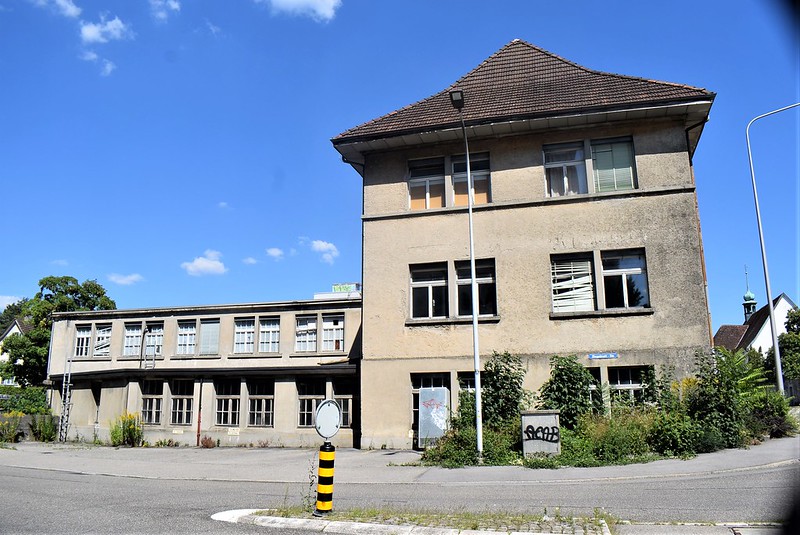 I remember when this used to be a factory with employees, a small factory, but with machines and supplying work. One day it was closed down and left to deteriorate. 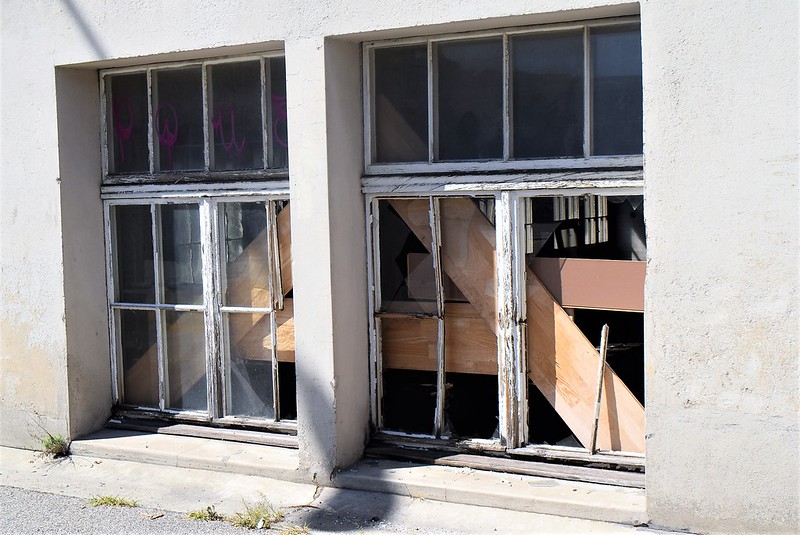 The windows were boarded up, those that were still there. Most of the glass had been broken in the meanwhile. 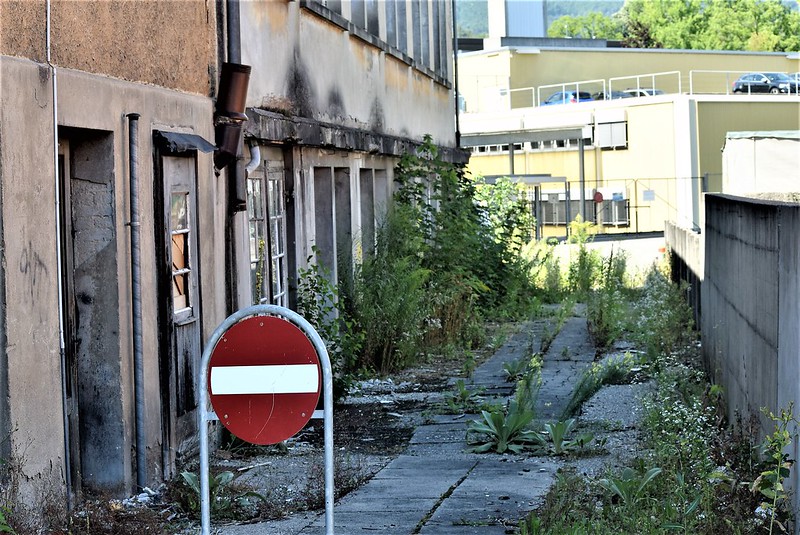 And the small area at the back of the factory had been left to itself. It was once the outside area where the workers could take a break in the fresh air and perhaps smoke a cigarette. It is now forbidden to enter and nature is taking over.

It has been in this condition for at least 20 years but now at last the ground has been sold. The factory will be completely demolished and in the meanwhile it will become a car park for another factory in the area. Later it is planned to build a new factory. At the moment it still stands there boarded up. Yes, even Switzerland has its ruins. 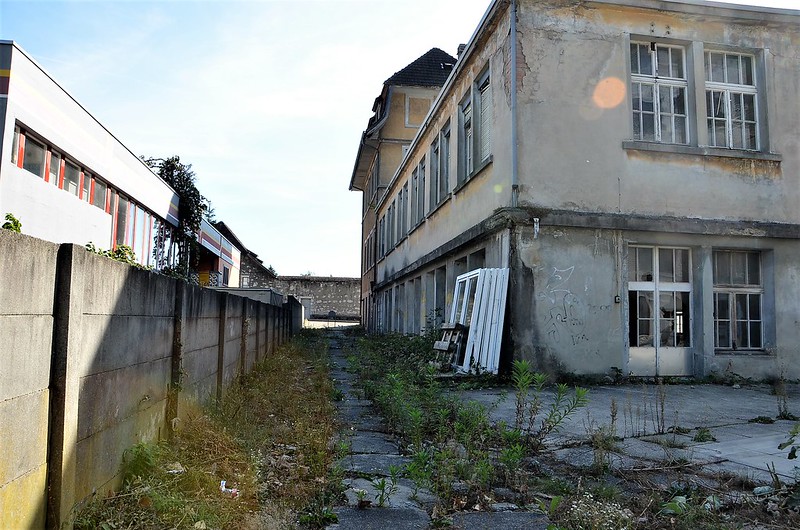 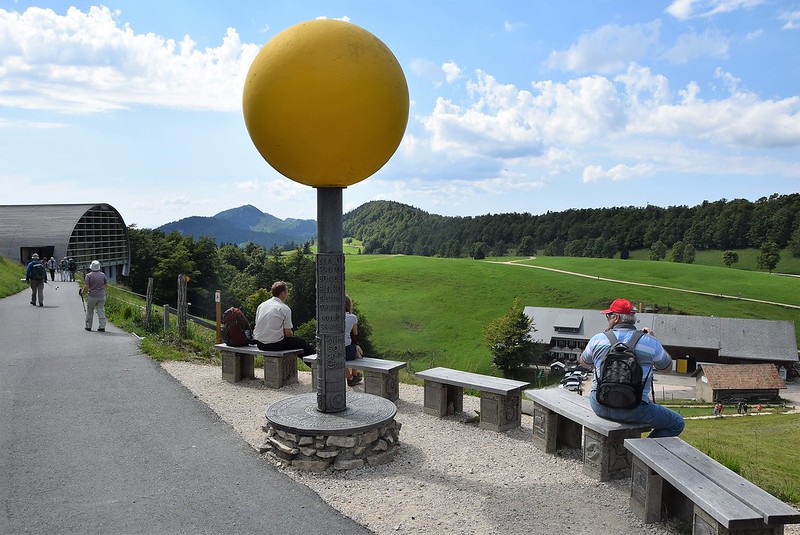 On our local mountain, the Weissenstein in the Jura range. we have the beginning of the Planet path. Here is the sun behind the restaurant, where it starts. As you follow the path you arrive at the other planet monuments on the way, all placed in the scale of their distance.

Unfortunately the distance was too far for me to walk to find Pluto or the other outlying planet monuments.

I was out in the evening yesterday and took a few photos of the evening sky. This was one of them. I was sure that this morning would just be a grey lid over my head and I was right, Again it rained a steady drizzle throughout the night. Good for the garden but not so much for a positive feeling. However, it is not too cold, although definitely now an Autumn touch in the air.

With all this talk about the climate changing I suppose I can be glad that I still have a crow perched on the neighbouring roof. I hear them constantly as they call to each other, but no longer see them so much on group flights.  I even put out a bread remainder this morning, but up to now I have had no customers. At some time during the morning they arrive, when I am not looking, as by lunch time the bread has disappeared.

Yesterday I was determined for a day of rest and relaxation. It would have been nice to go to town and take a few photos, but afterwards I spend at least an hour uploading them into various places on my computer and online and have nothing left of me time in the evening.  Mr. Swiss is continuing with his newly found occupation of discovering his old camera and taking photos. I said he could have my Canon camera, not realising that he actually has a Leica pocket camera: an excellent camera. Although he has had it at least 10 years it is still as good as new. I shall have to try that one out myself, although it naturally does not have the possibilities of my Nikon DSLR 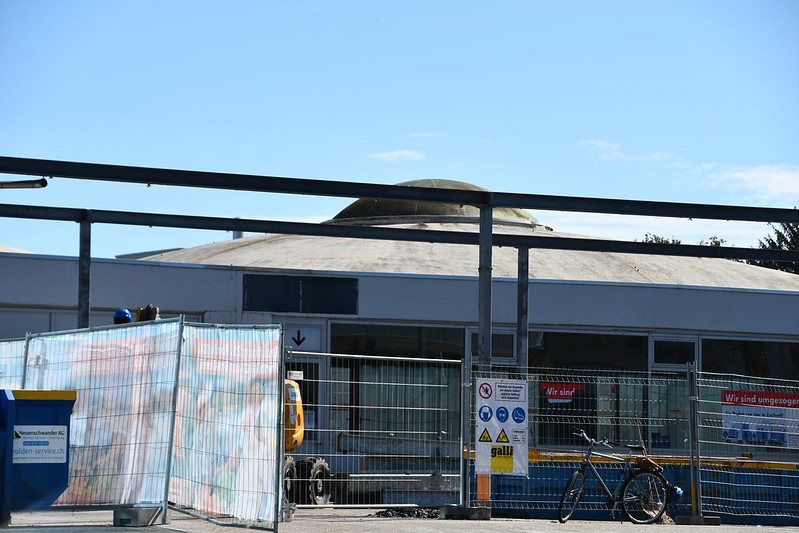 I mentioned some time ago that at last the promised remodelling of our old garage handler has begun. It is on the main road, about 10 minutes walk from us (with the local train just two stops – a couple of minutes) and it will be converted into a supermarket under the same ownership as the one I use now. It means a short journey for shopping, although not easy to reach with the car as it will be on the opposite site of the road and I am not sure if it will have enough parking places. However by train, even wheelchair, it would be within easy reach and I could easily use my walker to go shopping if I take the train. I am thinking about it. Even Mr. Swiss could come as well as it would not be so far for him.

The complete make over will only be finished in November, so I have plenty of time to think about it.

Yesterday evening I was again in front of the TV. I actually wanted to read, but somewhere along the line I fell asleep in the armchair and so my Kindle remained untouched. If the rainy weather remains today I again will not be going very far.

I still have some finishing touches of Autumn colour in my garden which also has its charm.

In the meanwhile the birds have realised the feast I laid out on the lawn for them. First of all a crow arrived and stuffed his beak full of bread pieces, and afterwards a magpie appeared, although she only took one piece of bread in her beak. They have better table manners than the crows. I noticed a few of the smaller varieties in the surrounding trees and bushes but they tend to stay away until the big birds have made their choice.

Yes the seasons are changing and nesting and bringing up the babies is over. Now they have to fend for theirselves, so I like to help them on the way. There are so many people that seem to know it better, saying you should not give them  bread, and not start too early until they find nothing more. Wait until the cold weather arrives, but they have to survive until the cold weather is here in my opinion so I have decided, at the age of 73, I will do my own thing. I need not more “helpful” advice from those that know everything better and the birds have not complained up to now.

So life goes on, I am now off to do the daily routine and at least have my computer to break the monotony. Have a good day everyone.