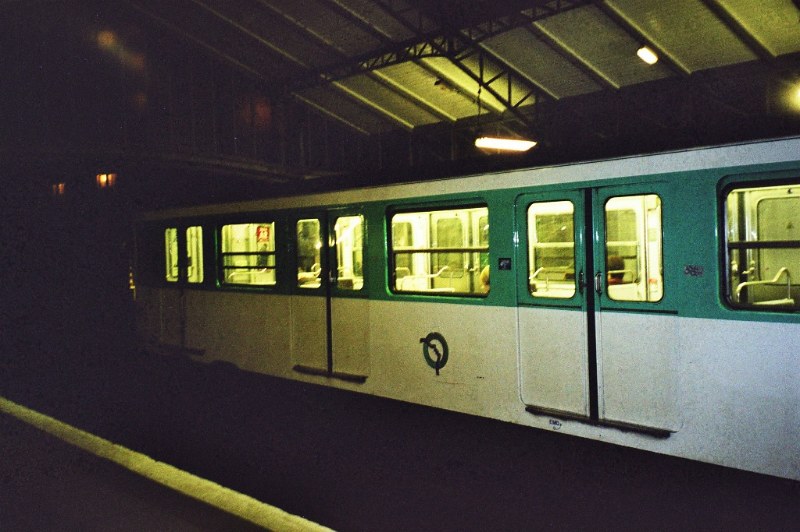 She hated taking the last train in the evening, but there was no choice. The party dragged on into the late hours of the evening. Everyone else lived near, but Joan lived in the next town and it seemed that no-one was travelling in her direction. She was alone on the platform when the train arrived. It was also a very dismal train, the lights were flickering on and off as she boarded and it looked quite shabby inside with faded upholstery on the seats. Even the outside looked as if it could do with a wash. There were traces of grime everywhere and the paint was peeling off here and there.

She was thinking about calling it off and taking a hotel room for the night, but then she heard the whistle of the train guard and jumped into a carriage before she had time to change her mind.

There was no need to search for an empty seat, all the seats were empty, although she suddenly saw that someone was also in the corner of the carriage. She really did not notice him when she took her place, otherwise she would have moved to another carriage. Not wanting to appear impolite she remained where she was.

The train moved on and was soon in a tunnel. “Funny” she thought “I don’t remember there being a tunnel on this route”. It was mainly open fields. She heard a noise. The lights were still flickering on and off and in the light in between she noticed that the other passenger had changed his seat, moving a little nearer. It was then that she had a closer look. His complexion was so pale. Absolutely no colour at all, except for his eyes. They looked a little bloodshot and so Joan came to the conclusion that it was probably someone who had a night on the town and had one too many to drink.

Suddenly they drew out of the tunnel and immediately her travel colleague moved again, a little further down the carriage. Joan was glad as she was beginning to be just a little worried. And then came the second tunnel, and the game began again, but now this strange white faced person was in the next row of seats looking Joan direct in the eye and his lips had curved just slightly as if he was going to smile.

This was enough and Joan left her seat and carriage and moved to the next carriage and what did she see? The vapid face of the mysterious red eyed guy already sitting in a seat. How was this possible she thought, I have just left him behind. He must have flown through the air. It was the next tunnel that bothered her because she now realised that he would be moving nearer again. So many tunnels on this line she had never experienced and they were getting longer. She also noticed that the flickering lights were no longer flickering so much and remaining in a dim light.

The next tunnel: her colleague with the pale face was now sitting opposite. And now he smiled showing a row of quite sharp teeth.

That night Joan did not arrive home. They found her body on the railway tracks the next morning. It was not a pretty sight. It was thought that the train door was not locked correctly. There had been a few problems with doors on the carriages not locking well on this line. It also seemed that another train had run over Joan whilst she was laying on the tracks. She had lost a lot of blood and could only be recognised by the witch costume she was wearing. Oh, and I forgot to say it was 31st October, the night of halloween and Joan had been celebrating with her colleagues.

11 thoughts on “FOWC with Fandango: Vapid”