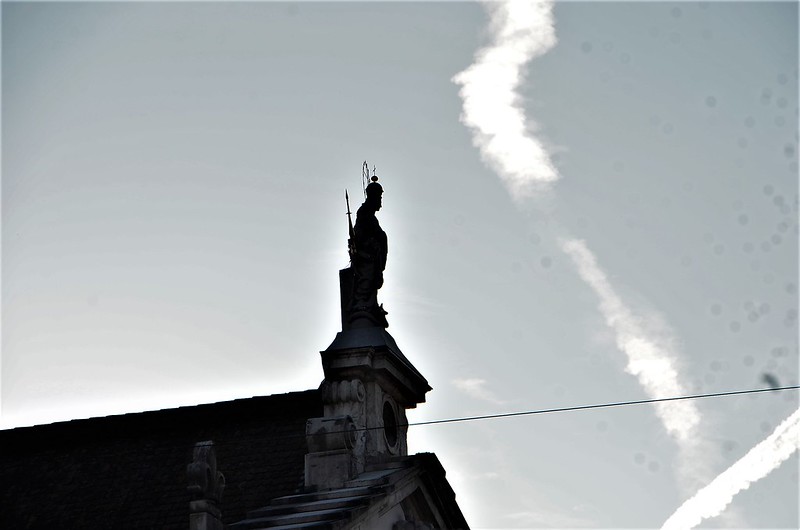 There are just some things in life that cannot be explained, but they happen. It was my turn to do the daily shopping. Brother Domenicus gave me a list and I made my way into town. It was then that it happened. “Oh Lord, please forgive me”. It was not that a ray of sunshine struck me and illuminated my person, or that I heard a choir of angel voices. No, nothing like that at all, it was a stormy day, grey skies thick with clouds and it had started to rain. I must admit when I saw it lying on the road, absorbing the first rain drops, there did seem to be a very loud clap of thunder, or perhaps I imagined it. To continue, it was a lottery ticket; some poor soul hoping for success in life, for a reward for his existence on the earth, had bought a lottery ticket and lost it. Why should I, Brother Innocence, find this ticket? What fate had brought me on this day to stumble upon this ticket.

Perhaps I should explain further. I am now writing this down, and will show everything to the abbot tomorrow morning, only then will I received perhaps understanding for my crime against our community and forgiveness, even absolution. It might be my last day in our community, my last day with my brothers who have looked after me for so many years.

When I reflect on the past, after my twenty years as a monk, I have never regretted my choice, although perhaps it was not my choice but guided by a power greater than any on earth. In my younger days I was not an example of purity. Oh yes, I sinned, but from my sins I learned, although it was not easy.

I remember the last words from Shifty, my boss of our street gang.

“Jeff” he said using my worldly name of the time, “it will only be for two years. Something went wrong at the bank robbery. I know you were only keeping a watch on things, while I was in the bank taking the money, but it was you the police caught. You cannot dream how upset I am, but you must take the sentence upon yourself on my behalf and that of the gang. When you leave prison your rewards will be given and a life as my second man will be waiting for you.”

Of course I was flattered. At the age of 30 years, two years later I would still be a young man and my life at Shifty’s side would be a guaranteed success. Unfortunately Shifty never took it so exact with the truth. I got fifteen years, which admittedly were reduced to ten through good behaviour, and I never saw Shifty again, although I did hear that he was shot by a rival gang wanting to take over his territory. I suppose the paths of the Lord do sometimes find the right way; back to the story.

My life in prison was not so bad. I think it was the first time in my wasted life that I had regular meals. It was then through a prison colleague I heard that if I attended the regular Sunday church service, conducted by the brothers at a near bye monastery, I would be exempted from kitchen duties on Sunday. Hey brothers, this was ideal. I did not dig religion really, the only time I saw the inside of a church was when I robbed the offering box for a few coins to buy some beer. Oh Lord was I a sinner.

So as time past, I really enjoyed the services. One day one of the monks, Brother Hubertus, took me on one side after the service.

“Jeff, I think inside you are a good man. I notice the way you are involved in our services with your heart and spirit; when will you be leaving the prison?”

“I have a year of my sentence and then I will be free.”

“Have you ever thought of joining us at the monastery? You would be welcome and my brothers also find that you life has been a combination of unfortunate circumstances. Please think it over.”

So I started to think things over and when I left the prison I visited Brother Hubertus at the monastery. He showed me around and I liked what I saw, perhaps still thinking about the square meal I would be getting every day. The praying did not bother me at all, and after being cooped up so long in prison, I decided that work in a monastery garden would be just the thing. Brother Hubertus informed that I would no longer possess any worldly goods and everything I owned would belong to the monastery. Well those few pennies I had, I decided I would not miss. Things just sort of happened and here I am today, Brother Innocence, twenty years service in our monastery.

I felt good, I did not even miss the women, I had my colleagues, my brothers. Then I found the lottery ticket. I put the ticket in the folds of my long brown monk’s frock and almost forgot it. It was then that I was on the way again for Brother Domenicus and I saw the poster announcing the winning number – Hallelujah, it was mine. Not quite hallelujah, how can a monk win money. Something of my past must have remained, and I decided to see if Lofty, Shifty’s brother, was still around. He owned a restaurant down town so I entered by the back door and asked to see him. I was a strange figure with my roman sandals and brown frock, but I think the kitchen personnel took pity on me and gave me a paper bag with fresh bread to take to the monastery for my brothers. There is always something good in mankind, if you search long enough.

I asked for Lofty and was he surprised to see me. He said he always respected my choice for going to prison for his brother. I then made a proposition and he accepted. For ten percent of the lottery win he organised everything for me. I was probably the only monk with a bank account. Lofty was happy, it was not a small sum, and he agreed to follow my instructions in dealing with the profit.

So Lord I have written it down, my sins are now in black and white, and heaven help me to explain the whole sinful work to the abbot.

The next morning after morning prayers we were all gathered together in the breakfast room and the abbot entered and took his place. He began to speak, looking at each one of us with concentration. I was sure he suspected something. These were his words,.

“Brothers it was my intention to call you together with some bad news today.”

My heart skipped a beat.

“As some of you may know, our small group has been threatened with reduced funds. Today no-one has a heart for each other, and donations are far and few between. I had started to make arrangements for the dispersal of our group and with heavy heart to send you all, my good friends and brothers, to other monasteries, perhaps even to retirement, no longer to spend our happy days together helping mankind and living in this place we have called home for so long.”

There was a murmur amongst my brothers, and some of the older colleagues had tears in their eyes.

“However, brothers, we have been saved. Somewhere in this world someone looked upon us with mercy. Yes, the Lord does indeed move in mysterious ways. Today I have been informed that we have received a donation, not small, enough to ensure that the monastery will exist for many years. It was anonymous, we do not know where it came from, but we are saved. We will now say a prayer for this person and will keep him in our thoughts for always. Amen”

So what did I do, well what would you have done in those circumstances? I said a big prayer for the donator and decided that I and the Lord would definitely see eye to eye with the solution.

2 thoughts on “FOWC with Fandango: Clemancy”