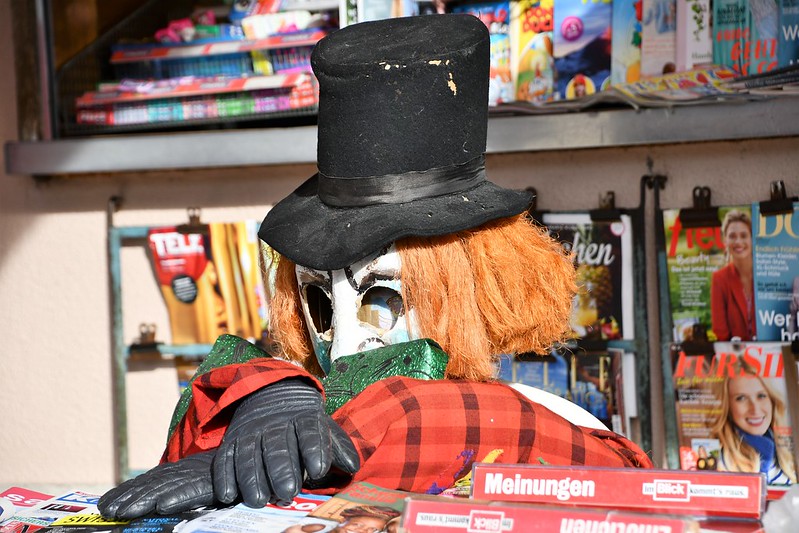 I don’t know why people don’t like me; after all I am a doll, a clown and was made to make people laugh. Just an example, there I was standing on a nice comfortable chair in a second hand shop, just waiting to be the chosen one. I was not really second hand, but no-one had ever wanted me, so this was my destiny at the time.  It was Christmas and there were parents with their children all over the place. Not that I don’t like children, but let’s face it they can get on your nerves sometimes. I have heard that if they don’t happen to like a toy, or they get bored with it, they just throw it in a corner. Under the worst circumstances it might even get thrown away. Anyhow I am a single piece really. They sort of made me in the factory and then decided that there was something wrong. The smile on my face wasn’t so friendly and the colour. They had the idea that clowns should wear big shoes, which is a bit ridiculous. Have you ever seen a real clown with feet size sixty? I don’t even try to smile, changing things is not possible for me, I am just the way they made me. So there was a little girl that came up to me in the shop.

“Look mummy, what a horrible face he has, and big feet.”

“But honey he is a clown, they are made like that. He is made to make people laugh.”

“Well mummy, I don’t want him. I don’t find him very funny. He couldn’t even make a hyena laugh.”

and that was the story of my life up to the day when Dr. Foster entered the store. Christmas was gone and all the unwanted toys and dolls left were put into cardboard boxes to be put into the cellar, and brought out next year. I know the routine, it happens to me every year. So the boxes were standing in the corner waiting to go, when he arrived. He put his hands into the boxes and started pulling us out one after the other to have a good look. Then he spoke the magic words.

“How much for the ugly looking clown?”

“Oh you can have him for a quarter of the price.”

I was insulted and annoyed. A quarter of the price, not even so much as half price.

And so that was my meeting with Dr. Foster. He took me home and a day later I was perched on a cupboard in his doctor’s practice. He was no normal doctor, but worked in the local prison, looking after the misfits and thrown outs of society, the ones that no-one wanted. He was supposed to be a psychiatrist, although I never saw a certificate hanging anywhere with his qualifications, but a change came into my life, I was loved.

I remember my first meeting with Fred. Now he was a hard nut, had killed a few people, just for the fun of it  and was serving a life sentence. He didn’t say much, but I could feel his thoughts prying into my mind. Dr. Foster would spend an hour with Fred once a day in therapy, although Fred was beyond therapy, he was beyond everything. Where I came into the treatment? Well Dr. Foster told Fred that he could keep me in his cell and treat me as if I was his son. That meant, be nice to me and look after me. I think the idea was to make Fred into a civilised person. Well Fred really did like me. Fred just had something against people that smiled and I never smiled of course. I noticed if someone tried to be friendly with him he would act quite hostile and start throwing things around and even try to kill them.

So Fred and I got on well. At last I felt wanted in my lonely life. I had someone that needed me and cared for me. I was quite happy, but then came the day when Dr. Foster decided his therapy was not working and told Fred that I would have to leave him for another patient. Fred was quite annoyed. Actually he got so annoyed that he strangled Dr. Forster and burst through the door of Dr. Foster’s consulting room. Of course there were guards outside, but Fred was so mad at losing me that he attacked the guards. Now you might think one man against two armed guards was a lost cause. Well not really. Fred was so powerful and the guards were not ready for such an attack that he managed to get the weapon from the first guard and shoot him and his colleague with it. He then found the nurse that was hiding behind the desk and used her as a hostage to get us out of the prison. The main thing was Fred took me with him. Now I am happy and satisfied, I have someone that loves me and who looks after me. I am even allowed to sleep in a little bed next to Fred’s bed. Fred a bad man – no not really. It seemed that Dr. Foster’s idea of having someone to look after worked, as since we have been on the run, Fred has not killed anyone else. We just live happily together on a small farm in the middle of nowhere. If you happen to find us, then just drive past. Fred just does not like having visitors.

FOWC with Fandango: Anyone

9 thoughts on “FOWC with Fandango: Anyone”