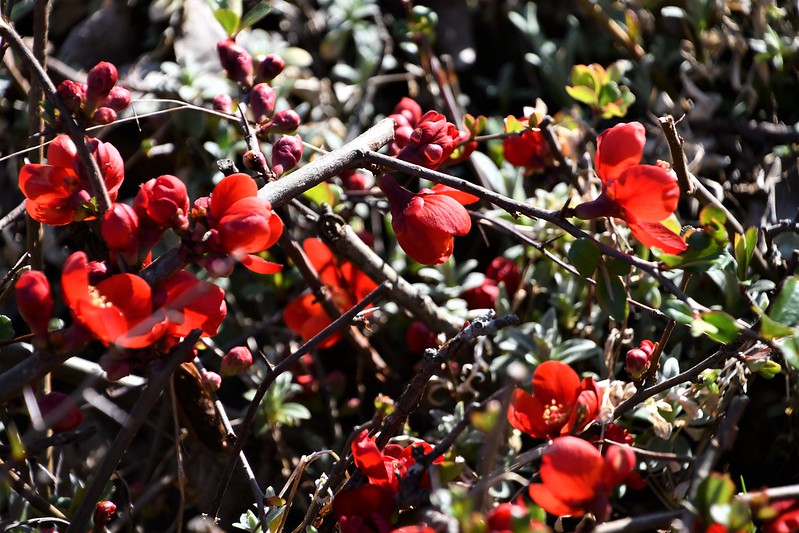 These grow in our estate and I really did not know what they were. Internet tells me the name is Maule’s quince. Who Maule is or was I do not know, but at least I now have a name for a flower. 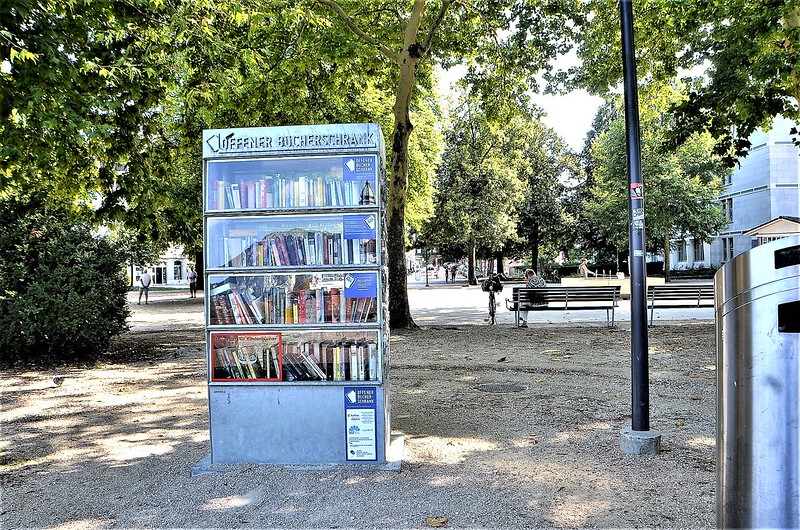 “Then you should have been a bit quicker to take it.”

“Come back in a couple of weeks when I have read it and replaced it. In the meanwhile choose another book.”

“But I want that book. It is the story of the television series showing at the moment and I want to find out who did the murder.”

“No problem it was the gardener.”

“Oh thanks for telling me, now you have spoilt the story for me.”

“Be glad, now you don’t have to read the book to find out.”

“But if you knew who the murderer was, why are you reading the book again?”

“You are right, you can have it, I will take another book.”

“But I don’t want that book now because you have spoilt the plot for me.”

“You should really make up your mind. It seems we have the same taste in literature.”

“That’s what I was just thinking. Did you read the one where the wife poisoned her husband and only married him for his money.”

“You mean the one where she was known as the black widow.”

“Yes, that was really a good book.”

“Just a minute I will help you get that book from the top shelf. Looks like a good one.”

“Our tastes I suppose. I think I have had enough of borrowing books in the open air book case in this cold weather. What do you think, shall we go to that café over there for a coffee?”

And so they became the best of friends just by wanting to borrow the same book.

This afternoon I took a quick drive to my local store to tank up on gas. Of course we have gas pumps everywhere, but I have a special card for my store which gives me points when tanking up. It is all done online with the points and if I go on Sunday afternoon I am on my own and have the pumps all to myself. I am still a bit of an amateur and do not need any spectators and like to pick my own pump and not have to wait. This has nothing to do with being infuriated of course, but on the way to the store I noticed there was a little infuriation. 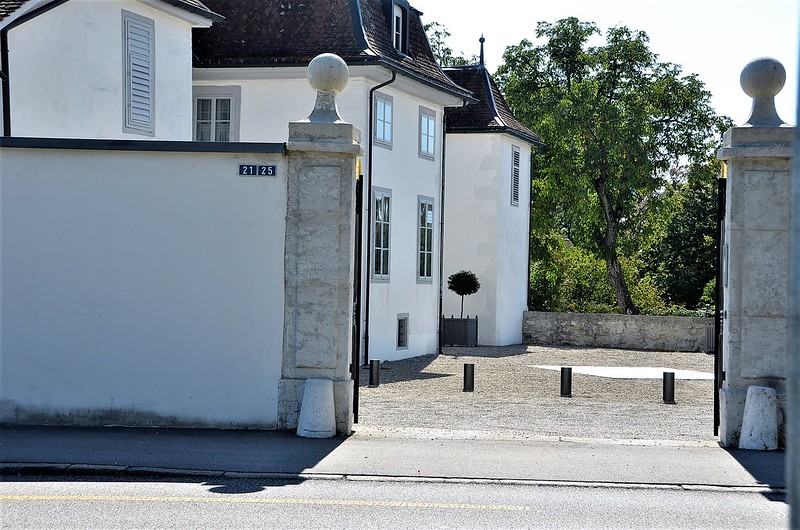 On my route I drive past this house: not really just a house but a mansion which belongs to one of the more well situated. Actually the guy died a couple of years ago, but his daughters inherited it all. He was a businessman and made his fortune mainly in London, was born and grew up in our local town of Solothurn and has quite a nice home, villa, mansion.

As I drove past I had to avoid a police car that was parked by this entrance. The police guy was talking to one of the daughters on the street and as I drove further a second police car crossed my route and also a police van. Was there  a break in? There is certainly enough worth taking in this mansion. 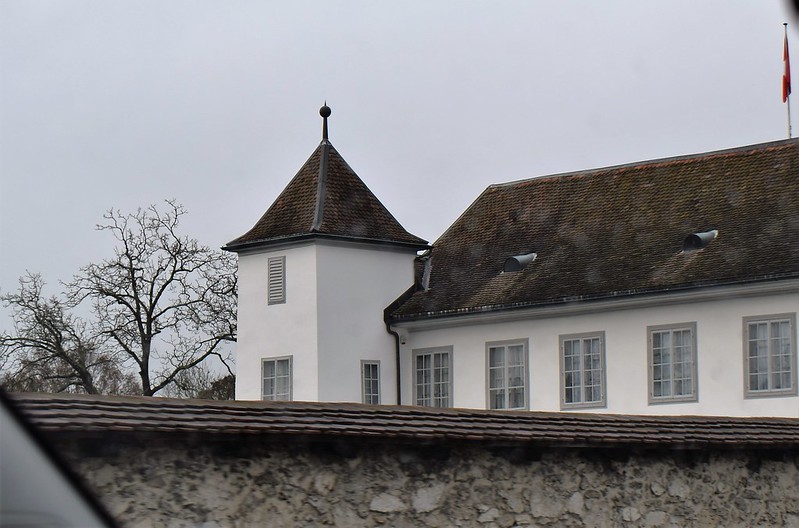 It is quite an imposing building and its main attraction would be the so-called baroque garden with its bushes cut to exact shapes. 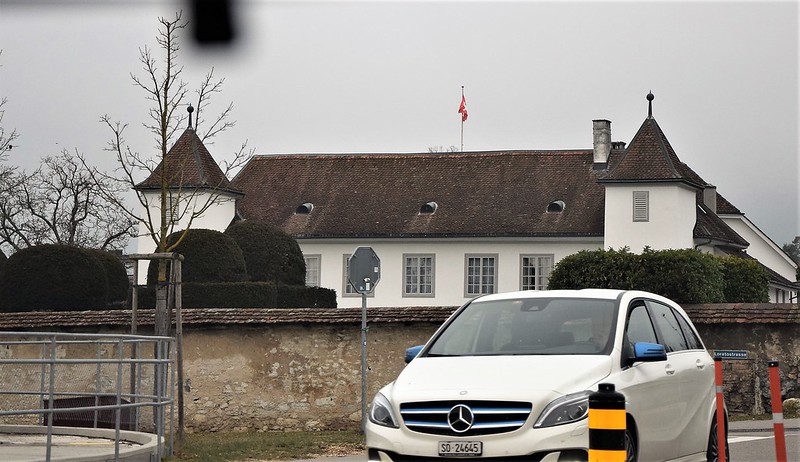 The gardens are opened to the public for two days during the year, usually in June and I intend to visit them once with my camera. You only get a little peak at their shapes as you pass by on the neighbouring road.

So now I am looking forward to seeing the newspaper tomorrow to discover what the infuriation was all about that such a large police visit occurred – at least it was large for our little market town.

I did my usual morning excercise of firing up the computer together with my cup of tea and slice of bread and honey. We do have plates, but for my breakfast a piece of kitchen paper does the job quite well. I had a lazy day yesterday and decided to stay at home during the afternoon. I was cooking chilli con carne for the evening meal and dealt with a couple of blogs. I enjoy talking, but as I rarely have someone to talk to writing is a good substitute. Mr. Swiss likes to relax in his golden oldie days, and we have been talking for the past 50 years, so who needs words at our age.

I must go and tank up my car today as the gas is getting low, although that red light is not yet showing. I prefer to go on Sunday. The tank station is not far away, at the local store, and on Sunday everything is closed, so I am usually alone with the gas pumps witout the crowds of shoppers. Since buying my own car at Christmas, I have to get used to the situation again. One of the first things I did was to organise a special card at the suprmarket for the gas station. It makes the job a lot easier.

Lunch is also already on its way. I have a piece of beef which I am cooking slowly until midday with some veg in a nice broth and potatoes. My platt bread has also been baked for the evening, so what could possibly go wrong.

In the garden everything is looking fine. I think my rudbeckia have almost decided to flower until at least the end of Autumn. I have never seen such a display as this year. Sunday can now come and go. I have no appointments for next week. Mr. Swiss is now finished with the opticians until the end of October and is quite happy with his new eyes. They look the same as the old eyes, but he can see much better.

And I should now move on to my various little chores like a shower visit and a general clean up. I have been training over the past few weeks by using my walker as little as possible and it is working. I seen to have better strength in my legs meaning things get done quicker. I also got a new toilet seat in the shower as the screws on the old one began to disintegrate and it is really astonishing the helpful progress that such a simple article makes over the years. It no longer bangs down but descends gracefully with a sort of braking rhythm. Also with the press of a button you can lift it off completely making it much better and quicker for cleaning purposes. I am really thinking about getting second  one like that fitted in my bathroom.

Enough talk for this morning. My kitchen is now full of the smells of beef broth which is giving me appetite for lunch already.

Sorry cows, but there are no vegetarians or vegans here. My dad always found there are enough cows walking around and with his basic ideas, they must be there for some reason, although these cows are exclusively for milk production.

Have a nice Sunday, take it easy or sleep well. See you around later, I hope.